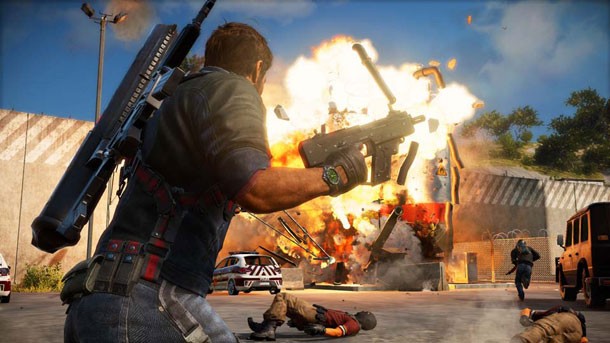 Rico Rodriguez comes home in Just Cause 3, bringing revolution and his arsenal of devastating toys to the island nation of Medici. Sebastiano Di Ravello may keep his citizenry under tight control, but Rico’s been through this before. He’s never met a dictator who couldn’t be toppled like a statue or who had the military might to endure an extended campaign of sabotage. Players may find their enthusiasm flagging at times, but it’s hard not to cackle with glee after watching yet another base bloom into a fiery blossom.

After successfully freeing the citizens of several other nations, Rico turns his attention to his homeland. He’s the same vessel for destruction that series veterans are familiar with, a freewheeling maniac who can hijack a helicopter at whim and rain down revolution with a blast of the minigun. He’s not the type who overthrows governments by patience and diplomacy. Instead, players crisscross around this open-world sandbox, tearing down propagandist billboards and other instruments of oppression and raising the flags of rebellion. 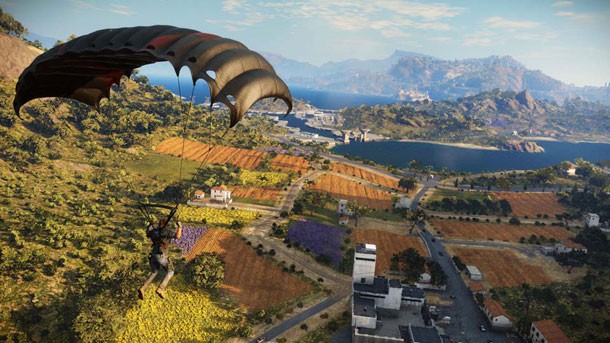 I spent a lot of time dominating the skies as Batman in Arkham Knight, and at first I found Rico’s grappling, parachuting, and wingsuit-based flight comparatively clunky. It didn’t immediately click with me, and many of my initial test flights ended by accidentally skidding to a halt on the ground or, more painfully, slamming against cliff faces. Once I got the hang of the timing of using my grappling hooks to create and maintain forward momentum, however, getting around Medici became second nature. It involves a lot of skill and nuance, but the added mobility is worth those early stumbles. Traversal is so efficient that I almost never drove; cars aren’t nearly as nimble, and the roads wind so much that they’re rarely a direct path to Rico’s next destination.

Rico’s grappling hook can also magically connect several items together (it’s best not to dwell on how), opening the doors for an impressive amount of destructive creativity. In its raw state, you can only use a couple of the tethers, and they’re not particularly strong. Complete enough challenges, and you can earn upgrades that increase both the number of cables that you can use at once as well as the pulling strength of those cables. When Rico’s adventure begins, he can barely hoist a jeep against a wall, let alone smash a pair of pursuing enemy helicopters into one another. You manually choose when to engage the pulling action, too, which lets you set up elaborate base-ruining connections. There was something particularly satisfying about silently moving around an enemy camp, rigging up the various gas tanks, generators, and other objects, and then flying into the air to get the best view as you set the mayhem into motion.

As exhilarating as these moments are, all this destruction feels routine after a while – especially if you make a goal of blowing up every military outpost and freeing every city. Sure, you can connect a bad guy to a gas cylinder, shoot it, and then watch as this crude rocket blasts him into the stratosphere. Those kinds of scenarios can be tough to pull off while you’re being shot at, so I often resorted to tried-and-true methods, such as yanking a car toward a baddie or simply tossing a grenade or two. The auto-aim is generously tuned so that you can knock out a set of propaganda speakers while sailing on a parachute, but it comes at the expense of making the on-foot action feel mushy. Once I figured out reliable ways to tear down statues of Di Ravello or water towers, I usually stuck with those, and flew away from the inevitable enemy response until the heat died down. Things feel fresh again when you unlock some of the higher-tier explosive weapons, but those don’t arrive until the game is well under way.

Rico’s reunited with his old friend Mario, as well as several other supporting players including the shady Agency operator, Tom Sheldon. The story is kept at a minimum – the setup is shown in series of vignettes during the opening credits – but Avalanche kept my attention with these brief interludes. Even though Rico himself remains a bit of a dud, Mario breathes life into the action with his goofball charm. Story progress is often tied to liberating specific numbers of provinces in a region, which are composed of several bases and towns. If the grind starts to wear you down, several types of side activities provide distractions. Races (of air, sea, and land varieties) convey a thrilling sense of being on the edge of losing control, though they are the weakest diversion. The frenzies, where you have to destroy as much as possible within a time limit, are a wonderful distillation of the Just Cause experience, and I ended up replaying them even after getting the highest possible ranking. The missions where you have to drive a bomb-rigged car to its destination before time runs out or use a giant magnet to attract valuable ore are also a lot of fun. 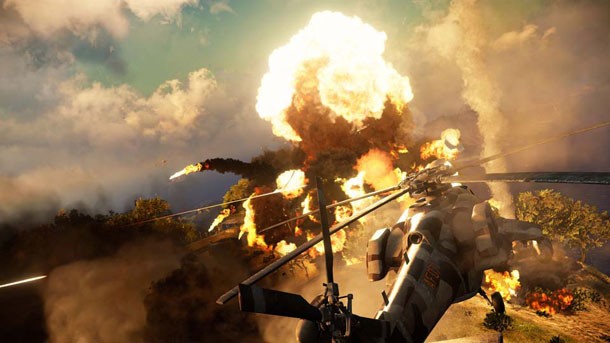 Medici’s three islands have an abundance of places to destroy, and I had a good time liberating the nation overall. Avalanche does a good job of giving players access to new tools just as it seems the novelty is close to wearing off, right until the end. By the time I finished clearing out the final outpost, however, I was definitely ready to move on. Medici’s a great place to visit, but I’m not prepared to make it a new home – certainly not considering the state I left it in. 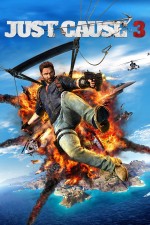 Players may find their enthusiasm flagging at times, but it’s hard not to cackle with glee after watching yet another base bloom into a fiery blossom.

Purchase More Info
8
i
Game Informer's Review System
Concept Free an island nation from dictatorial rule by blowing up nearly everything in sight
Graphics The visuals look great, even when the frame rate gets chunky during some of the most intense moments
Sound The explosions are punctuated with meaty thuds. The increasingly desperate explanations for Rico’s actions from the propaganda department are a fun post-mission reward
Playability Once the controls click, you and Rico do beautifully destructive things together
Entertainment Blowing up everything loses its anarchic thrill after several dozen times, but it’s still a blast
Replay Moderately high 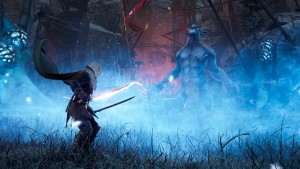