An Open World Game Packed With Spontaneous Excitement
by Jeff Marchiafava on Mar 23, 2010 at 08:57 AM The original Just Cause was a unique but flawed open world game. A variety of bugs, boring missions, and a complicated control scheme soured the fun of exploring the game’s gigantic tropical island. Avalanche’s second installment not only fixes these problems, but presents one of the most enjoyable sandboxes for players to experiment in this side of Grand Theft Auto.

Those who played the first Just Cause will be familiar with the premise. Rico Rodriguez once again finds himself trying to overthrow a maniacal dictator on a tropical island. To do this he performs missions for three different gangs to create Chaos, the currency that unlocks the main story missions that advance the plot. The story is Just Cause 2’s weakest link: It only becomes vaguely interesting towards the end when bosses (and ninjas) start showing up. Aside from their ridiculously bad and borderline offensive accents, the game’s characters are forgettable and one-dimensional.

Virtually everything else is improved, including the missions. You still won’t care why you’re supposed to be chasing down an informant or blowing up a missile as it launches into the stratosphere, but you’ll have a blast while doing it. Even the most formulaic side missions are still fun, thanks to impressive visuals, Hollywood-tuned physics, and smooth controls for the numerous tricks at your disposal.

The grappling hook and parachute still take center stage, and make navigating the environment a cinch. Whipping through tree tops and propelling yourself over cliffs and buildings with only inches to spare is exhilarating – especially when leaving countless explosions in your wake. After a period of acclimation, the controls allow for a level of precision that puts web slinging and bionic wife arms to shame.

The new ability to tether two objects together is less handy during combat, but can be a lot of fun when goofing around between missions. After toppling a statue of the island’s dictator by tethering it to my helicopter, I spent a good 20 minutes trying to swing the still-attached stone head into the traffic below me like a wrecking ball. An unseen overpass ended the hilarity in a fiery explosion, but not before giving me a dozen other ideas of things to try out.

Unlike franchises like Modern Warfare or Gears of War, Just Cause 2’s best moments are completely unscripted, the result of player-driven experimentation. It’s something the game actively encourages: There’s no penalty for dying outside of missions, and generous checkpoints during missions keep frustration to a minimum when something unexpected happens. Perhaps most importantly, the ability to call in a helicopter for extraction cuts down on mindless travel time when traversing the gigantic playing area. 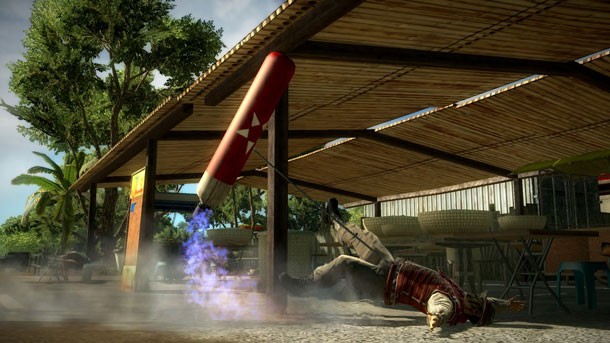 The new island of Panau is not only big, but sports a ton of variety. In addition to jungles, you’ll swing your way through forests, desert plateaus, and snow-covered mountains. Zooming out on your map to reveal the game’s total real estate is overwhelming, and while I’m not sure if it’s the largest open world game to date, the attention to detail is unparalleled and makes open-world games that focus solely on urban environments feel downright mundane.

Which is not to say Just Cause 2 is lacking in concrete, either, with a whopping 368 locations to discover and explore. You can check each location off your list by blowing up anything with the government’s insignia on it and collecting crates that upgrade your weapons, vehicles, and armor. Some of these locations are small fishing villages with just a few upgrades to find, while others are sprawling military bases with dozens of targets to blow up, or full-fledged cities filled with skyscrapers from which to base-jump. Rarely will the trip to a mission not get diverted by a new settlement to pillage, a high-ranking colonel to assassinate, or just a cool-looking vehicle to chase down and hijack.

In the end only a few disappointments surfaced. Until you upgrade your weapons or get your hands on some heavy-duty firepower, the gunplay feels underwhelming. Ammo for the more powerful weapons is usually scarce, limiting your time with the best of Just Cause 2’s arsenal. Later in the game the difficulty ramps up to levels that border on frustrating, with enemies spawning endlessly until your Heat level diminishes, transforming you from a lethal acrobat to a bullet magnet.

The biggest disappointment by far is the lack of multiplayer, which is understandable giving the game’s ambitious scope, but a missed opportunity nevertheless. But none of these issues diminish the countless memorable moments Just Cause 2 provides, born out of the spontaneous chaos the player creates while simply exploring the world.

To see Just Cause 2 in action, check out this exclusive 10-minute gameplay video.

9
About Game Informer's review system
Concept
Create chaos in an open world playground that spans more than 600 square miles
Graphics
The only thing more beautiful than the diverse locations are the explosions that blow them up
Sound
The voice acting is utterly ridiculous, and the soundtrack is unremarkable
Playability
The controls require practice, but feel great when you get the hang of them
Entertainment
One of the most entertaining sandbox shooters ever created
Replay
High 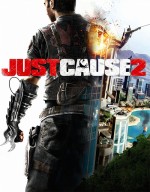