Emulating those better than you is one path to success. John Daly’s ProStroke Golf, however, does the opposite and still produces a fun game. Tiger Woods the man has proven to be anything but invincible, and there’s always room for competition in the video game realm. John Daly proves that there’s more than one way to hit a golf ball, and ProStroke Golf tees off with a strong drive but misses some shots here and there on its way to the hole.

The gameplay basis for the game is the aptly named ProStroke controls. These let you control aspects of your swing and ball placement by moving your feet, shifting your weight, and changing your club face. This differs from Tiger in that putting spin on the ball, choosing specialty punch or lob shots, and applying draw or fade are engineered directly from how you use the ProStroke controls – as opposed to jamming on a button for mid-air spin in Tiger, for example. Moreover, shifting your weight via the left analog stick as you swing your club with the right analog is a big part of getting more power out of your shots in ProStroke and adds another gameplay input, which is cool. 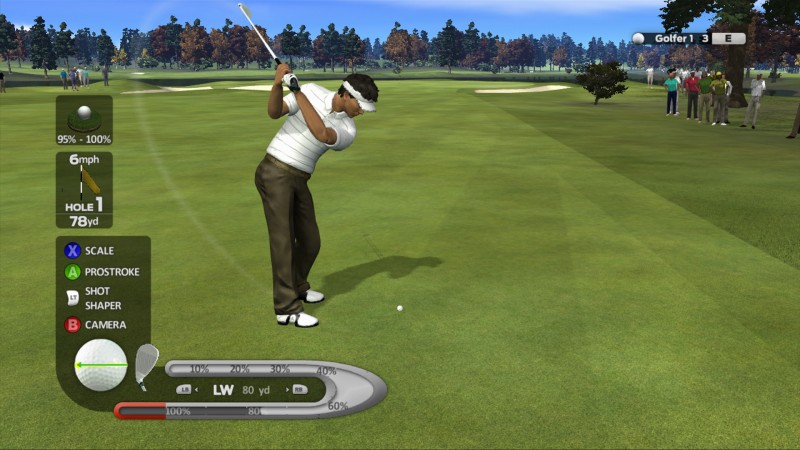 As much as I like the fact that playing John Daly isn’t the same as playing Tiger, there were times when I got results that were different than I expected. For instance, I never felt comfortable in my punch and lob shots, and I don’t think the percentages on the swing meter are 100 percent accurate. Still, I like how getting a good swing in the game is more about feel than it is just reading the meter.

Although I’m encouraged that John Daly has a good gameplay foundation underneath its feet, the game’s modes don’t offer a lot of depth. The main career has you simply trying to out-drive and out-putt John Daly at course after course, and it’s not that compelling.

Unlike John Daly himself, this game is devoid of personality. That being said, the ProStroke controls have their advantages over Tiger in some cases (except using PlayStation Move doesn’t feel as good as in Tiger). With such a bare career mode I hope this game takes advantage of the fact that is has room to grow in future iterations.

7.5
About Game Informer's review system
Concept
Take note of some of the things that Tiger doesn’t do, and make that the basis for your game
Graphics
Pretty basic, and the player models are hilarious. You’ll also see the ball float a little bit on top of the greens
Sound
Daly provides voiceovers for tutorials and his challenge segments, but it gets old quick
Playability
The shot meter isn’t 100 percent accurate, but if there’s an upside to this, a good swing in the game requires a certain smoothness that you just can’t pinpoint with numbers on a meter
Entertainment
This game needs deeper modes to go along with its fun gameplay mechanics
Replay
Moderate