Joe Danger 2 welcomes you with a smile, sends you hurtling into stage after stage of craziness, and doesn’t let up until you put the controller down. It’s rollicking, silly, and challenging in equal measures, and never fails to up the ante with more and different things to do. The constant variety and frantic speed is commendable, but it loses some of the focus of its predecessor as a result. Stack on a preponderance of unforgiving timed chase sequences, and this sequel can sometimes frustrate even while it entertains.

You may recall Joe’s stunt-bike antics from his first outing, and more motorcycle fun is present in this follow-up. You also ride unicycles, skis, snowmobiles, ATVs, and jetpacks. Each of the dozens of levels has its own twist; if it’s not a new vehicle, then you’re using an established vehicle in a new way, like flinging newspapers at crooks while riding your bike.

Levels are filled with obstacles, hidden coins, jump pads, speed boosts, goofy enemies, and a diverse array of background items and sets. As you weave and leap between challenges, you also aim to complete objectives, from nailing a fast time to collecting all the hamburgers. Repeat playthroughs are enjoyable thanks to the numerous goals to complete. The many vehicles and backdrops are entertaining, but the constant change-ups can prevent you from getting comfortable with your vehicle. The campaign’s bigger stumble is an increased focus on chases, timed sequences, and long spaces between checkpoints. That race down the ski hill away from the broiling avalanche is fun the first time, but redoing the first half of the course on the 20th time is a pain. Fast reflexes and infinite patience are in higher demand this time around, and that’s not to the game’s benefit.

Thankfully, Hello Games offers so many cool extras that you can always take a break from a tough stage to try something else. A whole second campaign of “deleted scenes” offers up the wackiest and most difficult stages. A small-but-fun set of local four-player competitive tracks has friends punching and jockeying for the finish line. Ghost images and leaderboards let you compete against your online friends’ best scores. Perhaps most importantly, Joe Danger 2 includes a simple-to-use but highly flexible level editor to make your own tracks. These tracks can be shared online, and new tracks from around the world can be downloaded at the press of a button, dramatically expanding the game’s shelf life.

Hello Games has crafted another riotous game that fits comfortably between the racing and platforming genres, but this second installment leans closer towards the former. This might scare away some more casual players. If you love the quest for that perfect course run, and you don’t mind working for it, Joe Danger’s movie adventures won’t disappoint. 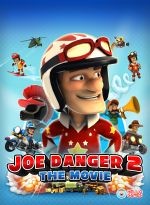 The world's greatest stuntman returns to 360, and he brings a garage full of new vehicles with him.

Purchase More Info
8.25
i
Game Informer's Review System
Concept Race and jump your way through a bevy of ­obstacle-laden ­courses
Graphics Bright and colorful, but sometimes the constant visual activity distracts from ­the ­action
Sound A few thematically-tied musical melodies enhance the movie homages. I could do without the shouting director
Playability Controls are tight and responsive. Different vehicles each have their own tricks to learn
Entertainment Varied and rambunctious, but less focused than ­its ­predecessor
Replay High