The fate of MGM’s James Bond series is in limbo, even after a pair of successful films starring Daniel Craig. While the studio’s financial troubles could mean a new film won’t be hitting theaters in the foreseeable future, Activision has come to the rescue. James Bond 007: Blood Stone delivers a solid dose of the agent, with the same exotic locations, over-the-top action sequences, and enough double-crosses to keep fans busy for a while.

Activision made a great choice in tapping Bizarre Creations for the all-new Bond adventure. The studio built its reputation on racing games like the Project Gotham series, but it also showed its potential in the shooter genre with the criminally overlooked The Club. Blood Stone divides its gameplay between on-foot action and vehicle-based sequences, and the shooting segments are surprisingly the stronger of the two styles. The vehicular sections are overly long, with slippery controls and spotty collision detection. You’d expect to have a few issues with tire grip on a Siberian ice floe, but the cars seem equally squirrely on the streets of Bangkok.

Bizarre took its cue from the latest incarnation of the character, which focuses on the brutality lurking just underneath Bond’s polished veneer. While he still looks good in a tuxedo, this Bond is just as happy snapping necks and hyperextending arms as he is sipping cocktails at a baccarat table. Thanks to his prowess as a melee fighter (and his quickly regenerating health), Bond can rush into firefights, disable a nearby enemy in hand-to-hand combat, and finish the encounter by popping off a few guards in the background with a silenced pistol.

I was tempted to lean on the melee attacks because the guns feel underpowered. That carries over to the multiplayer segments as well. In both modes, melee attacks earn players focus aim shots. In single-player, they’re essentially instant kills, slowing down time and lining up headshots at the press of a button. In multiplayer, time isn’t slowed for obvious reasons, but opponents are still lined up nicely.

As with any self-respecting Bond game, the action takes place in a variety of locations across the globe. Some, such as the Monaco casino from Casino Royale and a Burmese dam, are bound to inspire feelings of déjà vu, but the action is generally good enough to make it worth double-stamping your passport. The story was written by GoldenEye scribe Bruce Feirstein, and he’s packed some excellent setpiece moments into Blood Stone. One memorable chase takes place in Bangkok, with Bond pursuing an earth-mover through traffic as it knocks cars and highway structures asunder. And when Bond meets a contact in a crowded aquarium, wouldn’t you know that assassins are ready to crash the party?

The whole experience is packed with moments like this. Any game can have you systematically work your way through a villain’s fortified lair. Doing so while he taunts you over the installation’s loudspeakers is classic Bond.

Many gamers have fond memories of multiplayer matches starring James Bond, and Blood Stone ventures into that arena, too. Up to 16 players can compete as either MI6 agents or mercenaries across eight maps. Aside from team deathmatch and last man standing modes, multiplayer offers a pair of objective-based challenges. Each side either works through a series of three objectives (which culminate in satisfyingly large explosions) or do their best to prevent the other from completing the task. It’s a lot of fun, though it’s a showcase for just how powerful the melee attacks can be. The animations aren’t as intricate in multiplayer, but they’re just as effective. Unfortunately, they lack the satisfying crack of Halo’s melee attacks; even when I was victorious in the frequent melee battles, it felt as though I was swatting at air.

Players also earn ranks as they play multiplayer, unlocking new skins and weapons. One cool gimmick has the leading player from each team take on the skin of their side’s respective hero – James Bond or the evil mastermind Rak. It doesn’t grant any special abilities, but it’s a showy way to prove your worth.

Bizarre clearly set out to make Blood Stone feel like a part of Bond’s movie canon, and it’s certainly successful on that front. The weapons are anemic, and the driving sections can be dodgy, but it delivers a dose of spectacle and intrigue worthy of the character. 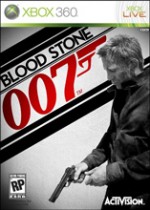 Bizarre clearly set out to make Blood Stone feel like a part of Bond’s movie canon, and it’s certainly successful on that front.

Purchase More Info
7.5
i
Game Informer's Review System
Concept Deliver an all-new James Bond adventure with familiar faces and the series’ signature action
Graphics They’re about as pretty as Oddjob, but they get the job done
Sound Fans of wah-wah trumpets and the James Bond theme are in for a treat
Playability A decent blend of action, though the driving sections could have been better
Entertainment It could be a while until the next Bond film hits theaters, and Blood Stone definitely scratches that itch. Add in a decent objective-based multiplayer mode and you’ve got at least a weekend’s worth of fun
Replay Moderately high