Despite an average score, I have a lot of good things to say about Islands of Wakfu. Ankama Games has attempted to bring an ambitious and surprising game together. A gorgeous art style draws upon French animation and comics to create a colorful, cute, and ultimately engaging fantasy world. The story weaves a deep and complex mythology, no doubt rooted in many of the ideas from the Dofus MMO, a game also set within this fictional world. Most notably, the gameplay attempts to combine the best traditions of Zelda exploration, old-school brawlers, and a tinge of RPG upgrading to come up with a style all its own.

It’s this last and all-important element, the gameplay, in which Islands of Wakfu loses its footing, especially if you plan to play the game by yourself. The combat system lets you change between a dragon and humanoid form. As a dragon, you spit out ranged attacks. As a human, you brawl with melee attacks while teleporting wildly about the screen. It’s a good idea, but everything feels slow and unwieldy in practice. Your character is stiff and unresponsive, and action quickly devolves into button mashing on easy fights, or tedious circle strafing on the harder engagements. Enemies have too much health, sometimes requiring dozens of repetitive hits to bring down. Outside of combat, I love the game’s richly illustrated world, but getting lost within its borders is too easy. Unclear objectives leave players wondering what to do next, and the omission of a map prevents the establishment of any sense of place. Puzzles often have arbitrary solutions, so it’s hard to feel any sense of accomplishment from them.

These problems are less of an obstacle when playing with a friend in local co-op. In this mode, each player controls one of the unique characters, though the health gauge is still shared. Where the game is damnably frustrating alone, it’s a good bit of fun with someone at your side. Combat feels more fair when the enemies have two simultaneous targets to focus on, and the actions involved in puzzle solving are sometimes easier to implement. While many of my complaints remain, the presence of a friend helps them fade into the background. As a team, the action moves faster, and it’s easier to enjoy the best elements of the game, namely its gorgeous characters and environments along with some surprising changes of pace as the game rolls out.

The game’s many small flaws combine to make certain sequences irksome, even while its unique vibe, mystical fiction, and strange world drive you to complete the game. The journey of these adorable little characters is memorable, even with frequent little frustrations. There’s a lot of variety to the activities and locations, and I give credit to Ankama for trying a lot of fresh ideas in one place. While I can’t recommend playing the game solo, I offer a hesitant thumbs-up to a pair of players looking for something unusual and off the beaten track. 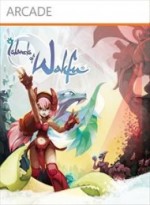 This gorgeous cooperative adventure mixes brawling, shooting, role-playing, and puzzle-solving, but doesn't do any of them as well as might be hoped.