Of Gods, Monsters, And Precious Loot
by Andrew Reiner on May 15, 2017 at 11:00 PM
Publisher: Warner Bros. Interactive
Developer: NetherRealm Studios
Release: May 16, 2017
Rating: Teen
Reviewed on: PlayStation 4
Also on: Xbox One The Caped Crusader and the billionaire. The last survivor of Krypton and the reporter. Most of DC Comics’ heroes lead double lives, all in an attempt to blend into society as seemingly ordinary people who don capes and masks when trouble arises. NetherRealm Studios’ 2013 fighting game Injustice: Gods Among Us also balanced duality, finding success as a fun fighting experience coupled with a popular story. Injustice 2 once again delivers knockout blows with its super-powered story and fighting, but finds a third way to entertain through an addictive collecting component.

Injustice 2 doesn’t reach the same level of narrative intrigue as its predecessor, but remains enjoyable for an entirely different reason. Although penned as a direct continuation to the original game and comic series, no moment is as shocking as Superman ripping out the Joker’s heart; the tone also isn't as dark. This sequel instead takes the more clichéd angle of uniting heroes and villains to stop an intergalactic threat. Brainiac, a space traveler intent on destroying Earth, can control anyone’s will, and has forged his own army of familiar faces. The lurking fear of Superman being freed from his prison is a nice plot thread that adds a layer of uncertainty to the arc, but almost every sequence boils down to “everyone fights everyone.”

NetherRealm delivers dumb fun in this story, which unfolds through lengthy sequences filled with epic fights, witty banter, and layer upon layer of fan service. The level of detail in the character models is impressive, as is the framing of the action – particularly in a sequence that pits The Flash against Reverse Flash. The story is as much fun to watch as the game is to play, maintaining a bombastic assault on the senses from start to finish. You won’t find much to think about in this narrative other than if Green Arrow’s dad jokes could be any worse, but that's part of its charm – this experience focuses on the powers of the heroes more than what's going on inside of their heads. The fighting is once again a ridiculous show of power. At any given second a hero could be punched through a pyramid, thrown into space, or mauled by Harley Quinn’s hyenas. This level of brutality is nothing new for Injustice, but the dancing that occurs between these catastrophic strikes is faster than before, and offers a higher level of strategy. The small touch of increasing the walking speed of each character goes a long way in removing the somewhat slow spacing game between opponents. Matches rarely have lulls, and players have more opportunities to turn the tables on their opponents thanks to the inclusion of aerial recoveries that allow you to pop out of juggle combos, and evasive rolls that can give you distance or close the gap quickly.

Special meter management also offers new dynamics, and no longer hangs so heavily on banking segments for a potential Clash or super move in the final round. The new evasive moves deplete segments of the meter, as do various meter burn moves. Each arena is still filled with environmental interactions and arena transitions, but players can now block most of the trash cans, computer terminals, and strange things that are thrown their way.

The game feels tighter as a whole, and many of the returning characters feel new again, for better or worse. I enjoy Batman’s techniques more in this sequel, but find Superman to be strange in both appearance and functionality. The roster, while lacking some heavy hitters for narrative reasons, offers a nice variety that pulls equally from DC’s gods and titans as the vigilantes, such as the Bat family and Suicide Squad. Supergirl, Gorilla Grodd, and the always-quirky Doctor Fate are excellent additions to the roster, although no new character shakes up the foundation in dramatic ways. As elaborate as some of the finishing moves are, many struggle to feel epic outside of their length. For every amazing finisher, like Swamp Thing pulling an opponent underground for a thwacking of roots, a character like Bane does little more than suplex an opponent.

Exploring Injustice 2’s deep well of strategies is one reason to keep playing, but I think most players (like myself) will also feel the pull tied to loot. Winning a match feels great no matter what, but the game amplifies that sensation with a showering of rewards, ranging from two different forms of experience points (for the player profile and the character you used in that battle), and the chance of getting gear (custom equipment that can change characters’ looks and attributes). You may also earn a performance reward called Mother Box, which is Injustice 2’s form of a blind box holding gear for any given character.

The gear won’t excite in the opening hours, most of it doing little more than giving your character a slightly different look along the lines of different pointy ears on Batman or an emblem-free cape for Supergirl. Opening a box to find new legs for Captain Cold, arms for Wonder Woman, and a head for Aquaman is a bit strange until you dive deeper into what they offer. Extensive play leads to more exotic loot that can dramatically change the look of your character, such as Hal Jordan’s Green Lantern looking almost exactly like Kyle Rayner’s Ion.

The high-end gear also produces significant performance bumps such as strength increasing by +200 or ability by +150. In addition to gear, you can earn new abilities, two of which can be equipped at any given time. The benefits are different for each item, but should you receive something you don’t need, you can sell it to earn currency for more Mother Boxes. If you like a particular item and want to keep it, yet its level is significantly lower than your character's, you can use a Regen Token (another form of currency) to raise the item's level to match your character. As cool as this is, there's a risk to it. I raised a Batman head from level 10 to 12, which gave it +38 strength and +30 defense, but the ability fell by 44, something I didn't want to sacrifice. Thankfully, you can keep the original version and pass on the new one.

The bonuses tied to gear don’t enhance your characters for ranked matches (outside of appearance), but do come into play in most other online avenues, as well as a new mode called The Multiverse, which replaces S.T.A.R. Labs from Gods Among Us. Playing off of the idea that DC’s universe has an infinite number of earths, your heroes face off against alternate versions of themselves, some stronger, and others with unforeseeable powers. Multiverse is a beautifully designed avenue of play featuring daily, weekly, and monthly challenges, each testing your skills in different ways, all in the hope of unlocking more loot. Multiverse matches sometimes play with the fighting mechanics. In one tournament, I couldn’t jump. In another, the sun was fading out, which turned the screen pitch black for a split second or two. The events are always changing, but I haven’t seen anything as zany as S.T.A.R. Labs’ goofy side content such as controlling Catwoman’s kitten, Isis. Multiverse is the mode where you can sink the most time, although story mode offers branching paths that demand multiple playthroughs to see everything.

Cooperative play isn't offered, but players can team up in a guild to earn guild-specific experience points and, you guessed it, unique loot. The ominous option to spend real money on Source Crystals (yet another form of currency) is in Injustice 2, but its pull isn’t that strong at launch, as it is tied only to color shaders, but will be used in the future for premiere skins, which is likely where some of the movie and comic tie-in content will reside.

Injustice 2 is a huge game, offering a lengthy story-based campaign, a great fighting experience, and a nearly endless supply of notable loot. The small tweaks to combat go a long way in creating a more dynamic flow, which resonates well in multiplayer matches. I ran into a little lag in a few online bouts, but the game ran smoothly most of the time. Even if you don’t enjoy the competitive aspects of the fighting genre, this is a game you can dive into for an enjoyable superhero story. Brainiac is a tough fight, but anyone should be able to march to him and take him down on the easiest difficulty.

With DC’s cinematic universe pumping out one bad movie after another, Injustice 2 is the best way to see just how powerful and diverse its heroes are. 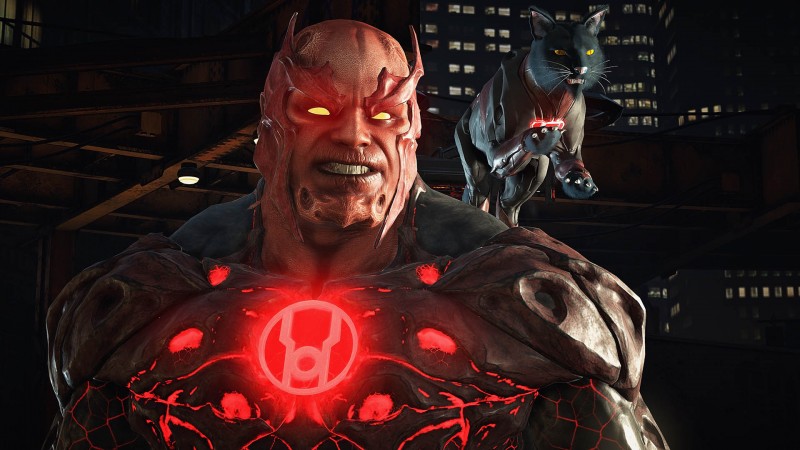 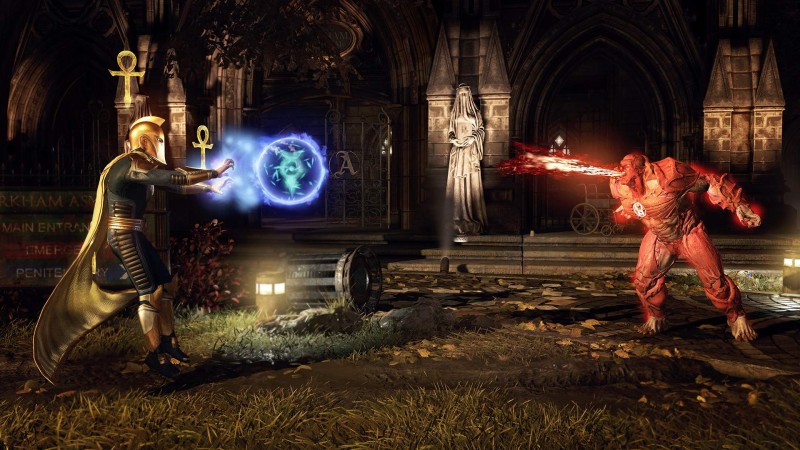 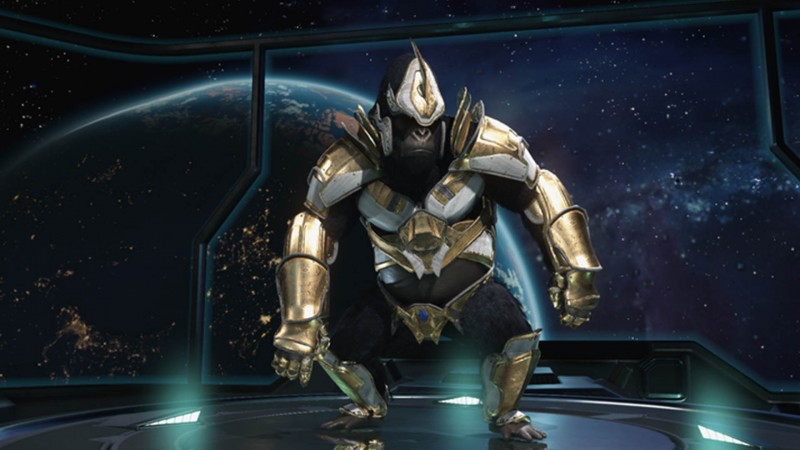 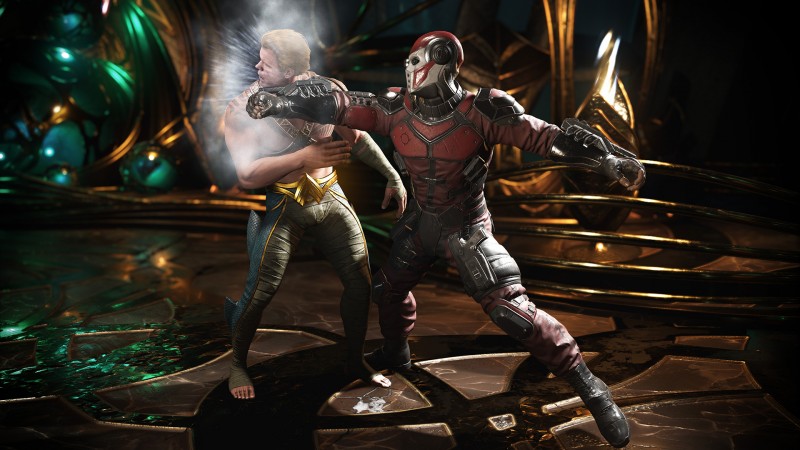 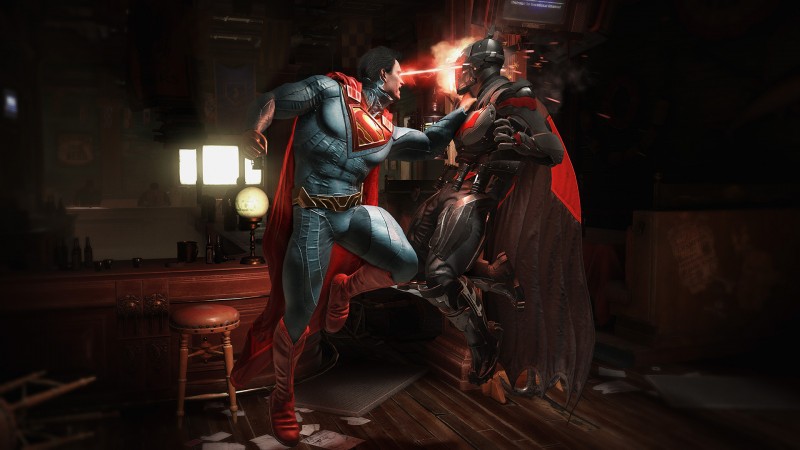 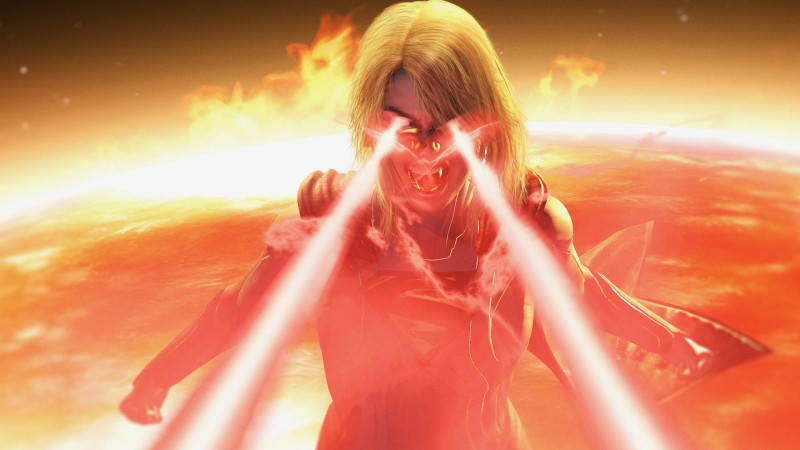 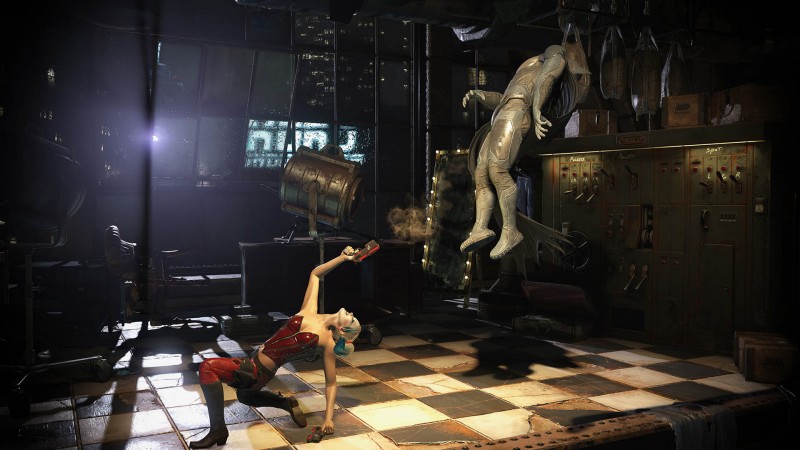 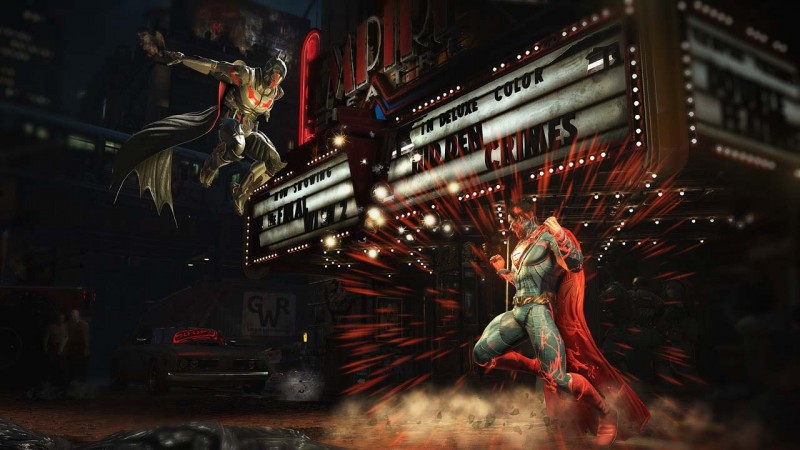 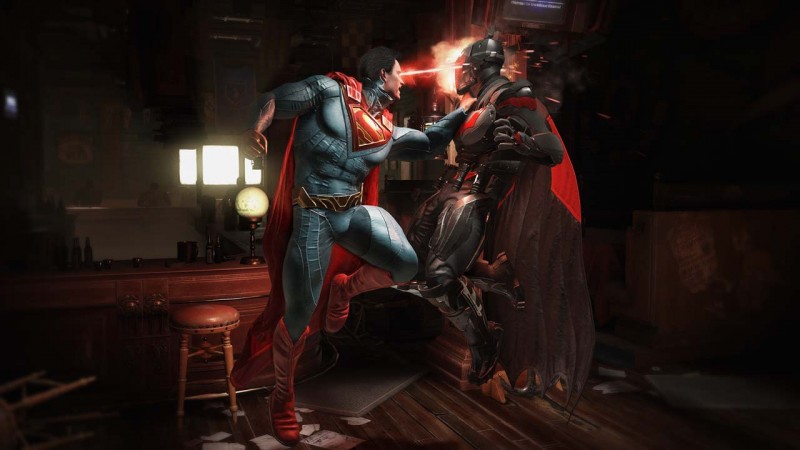 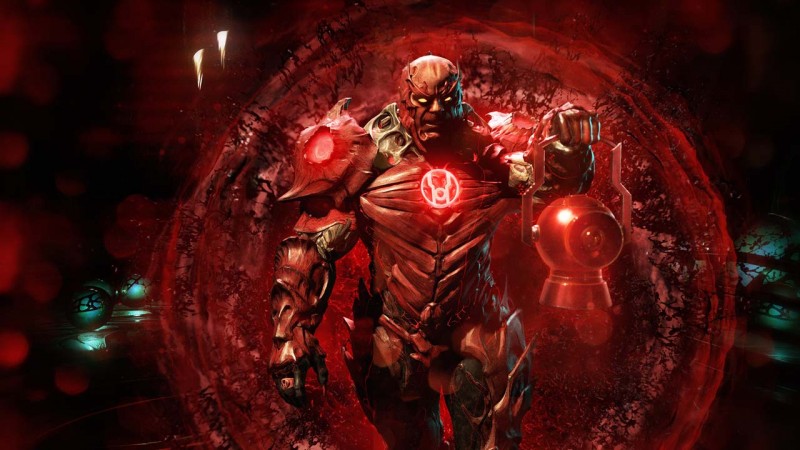 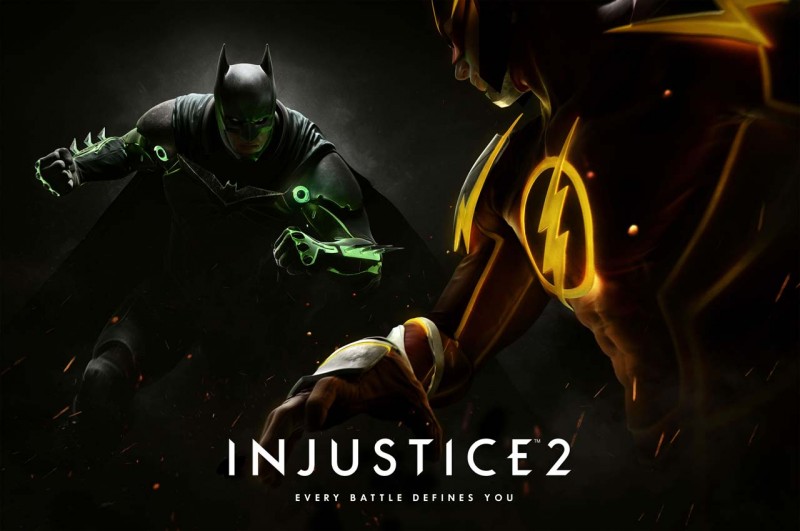 A thunderous sequel that excels in fighting, story, and loot collecting.

Purchase More Info
9
i
Game Informer's Review System
Concept A sequel that offers enhanced combat, a silly (but action-packed) story, and collectible loot galore
Graphics Few details are spared as the titans clash and the world is destroyed around them, even in the little things like lip-syncing. The only real oddity: What’s up with Superman’s new costume?
Sound The amount of character chatter for matches is mighty impressive. You even hear characters comment on confronting themselves, or have a special saying or two for their arch nemeses
Playability Little enhancements to speed and evasive maneuvers create a more fluid and dynamic combat experience
Entertainment A deep game that hits hard in three key areas: fighting, story, and collecting
Replay High