In 2010, Chair Entertainment released a new take on Punch-Out-style combat that showed off the graphical power of iOS devices and used controls expertly tuned to touch screens. When some complained about the brief completion time and repetitive nature, the developer bounced back in the sequel with a much larger castle to explore, new combat styles, and deeper customization. For the final entry in the series, Chair has done it again, offering a long list of satisfying improvements.

The most notable jump this time around is the addition of a second playable character. Siris’ pal from the second game, Isa, is now a Deathless (meaning she can be killed and still come back for more). She stealthily creeps around fires off crossbow shots into unknowing enemies before every fight. Isa’s weapons fall into the same light, heavy, and dual wield categories as Siris’, but they’re different classes. Rather than having a two-handed axe, for example, her heavy weapon is a spear. Her acrobatic battle style incorporates flurries of flying kicks and spinning neck snaps and is a welcome alternative to Siris’ straightforward warrior slashes. Though, in the end, you’re still just swiping and tapping the screen all the same.

Isa has her own distinct armor, rings, and weapons (over 135 unique items for each character), but both share a bank account. Players are forced to use both characters equally via the back-and-forth level structure, so it takes some satisfying number crunching and resource management to make sure they’re both well equipped. Skill upgrades are now included in the classic stat boost system and encouraged me not to overload attack and health categories as usual. With enough points invested in certain categories you can upgrade not only the current character, but universal mechanics as well. Rewards include more gold and experience when winning fights, discounts and more rare items in the shop, faster gem fusion time, and even the ability to resurrect if you fall in battle. In pursuing these bonuses I felt like I used more magic and shields than in past games, and enjoyed a more well-rounded experience.

The new base of operations allows players to fuse gems, make potions, upgrade weapons and armor, and choose the next mission on the world map. Instead of returning again and again to a single labyrinthine castle like before, players visit all manner of finely realized locations like desert ruins, fancy palaces, and futuristic techno forts. I prefer these bite-sized and varied stages, but I hope that future updates will allow for more alternate paths as they tend to be very linear.

In-app purchases return, but they’re just as avoidable as they have been in past games. Chair has added in battle chips as a separate form of currency from the standard cash. These are the only thing that can buy potions, keys, and maps, while money is only for armor, weapons, and gems. At first I was disappointed at the currency split, but it eventually makes more sense. Chips are much more rare, they can only be earned by completing goals (think achievements) and by winning random battle challenges (e.g. defeat an enemy without blocking). When you do finally get some, it’s a bigger deal and you’re forced to be much smarter with how you use them.

The story has always impressed me in the Infinity Blade series and I was hoping for a big finish. The previous games all had a twist to them that subverted expectations. Here the most interesting moment happens in the prologue. The rest is just a basic “let’s track this guy down and get him” structure. Attempts at more character development between stages don’t quite get there, partially due to lower quality out-of-suit character models for Siris and Isa. The facial models aren’t up to the high graphical bar set by the rest of the game and their dorky future-sweaters are the polar opposite of the fantastic armor designs.

Despite these disappointments, I still enjoyed my wildly addicted time with the game, constantly tweaking my gear to gain every advantage. Even after the review I still find myself lured back for that second time through the campaign searching for gold and rare loot.

Online Play
Though it’s built into the game, the new ClashMob system was not ready on launch day. First introduced in Infinity Blade II, this system invites all players to unite for common goals against a constant stream of powerful enemies. This time around, solo trials are incorporated as well so you can win rewards without relying on others. New Aegis Tournaments offer a competitive element, pitting players against each others’ high scores. We’ll have impressions on these elements once they’re up and running. 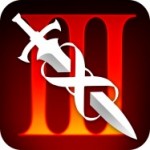 For the final entry in the series, Chair has done it again, offering a long list of satisfying improvements.

8.75
i
Game Informer's Review System
Concept Expand and improve every element of the Infinity Blade formula
Graphics Infinity Blade’s visuals have always ranked at the top of mobile gaming space and this cranks the quality up even further
Sound A cinematic score, solid voice acting, and clashing battle noises all impress
Playability The classic control scheme is as tight as ever, with new options granted by the additional character, Isa
Entertainment I reveled in the dramatically larger and more varied world and expansive loot, combat, and customization options
Replay High