Infinite Air piggybacks on the world-building of the Golf Club, but unlike that title, Infinite Air's gameplay core isn't strong enough to anchor the trappings around it. Populating a mountain with rails and jumps and creating competitions for others as they have for you is a tantalizing playground, but one that can't rise above the surrounding mediocrity.

Predictability is hard to come by in Infinite Air's trick system – an ignominious position for such a major gameplay component. Spin is generated by pre-loading your rider before launch, and the amount of spin you get decays the longer you hold down the triggers (for left or right spin, respectively). But this isn't the tricky part, as you can become accustomed to this (and pulling off tricks in general) after several hours of play. Stopping your rotation, however, is another matter altogether. Some previous trick-based games like Tony Hawk or Skate are built around specific inputs producing specific tricks. The fact that Infinite Air is physics-based and eschews the Tony Hawk-type direct approach means there is no way to predict when you're going to stop rotating once you start. This isn't a big problem when you're spinning in the normal horizontal plane, but if you try and perform tricks containing end-over-end flips or rolls, you have no way of judging whether you'll land on your feet or not.

This isn't the only frustration with the trick system. Initiating the rolls and flips themselves is inconsistent, rails feel floaty and can be hard to engage, and there are times when even ollie-ing doesn't happen when prompted. The fact that there are multiple ways to spin, flip, roll, and ollie isn't bad in and of itself, but it doesn't help users get comfortable with the controls, either. Also, when you get a face full of snow after messing up a trick –which happens quite a bit – the rag doll physics often glitch out or the respawn puts you in a bad spot.

Creating your own mountain – from landscaping the terrain to placing a variety of objects – is a less-frustrating affair than the trick system. It even includes the cool snap tool, which lets you link rails together into a single span, for example, as well as combine dissimilar objects. However, while there are some killer runs to make yourself or test out from another user, there's no larger framework in place to provide an encouraging meta-experience around creating runs or trying them out. The landscape is dotted with user-created contests (and making your own is easy, especially with a handy rewind button and other controls), but beating one doesn't even unlock more boards or gear like the career-like circuit mode.

Infinite Air offers a lot to like on a conceptual level, but its faulty trick system creates a hole that is impossible to fill.

This review pertains to the PS4 version of Infinite Air. The game is also available on Xbox One and PC. 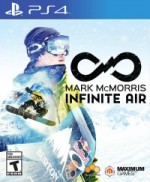 There is a lot to like about Infinite Air on a conceptual level, but its faulty trick system creates a hole that is impossible to fill.

Purchase More Info
5.5
i
Game Informer's Review System
Concept Let players create mountains of snow and carve them up
Graphics There are some framerate stutters, but this front is more or less stable
Sound Thankfully, you can turn down the audio for your chopper buddy who comments on your performance
Playability The trick system takes a while to get used to, and even after that it’s unsatisfying
Entertainment Sure you can go anywhere among these virtual mountains, but it’s the “do anything” part that trips the game up
Replay Moderately High