When we first meet Abigail “Fetch” Walker in Infamous Second Son, she appears to be a psycho stalker obsessed with a man named Brent. She built an elaborate shrine honoring him, complete with his name written dozens of times on the walls and photographs of him on a candlelit alter. When Delsin Rowe confronts Fetch, we learn that her connection to Brent is much darker and more heartfelt than that of a crazed voyeur.

Fetch is quickly established as an interesting and conflicted character – a dark and edgy foil to Delsin’s high-energy, joke-filled approach. Infamous First Light places her in the starring role – not for a sequel, but the unabridged telling of her origin story. Although most of the big moments tied to Fetch’s first days in Seattle are already revealed in Second Son, they are given context in this new adventure. We get to see how Fetch and Brent’s story unfolds, and also spend a fair amount of time watching the Department of Unified Protection train Fetch to become an assassin.

Fetch’s story hits many of the same emotional notes as Delsin’s coming-of-age story; it feels too familiar at times, but ends up being an enjoyable journey that expands the scope of the Infamous universe. Fetch’s interactions with Brooke Augustine, the head of the DUP, give us a fascinating look at the corrupting forces in this world. The final moments of First Light, which take place in a new snowy area, are as artistic as they are powerful, pulling Fetch through her early years to a defining moment in her life.

Although there are no moral choices to make in First Light, Fetch’s emotions drive her in both directions. Her Neon power is usually the dictating force behind these decisions. She’s a master of this power, and has a noticeably better handle of it than Delsin. Tapping into Neon allows her to scurry up buildings, streak great distances in the air, fire off electrical rocket barrages, and best of all, create a magnetic neon storm that sucks up enemies, detonates, and showers the terrain with debris and bodies.

Fetch can also use environment-based neon gas clouds to boost her speed. The blast of velocity mostly comes in handy in secondary activities, like collecting hard-to-reach Lumen (the game's version of Blast Shards), and racing minigames, in which Fetch must track down Lumen on the move.

While there are fewer side activities in First Light, most of them are better than the selection Delsin was offered. The act of tracking down hidden drones is handled significantly better, as they are now well hidden and Fetch must hack into a drone’s camera feed to identify what they are seeing and where she is in relation to it. The races, as short as they are, are a thrilling and welcome diversion.

Fetch is positively lethal in combat encounters, almost to the point of her feeling overpowered. Perhaps this has to do with me diligently scouring the environment to collect Lumen and upgrade her powers early in the adventure, but none of the battles present a great challenge. Most of her conflicts are against Russians, who can be downed with one hit using her focus-based sniping, and weaker DUP troops. Helicopters and DUP conduits are thrown into the mix toward the conclusion, but again, their collective force is rarely a threat.

Does this hurt the game at all? A little. Most of the missions are filled with variety. I especially like the escort missions, where Fetch rides on the roof of a truck and unloads neon at cars approaching from all vectors. The lack of challenge didn’t really cross my mind until the game came to an end and I jumped into the optional battle arenas.

If you like scoring competitions, the battle arenas are a blast, pushing you to move quickly, chain together combos, and use your Karmic blasts at the right times. Each of the three different arenas delivers waves of enemies in spacious Curdun Cay-based environments. Keeping a combo going is satisfying, and reminiscent of the underappreciated Bizarre Creations game, The Club. The chaos that erupts in the final waves shows Infamous firing on all cylinders and unloading everything on the player at once. If you have Infamous Second Son (which is not required to play First Light), you can bring Delsin and his entire arsenal of moves into the combat arenas. His and Fetch’s scores are listed separately. The one drawback to the arenas: They are lenghty, and are not conducive to “pass-the-controller” gaming sessions with friends.

Infamous First Light lacks some of the punch of Second Son in its campaign battles and familiar narrative marks, but is still a welcome addition to the series. Fetch is a fantastically written character, and the conclusion to her origin story is worth seeing in its entirety – even if you already know what happens. Sucker Punch did a phenomenal job with the finale.

Infamous First Light is a standalone digital download retailing for $14.99. You do not need Infamous Second Son to play it. 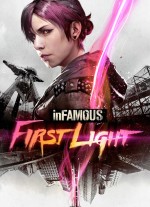 Fetch steps into the starring role in this standalone prequel.

Purchase More Info
8
i
Game Informer's Review System
Concept Fetch steps out of the sidekick role to star in this standalone digital download
Graphics tunning way
Sound Fetch’s dialogue is well written, establishing her as a mature and grounded character – almost the exact opposite of Delsin’s parade of one-liners. The score and additional voice acting are equally as good
Playability Fetch doesn’t have the elaborate arsenal of Delsin, but her mastery of the Neon power is fun to experience. The optional scoring-based battle arenas deliver a good level of combat intensity; this is Infamous at its most amped-up state
Entertainment Fetch’s origin story hits on several of the same notes as Delsin’s tale – making it somewhat predictable – but the action is always great, and the final 20 minutes of this journey are exceptional
Replay Moderate