Launching with a Hot Shots title is a rite of passage for any new Sony platform. Because of this, I can always count on at least one title at launch that doesn’t disappoint. Be that as it may, the Hot Shots franchise’s role as a launch stalwart seems to be in a stasis; its Sisyphean duty to support a new console forever keeps it from being anything greater than that.

More likely, the Hot Shots franchise is stuck in a rut because it has already dialed in its gameplay and engaging career formula with its fans. World Invitational is more of the same, notwithstanding the new Vita features and some solid online features such as a friends’ leaderboard and a promise from Sony of downloadable courses, costumes, and characters.

As with other Hot Shots games, I was easily seduced into its myriad unlockables, loyalty system with its golfers (where different shots are available the more you play with a particular golfer), and tight gameplay. I love getting into a groove with the classic three-click swing mechanic and trying to hit the correct beats in order to pull off super backspin shots and flag-rattling Rising Balls. I equally enjoy the different course perimeters (also included in online tourneys) that sometimes pop up, like extra penalties for hitting into the rough, no spin rules, or shot timers.

The Vita-specific features are nice, but are peripheral to the core gameplay experience. Using the AR and motion capabilities to look around the virtual golf course (while moving the Vita itself) is nifty, as is tracing on the back touchscreen to plot out various ball trajectories, but they don’t add enough to the game to elevate this version of Hot Shots above the others. You can also nudge the Vita at impact for a super power shot.

Being predictably solid is both a blessing and curse for the Hot Shots series, and at the end of the day I try to not overthink the fact that World Invitational is simply a fun experience. I approach it a lot like my real-life golf game, where I just try to enjoy being out in the sunshine and not get too wound up at the numbers on the score card. 7.5
About Game Informer's review system
Concept
Add Vita functionality to the usual Hot Shots golf formula
Graphics
The game looks cutely sharp as always
Sound
The caddy accents always raise an eyebrow with me, if you know what I mean
Playability
Alternate swing modes and the new Vita features add something for long-time vets to experience
Entertainment
The Hot Shots series is always fun, but having said that, there’s not a lot that differentiates this title from the others
Replay
Moderately High 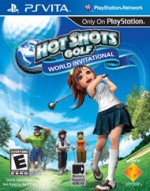