Horizon Zero Dawn is already one of the best games of 2017 thanks to a gorgeous open world, pitch-perfect combat (against robot dinosaurs!), and an enticing mystery. Even though Horizon's ending answered all the questions surrounding Aloy's past, players still want more of the intriguing post-apocalyptic world she inhabits – and Guerrilla is all too happy to oblige. Just in time for winter, The Frozen Wilds adds a large snowy region, along with new secrets to uncover and mechanical beasts to slay. While not a massive or vital expansion, The Frozen Wilds provides a welcome reason to delve back into the hunt.

The Frozen Wilds seamlessly slots into Aloy's journey, opening up a sizable new region in the northeast corner of the map. This area is home to the Banuk, the isolated and nomadic tribe that strikes a balance between hunting the world's robotic animals (like everyone else in the game) and revering them. The Banuk didn't get a lot of screen time in the base game, and The Frozen Wilds shines a spotlight on what turns out to be the most interesting faction in the series.

Upon entering the region, Aloy is immediately ensnared in the Banuk's plight; new breeds of stronger machines are emanating from an ominous mountain known as Thunder's Drum, and the tribe's attempt to take it back has ended in heavy losses. Aloy takes it upon herself to find out what's happening inside the mountain (the Banuk don't care much for help from outsiders), a quest that also promises more information on her shady business partner, Sylens. While it has some loose ties to the main narrative, The Frozen Wilds mostly contains its own mysteries and lore. The core story missions aren't particularly long (you embark on about a half-dozen missions), but they take you on a well-paced narrative, and new acquaintances like the tribal chieftain Aratak and the machine-communing shaman Ourea defy common character tropes. Aloy's allies are also better integrated into the gameplay, accompanying her on several missions and evolving with the story. The Frozen Wilds' side missions and errands are also worth undertaking, and offer better rewards than in the main game. By helping various Banuk tribe members, you can attain new outfits and weapons, including the flamethrower-like forgefire and electricity-spewing stormslinger. A separate side-quest chain allows you to upgrade these new weapons into formidable tools of destruction; the forgefire in particular can quickly melt through the HP bars of enemies if you're brave enough to stand toe-to-toe with them, and an alternate attack allows you to lob fireballs from a distance. You're still limited to four slots on your weapon wheel, but I happily made room for the new arsenal, even if arrows are still your main attack method. Even without the rewards, I was once again compelled to track down and read all the new collectible data files that The Frozen Wilds adds, a testament to Guerrilla's expertise in world-building.

Guerrilla also succeeds in creating a visually stunning locale to explore. What The Frozen Wilds lacks in environmental variety (I hope you like snow) it makes up for in focus. You can practically feel the chill of the inhospitable snowscapes Aloy explores, which reverberates in the Banuk's culture and their struggle for survival. You can also discover a few more geographic landmarks which root Horizon in the real world, another fun aspect that drove exploration in the main game. Unfortunately, you mostly face familiar foes in The Frozen Wilds' new environment. The expansion only introduces two new mechanical beasts: the canine-like scorcher and the bearlike frostclaw (plus a fireclaw variant). A new enemy-buffing tower is also added to the mix, along with tougher "daemonic" versions of the main creatures. The scorcher and frostclaw are formidable additions to the food chain, and offer some great, end-game-worthy showdowns during The Frozen Wilds' story missions. In contrast, the other battles in Horizon's new region feel like more of the same.

The new skill tree is also disappointing. Most of the new abilities are focused on allied machines, which were underused in the main game. However, boring abilities like scavenging supplies while riding a mount and three(!) skills devoted to machine repair aren't going to change that. A few other skills offer quality-of-life upgrades like more inventory space or the ability to break down mods and resources for cash, but they are all largely inconsequential.

Ultimately, The Frozen Wilds is a welcome addition to Horizon. The mysteries residing in Thunder's Drum may not reach the same heights as the main game, but they are a great reminder of how wonderful and compelling Horizon is. The Frozen Wilds doesn't reinvent Guerrilla's new hit game, but I'll gladly accept the excuse to jump back into Aloy's world. 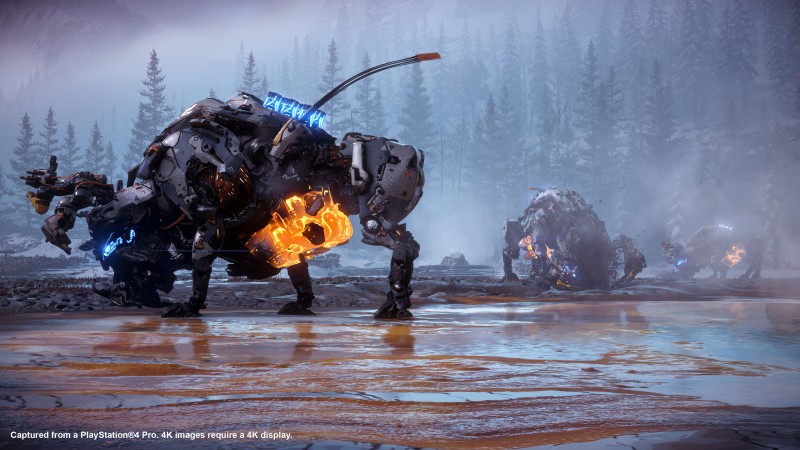 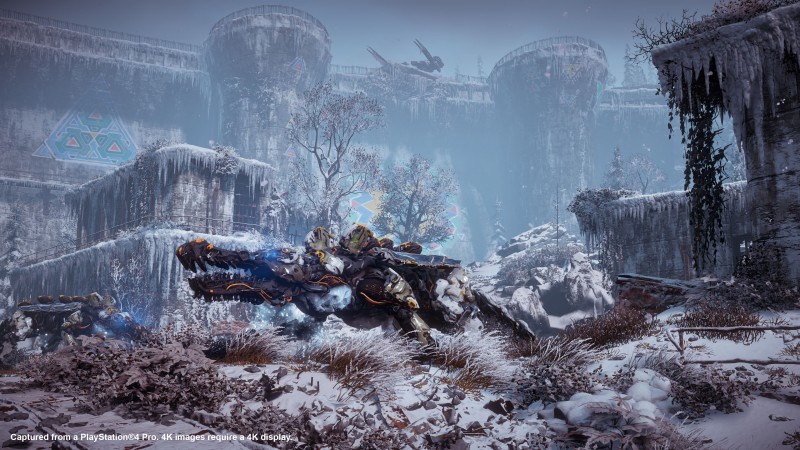 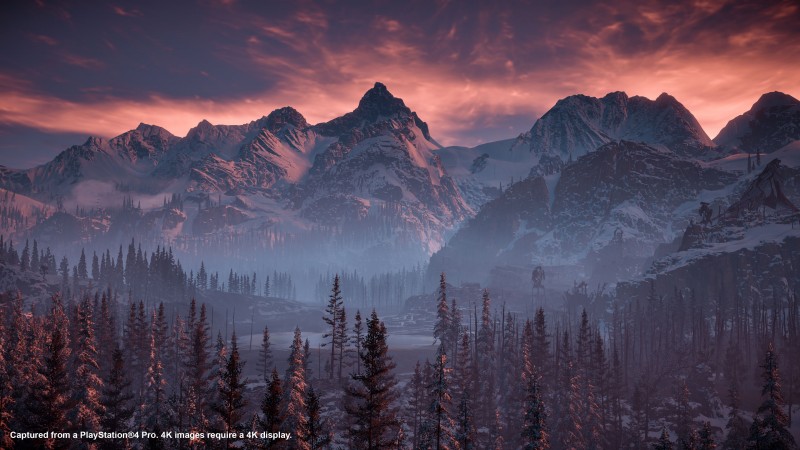 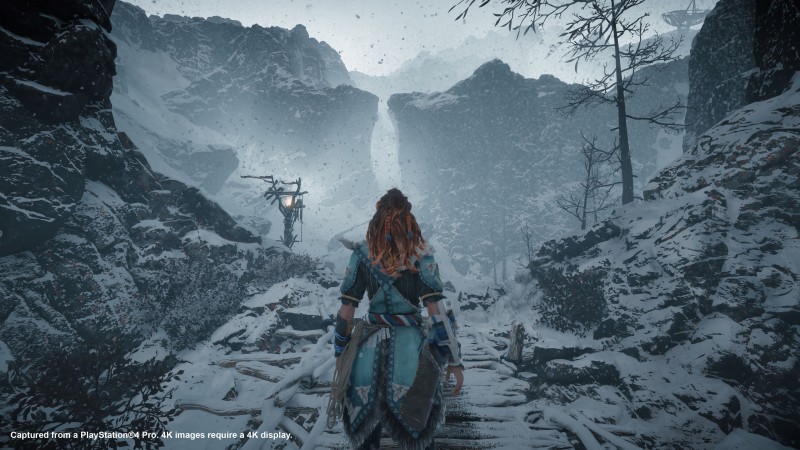 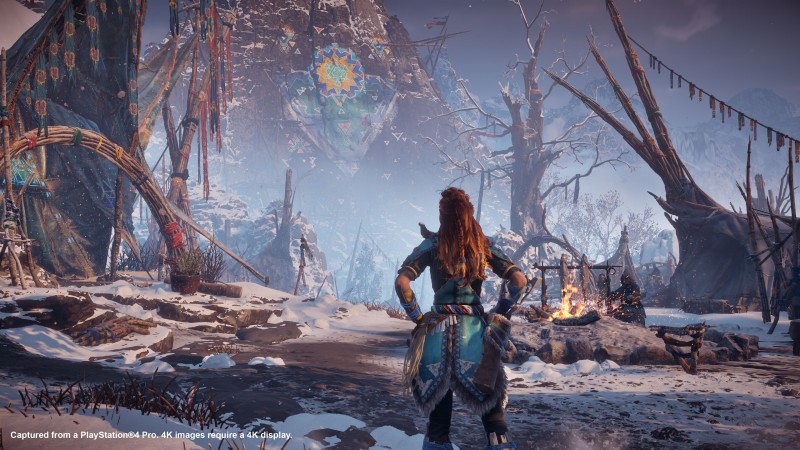 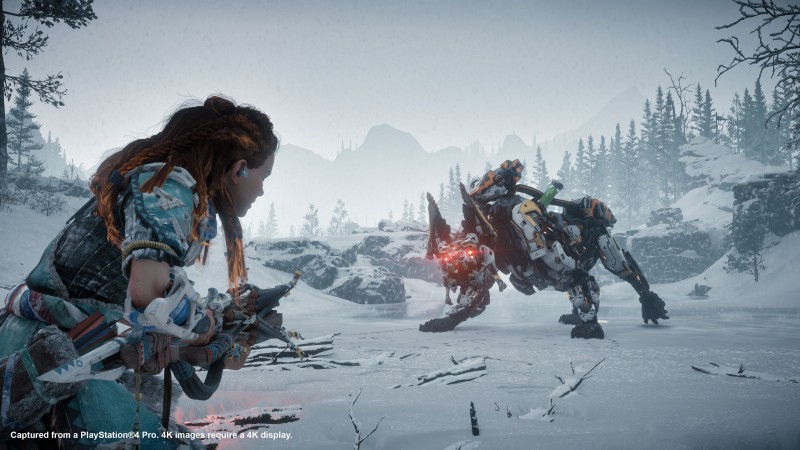 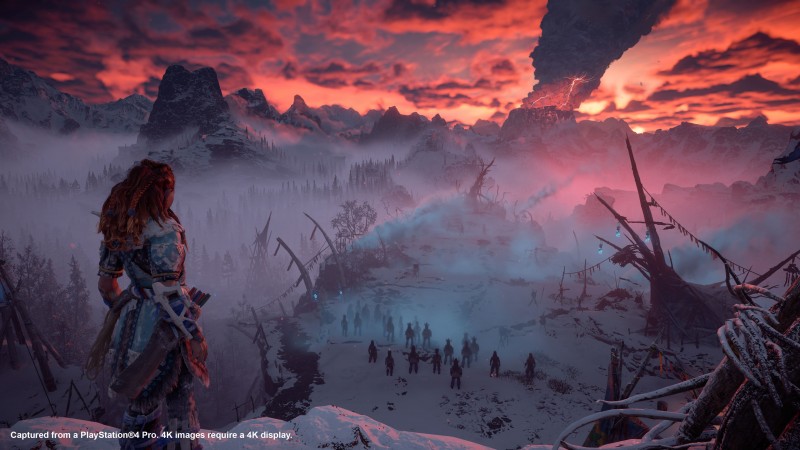 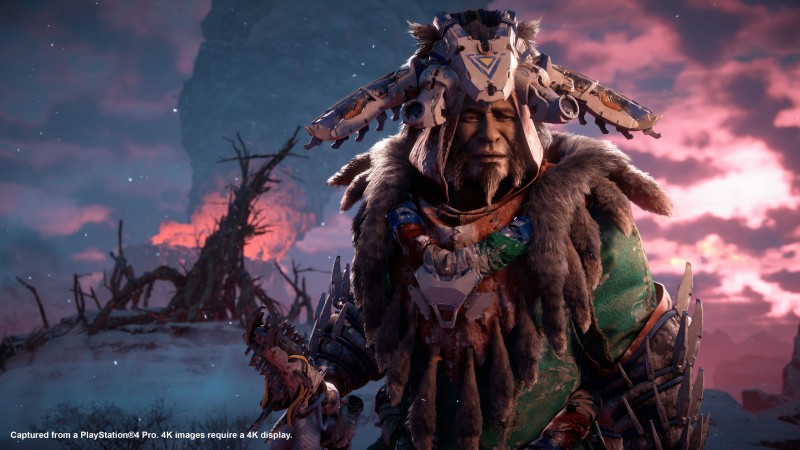 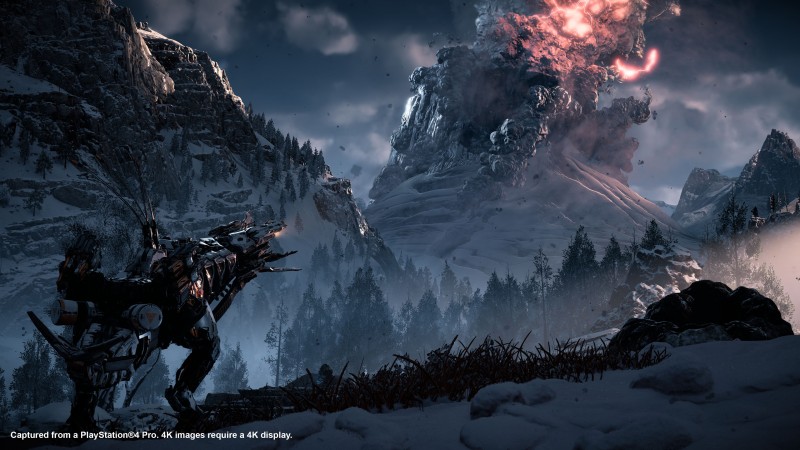 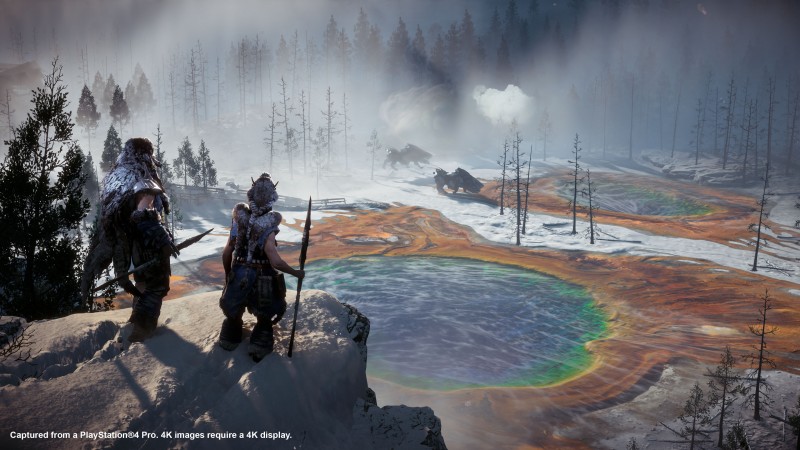 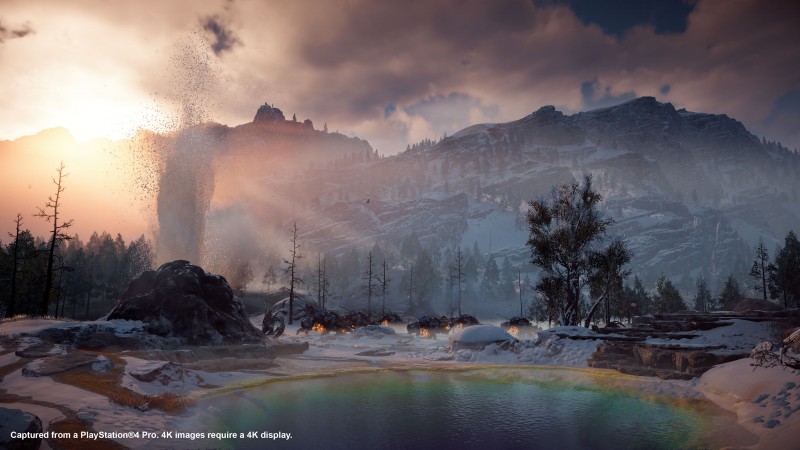 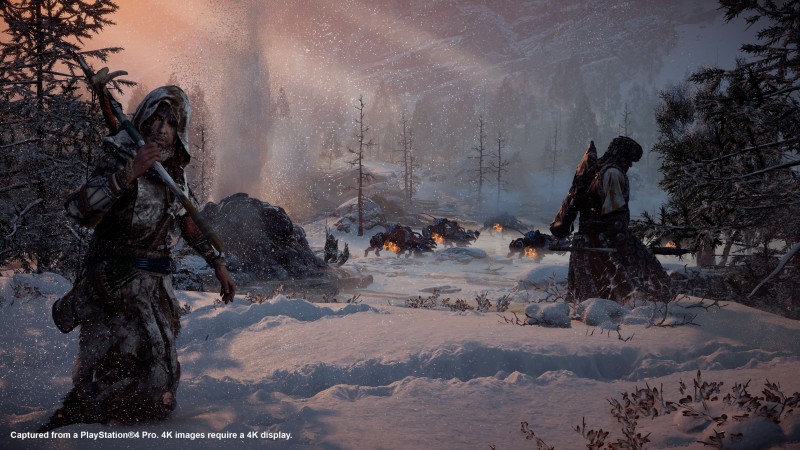 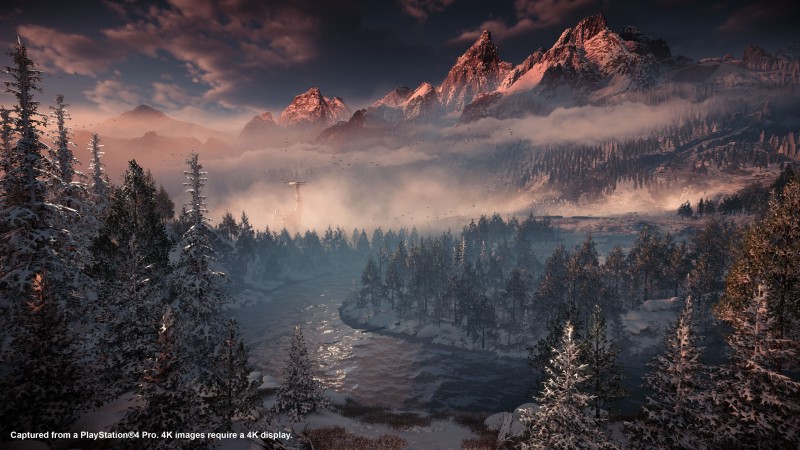 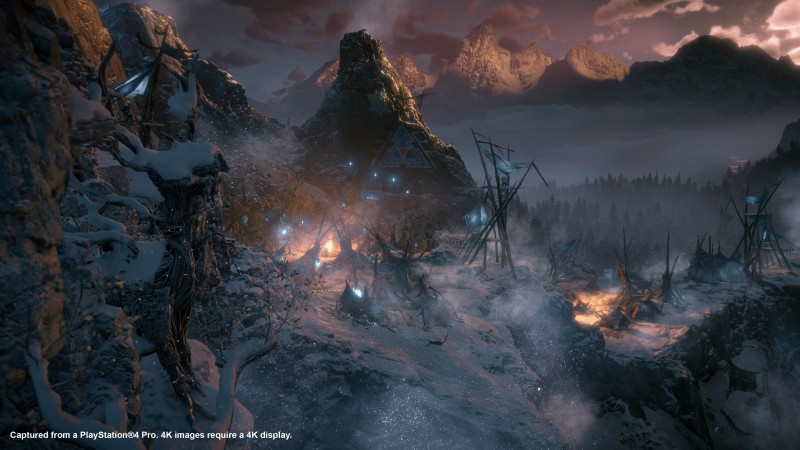 8
About Game Informer's review system
Concept
Explore a frosty new region of Horizon’s intriguing world and chase down a few new mysteries
Graphics
Horizon Zero Dawn was of the most visually stunning games on PlayStation 4 and that hasn’t changed
Sound
The new voice actors do a good job bringing their characters to life, as does Ashly Burch, reprising her role as Aloy
Playability
Combat is as satisfying as ever, especially against the new enemy types
Entertainment
The Frozen Wilds offers a new and condensed mystery that hits most of the same notes players loved about the main game
Replay
Moderate 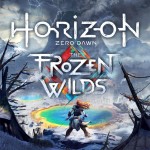