Burdened by a record deficit, shrinking middle class, aging infrastructure, overstretched military, and an increasingly hostile political climate, some might say the United States of America has seen better days. Extrapolating these events alongside a highly implausible reunion between North and South Korea, THQ and Hollywood screenwriter John Milius have concocted an alternate universe Red Dawn that replaces the Soviets with the Korean People’s Army.

Homefront joins our imperiled nation in 2027, two years after a Korean EMP blast renders America helpless and opens the borders to invasion. The battle scars stretch across the nation. As protagonist Richard Jacobs is detained by KPA troops and forced onto a bus in Montrose, Colorado, you watch helplessly as the bus rolls past internment camps, impromptu executions, and ditches filled with everyday Americans. When a truck smashes into the bus and resistance fighters free Jacobs, I gladly joined the fight to liberate our sacred White Castles and Hooters restaurants (both of which are littered across the Midwest town).

The setup immediately sucks you in, but once you join the ranks of the resistance, the emotional scenes that raise Homefront above your typical point-and-shoot affair become increasingly scarce. Kaos Studios smartly implements Half-Life 2 style calm-before-the-storm moments by giving you downtime in the resistance camp to get to know the ragtag group of patriots, but your options here are limited and I never developed an attachment to my comrades. It’s tough to warm up to people when they constantly get in your way on the battlefield and bicker nonstop about the feasibility of the plan in action.

Once the bullets start flying, Homefront fails to distinguish itself from the myriad shooters making camp in Call of Duty’s wake. Everything on the standard FPS checklist is here – sniper battles, turret set pieces, a chopper sequence, and even the 2027 equivalent to the AC-130 mission in Call of Duty 4. While placing these segments in a shooter isn’t a bad decision, Homefront brings nothing new to the table outside of a remote-controlled drone. Rather than give you the keys to this destructive trump card, you’re limited to selecting its next targets and watching the fireworks from afar.

The controls are competent enough to get you through the battles, but the lack of polish and craftsmanship is evident throughout the five-hour campaign. It’s easy to get hung up on objects in the environment, the “follow-me” NPCs guiding you from objective to objective move at a snail’s pace, and the graphics are hardly cutting edge. From low-resolution textures to the static, pixelated skies, Homefront looks like it was built during the transition to the current generation of consoles. Despite its underperforming graphics, the game still suffers from the occasional framerate dip and animation hitch.

Thanks to some well-crafted maps and a unique in-game economy, the multiplayer fares better than the campaign. Rather than give each team a set number of vehicles at the start of the match, Homefront rewards you with Battle Points for each kill, assist, or flag capture. Players can then use these points in-match to purchase cheap perks like flak jackets at any time during the match, or save them to unlock the more expensive, tide-turning toys like armored vehicles, drones, and air strikes.

The multiplayer is also easier to approach for less-skilled players thanks to the clever Battle Commander mode. This twist on traditional team deathmatch and conquest modes evens the battlefield by placing beacons on skilled players riding long killstreaks. The more kills you rack up, the more opposing players are notified of your position. Doing so discourages exploitative camping and gives good players a run for their money by putting the X on their backs.

The Ground Control conquest mode features 32-player battles, but during our play sessions lag became an issue whenever large clusters of players and vehicles were grouped together. Homefront also features a progression system with 75 levels, weapon unlockables, and perks. Though I would have liked to see more weapons included, there is enough here to keep you busy for a tour of duty.

With its interesting premise, evocative opening sequence, and clever variation on multiplayer, Homefront has a strong foundation. It’s a shame that technical limitations and a derivative single-player campaign keep the game from realizing its potential. 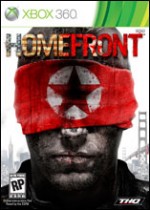 THQ's bold entry into the shooter genre features promising multiplayer, but the campaign comes up a few bullets short.

Purchase More Info
7
i
Game Informer's Review System
Concept After an economic and military collapse, America is invaded by a unified Korea
Graphics Ugly low-res textures, wooden characters, and stagnant lighting all contribute to the noticeably dated graphics
Sound Get ready for a lot of second-guessing from your fellow resistance fighters
Playability Competent shooting controls, but getting caught up on environmental objects is easy, so watch your step
Entertainment THQ and Kaos developed an interesting concept, but fail to deliver memorable gameplay to go along with it
Replay Moderate