Some gaming experiences simply aren't conducive to mobile platforms. Rather than try to translate Hitman's complex mix of stealth and action to touchscreens, Square Enix Montreal targeted a completely different genre and aesthetic for its new mobile spinoff. Surprisingly, the Hitman formula works well as a tabletop-themed puzzle game, but the underlying puzzle mechanics miss the mark.

Each level in Hitman Go provides a snapshot of one of Agent 47's exploits, presented in diorama form. 47 and enemy guards have been transformed into posed figurines, which slide through the environment on set paths. Other basic models and textures fill out the scenery, and the aesthetics are a clever and stylish way to encapsulate the action. Unfortunately, the equally simple gameplay is less captivating. On each turn, players move Agent 47 one space towards his goal. Afterwards, enemies take their turns, with each type exhibiting a specific behavior. Guards in blue coats stand motionless and stare straight ahead, orange guards walk back and forth in a straight line, and green guards wield knives and flip directions each turn. Getting spotted one space in front of an enemy gets you captured, while approaching an enemy from any other direction takes them off the board.

This simple formula results in more tedious trial-and-error than strategic planning, as you try to discover which combination of moves gets you and your enemies in the right position. It's kind of like chess, except you only have a king on your side, every piece can only move one space at a time, and the open board is reduced to a sparse network of interconnecting paths. Some levels feature items that give you more gameplay options, such as rocks that can be thrown to distract guards or sniper rifles to take out distant foes. Often, however, the solution still involves hopping back and forth between two spaces while you wait for enemies to line up correctly. Square Enix Montreal does a good job of steadily introducing new tools and additional enemy types, but they usually just make the subsequent puzzles more complex, not more interesting. Most levels contain three simple objectives to complete, such as picking up a briefcase, completing the level in the fewest moves possible, and killing everyone (or no one). These objectives are often at odds with one another, and aren't compelling enough to warrant a second playthrough. You end up having to replay levels anyway, however, because subsequent "boxes" (i.e. sets of levels) require a certain number of completed objectives. Acquiring enough to unlock all the content isn't particularly difficult, just more time-consuming; I was able to complete all three objectives on most levels in two playthroughs. Square Enix Montreal commits the unpardonable sin of charging real money for hints, which walk you through completing the selected objective. The puzzles were easy enough that I didn't need to use them, but requiring stuck players to shell out more money to continue is shameful.

The entertainment Hitman Go provides is a landscape of stunted peaks and shallow valleys. Every now and then a level or objective features a flash of creativity or requires a clever strategy, but these enjoyable moments are few and far between. At the same time, the solid difficulty balancing and continual introduction of new items and enemy types minimizes frustration and provides enough of a reason to keep playing. It's not Agent 47's best performance, but as always, he gets the job done.

Adults Only?
Don't be fooled by Hitman Go's confusingly inappropriate 17+ iOS rating. Although themed like the Hitman series, the "violence" in the game is as disturbing as knocking pieces off of a chessboard – because that's literally how kills are depicted. Squeamish players shouldn't let the rating scare them away.

This review was originally published on May 1, 2014, and pertains to the iOS version of the game. Hitman Go is also available on PlayStation 4, PlayStation Vita, PC, and Android platforms. 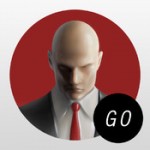 Agent 47's strategic adventure is now available on PlayStation 4 and Vita. Read our original iOS review to find out what you can expect.

Purchase More Info
7
i
Game Informer's Review System
Concept Turn IO Interactive's bloody action series into a simple puzzle game
Graphics The board game motif does a wonderful job of translating Hitman's world to mobile devices
Sound The shuffling of playing pieces is accompanied by a few songs, including the series staple "Ave Maria"
Playability The delay between finger swipes and the movement of your playing piece is a little annoying, but everything works fine
Entertainment Too much trial-and-error plagues the puzzles, which also don't have enough strategy or interesting choices
Replay Moderate