Mystery is the appeal of crime stories, whether they are real or fictional. We hear different accounts, look for clues, and see the police follow leads – and we form our own conclusions along the way. The drive to shed light on a mystery makes us want to search for answers. Silent Hill: Shattered Memories designer Sam Barlow capitalizes on this in his first independent game, Her Story. Her Story is one of the most engrossing games I've played this year, and that's mainly because Barlow doesn't just hand players anything  – he forces them to search for it.

In Her Story, your only job is to search a crime database by typing in keywords that bring up archived video clips. Your focus is on the fictional 1994 interrogation of a woman regarding her missing husband, and the videos in the database are from seven different interviews detectives had with her.

Keywords aren't hard to uncover. The game gives you a freebie ("murder") and you go from there. Every keyword you type only brings up the top five results, so you need to go through different avenues to discover them all, either by getting more specific or finding different keywords associated with the same event. You're not the detective on the case, but you're investigating the details for reasons that eventually become clear.

I questioned how fun it would be to just type in words at first, but it holds a lot more depth than what appears on the surface. I was obsessed with finding new phrases and details. During clips, the woman mentions various people, places, and things. Not only does this inch you closer to figuring out what happened, but they also provide new keywords to test out. What I loved the most was making a connection, and then typing it in to see an array of new videos to watch. Uncovering this flow of new information is when Her Story is at its best, but it eventually slows to a trickle. Later on, finding new content becomes trial-and-error; once I exhausted my trail of topics, I had to do some stabbing in the dark to unearth new leads.

To Her Story's strength, the majority of the videos are engaging, making me want to press on even when I had to guess. Some scenes have humor, while others contain twisted confessions. Not all leave you with great reveals, and some just contain a single word. The fun is finding out if that little clip means anything in the larger context of the narrative.

Also, seeing a real person interrogated instead of a polygonal character makes it easier to connect with the story, helping you buy into the scenario. The actress, Viva Seifert, nailed the role. It's not only the "what" and "how" she says things, but also her body language that forces you to question everything.

Barlow did a good job at writing a complex mystery. He gives you just enough to keep you invested, but he never spells out anything. In fact, the fragmented way the story is delivered works to its benefit. The subtlety of Her Story is what I appreciated the most, and drawing your own conclusions gives you plenty to think about at the end. You get some clear answers about what happened and why, but much is open to interpretation, casting doubt in my mind about my own deductions. That's how a mystery should leave you; even when people are convicted of crimes or proven innocent, we can't always be sure it's the right outcome.

Her Story forces you to pay attention in a way most games don't. I didn't want to miss one thread. Every word said could be a potential new lead, the dates on the videos are essential for making connections, and even certain visual differences in her clothes and appearance hold clues. I reveled in every "aha" moment, feeling a sense of achievement for catching even the smallest threads. For a more compact experience (about two or three hours), it certainly sticks with you. Her Story is an intriguing experimentation in game narrative. Its vastly different approach to telling a complex story is reason alone to play it.

8.5
About Game Informer's review system
Concept
Search a crime database of archived video footage to piece together what happened to a woman’s husband
Graphics
You won’t get big-budget graphics, but that’s part of the charm. The game is set in the ‘90s, so the technology matches the aesthetic
Sound
Sound is sparse, but what’s there helps create the mood. The shining star is the actress, who does a wonderful job portraying a whirlwind of emotions
Playability
All you need to know is how to type phrases into a database, making this game extremely accessible
Entertainment
Her Story is gripping. You won’t stop until you find answers, and it leaves you thinking long after the credits roll
Replay
Moderate 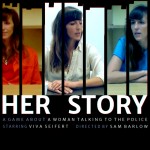