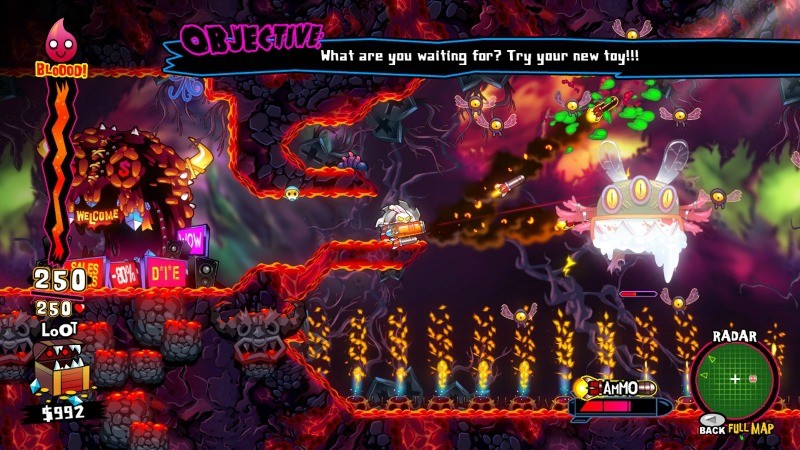 Hell Yeah is an enjoyable 2D sidescroller that waxes nostalgic about classic games just as much as it establishes its own identity as a “how-to” guide to murdering monsters in ridiculous ways.

One look at this game in action brings about comparisons to Metroid or Castlevania. World navigation is reminiscent to these classic titles, allowing players to leap to hard-to-reach areas for secret collectibles, and backtrack with different powers to open up new zones.

After spending a few hours in this world, that comparison doesn’t hold as much weight. Hell Yeah’s critical path is surprisingly linear and mostly free of exploration. Rather than letting the player figure out where to go, Arkedo Studio directs the gameplay flow, leaving most of the secrets and side missions to people who want to veer off of the beaten path. Depending on your approach, this game can be a quickly paced trip through cartoon Hell lasting five to six hours, or a slightly longer expedition filled with fun side missions and hidden collectibles to unearth.

The rapid-fire pacing goes hand-in-hand with the plot, which follows an undead and easily enraged rabbit named Ash, who just happens to be the prince of Hell. When scandalous pictures of Ash appear on the Helternet, he vows to kill all 100 of the hellions who viewed them. This insane quest spans the entirety of the game. It begins with a laugh-filled foundation and builds to a frantic, blow-the-living-crap-out-of-everything-that-moves rampage.

When it comes to murder, Ash is a bit of an artist. After depleting an enemy’s health with his conventional weapons, he performs a dazzling and absurd fatality. For one of his kills, he taps magical devil powers to summon a super-sized microwave oven that nukes a hellion until it explodes. Minutes later, another foe is dispatched by a hungry tyrannosaurus rex. The next victim is rendered unrecognizable by a hail of arrows. Ash even alters the world itself to suit his death dealing needs. A wrestling ring is used to deliver a piledriver from 200-plus feet in the air, and a few demons even end up in outer space. While most of the death sequences are repeated a few times, Arkedo has included a wealth of cleverly designed dispatching methods. The recurring sequences often feature some kind of goofy variation, too, such as the T-Rex returning with 3D glasses on. Before any of Ash's fatalities are initiated, players must first complete a quick, WarioWare-like minigame. These sequences are rarely fun to play. They deliver a chuckle at most, and often leave you thinking, "What the hell did I just do?" Failing a minigame results in Ash taking damage and the hellion regaining a sliver of health. The minigames are a bit annoying, but they tie in nicely with the overarching insanity. 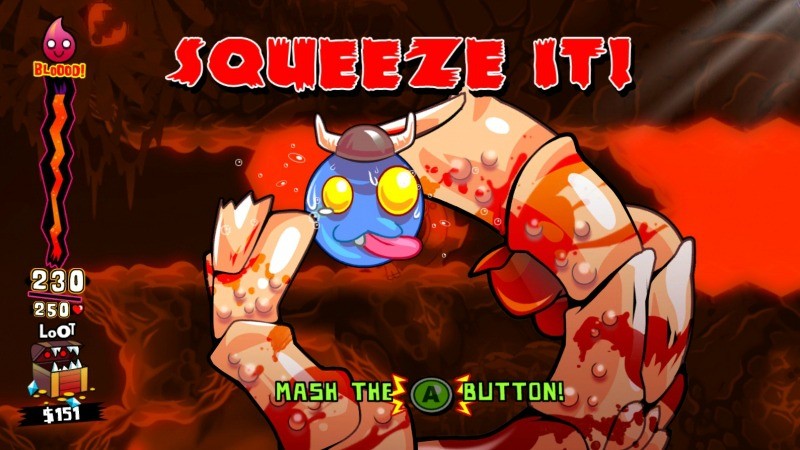 The majority of the hellions Ash encounters are mini-bosses. Most of these adversaries are located in ordinary parts of the world and can be engaged as soon as they are found. They are formidable in appearance but often fall after a few measly hits. Since the hellions are the primary objective for the entire game, I find it puzzling that most of them pose little to no challenge. As a result, Hell Yeah feels like a hunting expedition for unremarkable, wimpy foes.

That doesn’t mean the whole game is a cakewalk. The devilish worlds that the hellions call home are filled with deathtraps and platforming challenges. Ash dies instantly if he so much as grazes a spike. Paying homage to Mega Man, this death concludes with the devil rabbit exploding into energy balls. Timed lasers, swarms of basic enemies, and sections where Ash is weaponless also prove to be tests of skill that are similar in scope to the Blue Bomber's exploits. The variety in environment-based challenges is impressive. I rarely felt like I was being asked to complete the same exercises, even though the larger objective in each area simply involves killing enough enemies to proceed. Ash’s movements are swift, easy to read, and a perfect fit for the challenges Arkedo dreamed up. A jetpack-like after touch allows Ash to achieve a height he normally wouldn't, and also acts as a nice safety net of sorts for difficult platform navigation. 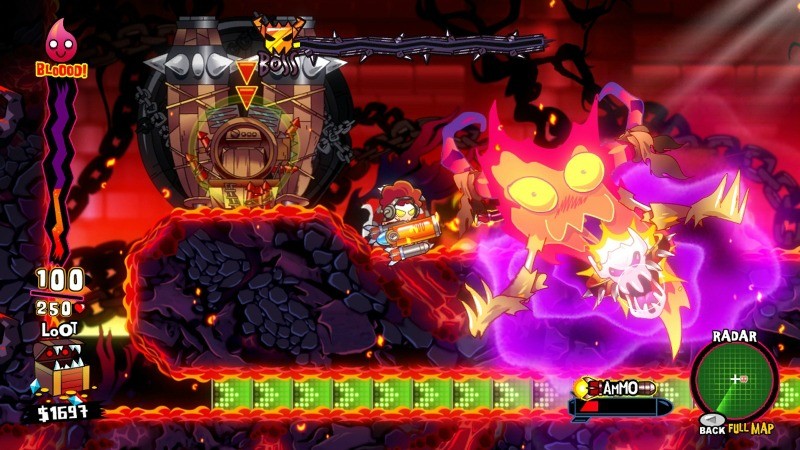 Ash’s arsenal also impresses. He starts with a spinning death wheel that chops enemies to bits and drills through rocky material. As you progress, his wheel is outfitted with an array of weapons. He eventually wields rocket launchers, machine guns, and laser rifles – all making use of a well-designed 360 degree targeting system. New firearms are delivered at a consistent pace, and enjoyable vehicle sequences are peppered in along the way.

An unforgiving checkpoint system and far too few health replenishment stations can stall progress. I ran into a few aggravating moments where I entered new zones with only a sliver of life left. At that point it's a judgment call: Do I go back to a previous zone, or push cautiously to find another health station or activate a checkpoint without getting hit? This is a minor complaint, but I did get a little frustrated a few times when hellish jaunts were negated. This is one nod to classic gaming I could do without.

Thanks to challenge-filled world designs, the quest to fell 100 foes is enthralling and constantly rewarding – even if they perish before you really get a good look at them. If you're wondering about Ash’s illicit photos, you'll get to see them during the credits sequence. Don't worry; his photos aren't nearly as graphic as Zach Galifanakis' in The Hangover.

8.5
About Game Informer's review system
Concept
An evil rabbit seeks revenge against 100 monsters in this enthralling 2D sidescroller
Graphics
Colorful and comically bloody. Environments are fairly mundane, but monster designs are imaginative
Sound
The soundtrack is all over place, but is mostly fantastic. A hilarious acoustic song accompanies one of the happiest levels in gaming, but other areas have grating rock melodies
Playability
The big bads don't pose much challenge, but the worlds they inhabit more than make up for their lack of firepower
Entertainment
This homage to gaming’s past is unique and enjoyable
Replay
Moderately Low