Hearthstone: The Grand Tournament is the second expansion set for Blizzard’s digital card game, tapping into World of Warcraft’s Argent Tournament for inspiration. A colorful collection of characters from murloc knights to King Varian Wrynn (I’ve affectionately titled that card “Varian Win” due to its ability to terminate the table) join the roster. In addition to offering a varied collection of minions, The Grand Tournament sets the stage for new deck archetypes involving dragons, totems, discards, and other strategies that were just a twinkle in ambitious deck builders’ eyes during prior sets. The big new mechanic, inspire, lets players get additional value out of their hero power by triggering certain minions when the power is used. Inspire makes that one damage mage pop or hunter arrow much more meaningful as the table gets flooded with multiple instances of minions featuring the mechanic, making one hero power use worth quite a bit more than its core effect.

Inspire is a fun mechanic that adds value to your “always available” hero power, and while we are already seeing a few inspire cards sneak their way into competitive decks, it’s also an incredibly cool ability in Hearthstone’s limited format, the Arena. Being able to sneak out additional value when you’re out of steam can make all the difference when both players are out of cards and just banging on each other with whatever is on the table. Tiny minions can grow via inspire, and larger legendaries like Confessor Paletress can swing entire matches after triggering the ability. Players can also embrace the joust mechanic, which bestows additional effects to cards if you win a “joust” of minion cards taken randomly from your deck (much like the clash mechanic from Magic: The Gathering).

On the surface, The Grand Tournament has a few issues, like many of the core cards being locked behind higher rarity tiers. For example, you probably won’t be able to pull together a dragon deck without two Twilight Guardians, and they’re locked behind epic rarity. Want to make a secret paladin deck? Your Mysterious Champions are also locked behind epic rarity. This wasn’t as noticeable in Goblins vs Gnomes, as the mech brigade mostly occupied more accessible slots. Thankfully, I haven’t seen a standout “must have in almost every deck” legendary like Dr. Boom in this expansion, but perhaps Justicar Trueheart may rise to that status.

In spite of their rarity, these cards shouldn’t be hard to acquire for those that have kept up with the game since release, but new players may feel too far behind to catch up. Luckily, Blizzard has implemented some new ways to provide additional cards and rewards. The weekly tavern brawl provides a fun format where players often don’t even need to use their own collections and can earn packs and complete daily quests, and The Grand Tournament rolls out a new ranked reward system. Players have been clamoring for a reason to climb the ladder each month apart from cosmetic card backs, and now it’s here – Blizzard made an intelligent move by capping the rewards at rank 5, so you won’t have to do the grind all the way to the top each month for the maximum rewards.

The Grand Tournament is a much-needed influx of interesting cards and mechanics for Hearthstone. It’s loaded with flavorful characters, cool abilities, and new goodies to keep the game fresh and interesting. If you’ve been waiting to jump into the digital card game craze, now’s a great time. 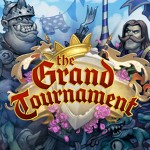 A colorful collection of characters from murloc knights to King Varian Wrynn join the roster in Hearthstone's second expansion.

9
i
Game Informer's Review System
Concept The Grand Tournament has come to Hearthstone with a collection of motley heroes and new mechanics
Graphics No leaps here from the original game, but some of the new cards have appropriately cool animations and effects
Sound New cards come with their own iconic sound effects that will soon be as pervasive as the Grim Patron’s “Everyone get in here!”
Playability New mechanics like inspiration and joust are easy to understand. Rookie players may have more difficulty forging a competitive deck, but new features have been rolled out to assist in that area
Entertainment With 132 new cards added to the pool, players have more strategies to experiment with than ever. The new cards are fun and fresh, adding a much-needed boost
Replay High