The first HAWX game offered some real competition in the air combat field, changing the action with new play mechanics and a tight (if predictable) plotline. Its sequel explores a number of clever variations on the air combat theme, but it’s not enough to make up for a weak story, sub-par production values, and the standard mission structure.

I appreciate the variety of scenarios in HAWX 2, but the game has lost something along the way. UAV drone missions, gunship attack situations, and stealth reconnaissance events offer respite from the standard jet attack and defend objectives. Unfortunately, most missions fall into that overly familiar vibe – blow up this ground site, defend this air vehicle, stop this invasion force. The bulk of the experience starts to feel reiterative in a hurry. On the other hand, if you’re looking for that tried-and-true formula, you won’t be let down.

Another admirable goal turns sour through questionable implementation. HAWX 2 does its best to communicate through cinematic storytelling; extensive voice work and frequent cinematics push players tell a tale of insurgency, covert ops, and betrayal. Much like Modern Warfare’s approach, the game constantly shifts back and forth between several different pilots in the U.S., British, and Russian air units. The result in this case is a mishmash of events that doesn’t come together until late in the game. Even then it feels forced.

The solid mechanics and big ambitions of HAWX 2 keep hitting the same snag; the good ideas never reach their potential. A leveling system exists, but you don’t care about the rewards. You fly different planes, but they rarely feel unique. This sequel won’t disappoint anyone looking for a standard midair action game, but it’s not going to change your perceptions of the genre. 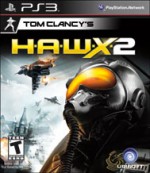 H.A.W.X. 2 explores a number of clever
variations on the air combat theme, but it’s not enough to make up for
a weak story, sub-par production values, and the standard mission
structure.