Humanity has wronged you for the last time.  Armed with an armful of expletives and some ammunition, you set out on your quest to take out as many people out as you can in a blaze of blind rage. While the concept behind Hatred begs for controversy and outrage, you will be hard pressed to care. For all of the shock and hullaballoo following its path toward release, Hatred is nothing special or particularly egregious in the world of video game violence, except for the fact that it relies on that violence alone. The game takes itself extremely seriously and has plenty of extremely violent content and murder, but it ends up feeling more like camp; you’ve probably seen this kind of thing before – and decades ago, at that.

Hatred tries to be more in-your-face with its violence by forcing you to engage. Since health regeneration is tied to grisly executions, civilians become your health pack pickups. But after the first level, you’re just going through the motions and moving on, unphased by the umpteenth time you see the same stabbing animation (I recommend turning these off for better game flow in the options). It doesn’t feel emotional; it feels mechanical. I felt more villainous when I trapped an unfortunate Sims character in a room with a barbeque than I did going up against the police in Hatred.

The twin-stick aiming, moving, and shooting aspects are fine. The overbearing problem is that you are never given anything interesting or new to accomplish. The process of shoot, scoot, and execute among a limited set of enemies becomes exceedingly rote and boring, with the repetitive environments doing little to break up the monotony. Developer Destructive Creations did a nice job using sparse colors for effect, but that means little when the game isn’t fun to play. Things culminate with an ending that’s as ridiculous as you’d expect. By that time, you probably won’t even care, and will just be glad you won’t have to go through another level of killing innocent people and then finding the exit. Don’t expect any connection to the world or lead character – other than sheer incredulity at some of the dialogue, which is a mixture of old-school Duke Nukem and an incredibly murderous Nathan Explosion high-strung on Linkin Park.

Even if the action isn’t consistently entertaining, the explosive weapons and objects placed around the world do a good bit of destruction. Leveraging the environment to your advantage is a lot more fun than trying to slog through combat with whatever firearms you have on hand, so you can do a bit of planning for your assault.

I experienced some serious technical issues while playing, such as sound on certain weapons cutting out, and a few hard crashes that cost me progress. I recommend mouse-and-keyboard play for this one, since controls on the gamepad by default are rough around the edges. Vehicle control is unwieldy, but luckily you don’t really need to drive anything around except for one level where you pilot a SWAT wagon. There’s also some unfortunate respawning situations, where if you find yourself surrounded by a mob of enemies at your respawn point, you might be flashbanged and taken out without much chance of a response.

Hatred is a marginal twin-stick shooter that rides the shock concept hard, and if you’re just looking for an angry protag-antagonist delivering deadpan death-lines as he dodges cop cars and fumbles changing guns, it might work for you. Not much else is here other than the novelty of the latest “ultraviolent” video game. It didn’t work for me, but I think Destructive Creations could tailor its twin-stick shooting chops into something interesting in the future. 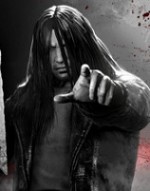 Humanity has wronged you for the last time.

Purchase More Info
5.5
i
Game Informer's Review System
Concept You’ve had it with humanity, so try to kill as many people as possible while going out in an angst-fueled blaze
Graphics Interesting occasional use of color against a monochrome backdrop
Sound The grim, deadpan statements from the lead character do little to enhance the experience, and I had issues with sound cutting out at various points
Playability Easy to get the hang of, use mouse and keyboard and not controller
Entertainment Hatred delivers fairly solid twin-stick shooting mechanics. However, it becomes incredibly boring, repetitive, and frustrating over time
Replay Low