In the final book of J.K. Rowling’s juggernaut franchise, Harry strikes out to foil Voldemort’s plans, leaving the iconic wizard academy of Hogwarts behind. This break from tradition works well as a part of the series’ narrative arc, but introduces a major problem for the game version of Deathly Hallows. Wandering around the school and interacting with its students were the primary redeeming factors in the last two entries, which raises the question: Can a Harry Potter game be fun without Hogwarts? Apparently not.

Instead of exploring the castle grounds and going to class, now Harry is shuffled from one tedious shootout to the next, flinging spells at Death Eaters in ruins and forests. I don’t mind that the old free-roaming gameplay is gone. What bothers me is the third-person shooting mechanics that replace it are staggeringly horrible.

Harry is confronted with a constant stream of moronic bad guys, who he dispatches by shooting various spells (which function as different types of ammunition). If the game worked, you’d be switching spells on the fly, strategically confusing or paralyzing one enemy while blasting the next. In reality, changing spells often slows the action to a crawl since you need to bring up the weapon wheel every couple seconds, so you’re better off sticking with one or two spells for entire encounters. Even then, the complete lack of variety in enemies and tactics makes every fight a bore.

When combat heats up, you’re supposed to take cover behind pillars and rocks, but good luck with that. The cover system is so touchy that even if you manage to find something to hide behind, the odds that it will actually protect you from hostile fire are minimal. You’re more likely to just stand with your back against the wall, trying desperately to escape from “cover” as you get stupefied from all directions. You can also forget about firing your most powerful spell, Confringo, from cover. Every time I tried, it hit my supposed protection and blew up in my face.

Things would be bad enough if Harry just had to contend with dark wizards, but stealth sequences give you a whole new reason to hate Deathly Hallows. Despite the fact that you own and use an invisibility cloak, Harry can’t seem to stay hidden to save his life. Your inevitable detection doesn’t necessarily mean game over, but it usually triggers a firefight against nearly insurmountable odds. You can just die, try again, and slowly give in to the dull hopelessness of Deathly Hallows.

The Harry Potter games were getting better. By focusing on the simple joys of exploring Hogwarts and casting spells, EA almost came within reach of making its last two entries entertaining. With Deathly Hallows, Harry regretfully returns to his roots by offering atrocious gameplay that no fan could enjoy. Like a Quidditch player falling from a broomstick mid-match, this installment loses all forward momentum and goes plummeting toward a faceplant at top speed.

The Edge
Even though the 360 version has exclusive Kinect challenges, they're just timed rail-shooting sequences that barely work. If you must buy Deathly Hallows, the PS3 and 360 versions are equally bad, so feel free to pick your poison. EA would not send us a pre-release copy of the Wii version, so we'll evaluate it and post a separate review at a later time if necessary. Otherwise, consider this our definitive review.
5.5
About Game Informer's review system
Concept
Watch Harry flounder and fail without the charm of Hogwarts to protect him
Graphics
The main character models look like their corresponding actors, but a lack of enemy variety means that you’re blasting the exact same punks over and over again
Sound
Expect to hear lots of shouting of ridiculous spell names
Playability
Nothing works well, from the camera to the cover system. Even switching spells is a pain
Entertainment
All enjoyment is buried under a suffocating mess of poor controls and tedious combat
Replay
Moderately Low 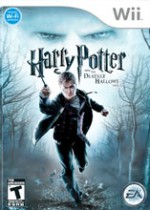