Defiant Development has revealed that Hand Of Fate 2, the sequel to the indie collectible card game/RPG hybrid from 2015, is now coming to PlayStation 4. The game was previously announced for both PC and Xbox One.

Captain Estrella Fiore will be a terror at range, and while her interests align with the player's, a fearsome companion. However, should the player find themselves on the wrong side of the Empire, Estrella will have some hard choices to make. On the tabletop, her unwavering persistence will also grant a second attempt during the new Pendulum minigame, designed to test precision and timing.

Our heroine will lean on Estrella and other companions for support as she clashes with all-new enemy factions, including the new Greed and Frost suits. The Greed faction employs  deadly assassins and alchemists to hound the player with swift attacks and evasive maneuvers, while Frost’s Northerner Giants leverage brute force and deadly homemade weapons to deal massive amounts of damage.

According to Defiant, we'll find out more about Estrella during PlayStation Experience.

If you want to see a trailer showing off some of the game, you can watch it right here:

The original Hand of Fate received a score of 8.75. You can read Daniel Tack's review of the game here. 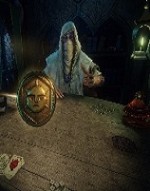