Though I enjoyed Halo 3: ODST, my praise comes with a few caveats. On one hand, the campaign is shorter than Halo fans are used to, and considerably smaller in scale. Instead of fighting to save the world as Master Chief, you play a nameless rookie just trying to reconnect with his squad. Series veterans have already seen most of the enemies and weapons they will encounter in the game, and some of the graphics — especially the faces of your human allies — look considerably outdated.

On the other hand, I can’t get enough of the game. Even after two marathon sessions totaling more than 20 hours of play, I was ready to jump right into another match. Although it might disappoint some, the limited scope of the plot also meant that I knew what the hell was going on for once, and the use of nonlinear flashbacks makes the storyline mysterious and intriguing. The fugly characters you’ll come across are quickly forgotten in light of the countless explosions you’ll see (and cause) throughout the game, each scattering vehicle fragments, enemies, and the occasional ally through the streets of New Mombasa.

ODST fixes a few of the problems plaguing the series since its inception. Players finally have a map of their surroundings, complete with clearly marked objectives and the ability to place your own waypoints. Backtracking, an irritating, consistent staple of the franchise, takes place primarily in the open-city sections of the game, giving you the ability to pick different routes through buildings and side streets even if your destination is somewhere you’ve already been. As for not playing as Master Chief? After getting used to the smaller jump and not having a shield (don’t worry, your character’s “stamina” works in much the same way), I didn’t miss the big guy one bit; my new sense of mortality only made my victories over enemy squads that much sweeter.

For most players, the single-player campaign will serve as a warm-up to ODST’s plethora of multiplayer offerings. The second, multiplayer-only disc is packed with value, sporting 24 maps, the full functionality of Halo 3’s Forge and Theater modes, and an insane amount of player stats chronicled on Bungie.net.

Even if you’re not a fan of Halo’s competitive multiplayer, the new Firefight mode is a refreshingly different experience for the series, delivering hours of fun in its own right. The mode takes the four-players-against-the-world co-op formula that’s so popular nowadays and injects it with the franchise’s top tier A.I. Instead of facing off against rounds of mindless cannon fodder (Gears of War 2) or undead enemies that run toward your explosives (Left 4 Dead), your opponents in Firefight mode are formidable and dangerously clever — even the lowliest grunt can be deadly when he starts whipping plasma grenades. Halo’s battlefields haven’t felt this intense and chaotic since the original game debuted in 2001. In just a dozen or so hours of play, Firefight mode delivered my most enjoyable experiences with the series to date.

Ultimately, Bungie’s newest adventure won’t sway those who have already made up their minds about the series; Halo haters will dismiss ODST as more of the same, while diehard fans will proclaim it the greatest thing since — well, Halo 3. Someplace in the middle is where ODST will make its biggest impact. If, like me, you’ve found yourself slowly falling out of love with Halo over the years, ODST provides a fresh, exciting experience that rekindles your interest in this seminal sci-fi shooter. 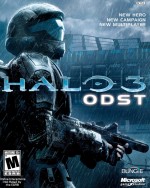 Halo 3: ODST
9.25
i
Game Informer's Review System
Concept Make an expansion pack that tells a new story in a different style, then sell it as a standalone title when you realize you made too much content
Graphics Sometimes ugly, sometimes breathtaking. The fact that all of your gameplay can be recorded, edited, and shared with your friends is pretty damn sweet
Sound The loud guns and louder explosions are topped only by Nathan Fillion’s hilarious one-liners
Playability Halo’s time-tested controls and forgiving aim assist mean you’ll rack up more headshots than ever before
Entertainment Fans of Halo have plenty to love
Replay High