Harder than Ever and Packed With Heavy Metal
by Matt Helgeson on Sep 22, 2009 at 02:03 PM
Publisher: Activision
Developer: Neversoft
Release: March 29, 2009
Rating: Teen
Reviewed on: PlayStation 3
Also on: Xbox 360 I still vividly remember getting my cassette of Master of Puppets in the mail from the BMG Record Club. As the Spanish-tinged, classical guitar intro of ''Battery'' gave way to the pummeling main riff, my little mind was blown. With all due respect to the Beatles, the baroque, epic thrash of classic period Metallica is the stuff for which this game was made.

Tearing through ''Orion'' on expert bass mode is a dream come true. From ''The Shortest Straw'' to ''Seek & Destroy,'' there is a treasure trove of fan favorites for old-school Metallica fans. Not only are they great songs, they represent a tremendous challenge for seasoned players. I expect many veteran Guitar Hero gamers will have to delve into the medium difficulty for the first time in ages. That's not even counting the insane Expert+ difficulty, which lets you recreate Lars Ulrich's machine gun blast beats with a splitter and two pedals.

While I knew I'd love playing the songs off the first four albums, the rest of the soundtrack definitely matches the intensity of the vintage stuff. It's clearly been selected by the band, and packed with quirky and fresh choices of tunes. Instead of a Queens of the Stone Age track, we get ''Demon Cleaner'' by Josh Homme's first band, Kyuss. Rather than a Danzig or Misfits hit, we get the menacing ''Mother of Mercy'' by Samhain. Black metal pioneer King Diamond shows up as a playable character and in the track ''Evil'' by his band Mercyful Fate. All in all, it's got perhaps the best hit to miss ratio of any music game to date -- although it's not aimed at the casual party crowd.

Perhaps inspired by the band they so love, Neversoft has dramatically improved the visual presentation. Extensive motion capture sessions with the band have yielded a host of realistic animations and dramatic, 360-degree camera work. Stage sets based on the band's real-life tours and extensive pyrotechnics displays also help deliver a better sense of authenticity than Guitar Hero: Aerosmith. Also, the improved character models are leagues better than any in the series' history. The only misstep is the cheesy cartoon storyline, done in the style of the last few games. It seems out of character with Metallica's image, and I would have preferred more documentary-style footage (I did appreciate the fan-shot videos and visual archive in the extras menu). Still, it's a small quibble with a game that provides a whole lotta metal for your $60. 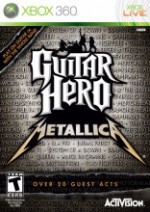 Guitar Hero: Metallica
Purchase More Info
8.75
i
Game Informer's Review System
Concept Guitar Hero. Metallica. The name says all there is to know
Graphics Impressive in-the-round staging and dramatic camera angles make this the most visually exciting GH game yet. Even better, the characters models don't look like Muppets anymore
Sound If you love metal, you'll be in heaven. For my money, Metallica is the ultimate Guitar Hero band. While we were excited for the vintage tunes, a lot of the '90s material and beyond holds up very well
Playability The guitar and bass play is spot-on, and the new Expert+ mode on drums will have you begging for mercy
Entertainment A challenge for Guitar Hero freaks, and a boon to Metallifanatics; there's a whole lot of metal power packed on this one disc
Replay High