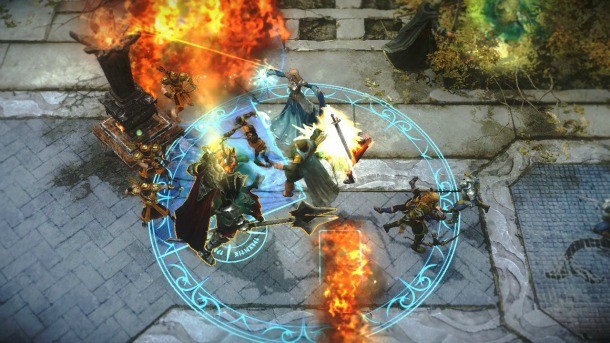 Every aspect of this Lord of the Rings-flavored MOBA is clearly modeled on Riot’s juggernaut League of Legends, but sometimes I’m in the mood for Guardians’ simpler and more streamlined experience. Frequent network problems are a tragedy for this exclusively multiplayer game, though, and often obviate the many smart and successful things that Monolith Productions has accomplished in the design.

Guardians of Middle-earth follows the established MOBA paradigm: Waves of creatures spawn at two opposing bases and smash into each other along three lanes, while five players on each side use a single hero unit apiece to turn the tide of battle. The single-lane variant is a faster, more intense experience that lacks the strategic depth of the traditional three-lane map, and quickly grows stale in comparison. Players grow exponentially in power as they level up, making the lost time waiting to respawn after a death a massive penalty. Eventually, one side overpowers the other enough to march into the enemy base and destroy the citadel, winning the game.

A handful of differences keep this from being a total League of Legends clone, like the removal of gold (and the associated item shopping), and the out-of-lane shrines that grant buffs to the teams that control them. They all add up to a streamlined experience that works on a basic level and removes some of the more esoteric aspects of traditional MOBA play at the cost of making comebacks massively more difficult to achieve.

I appreciate how easy it is to pick up the strategy, since you don’t have to worry about gimping your team by not knowing the hundreds of items and how their various stats and specials interact with your chosen champion’s power set like you would in LoL or Dota 2. The learning curve still exists, but we’re talking about a dozen hours of playtime instead of a dozen days to get your feet under you. The early- and mid-game jousting for control over lanes and neutral monster camps is my favorite phase of any MOBA, and that’s the aspect that Guardians executes best of all. 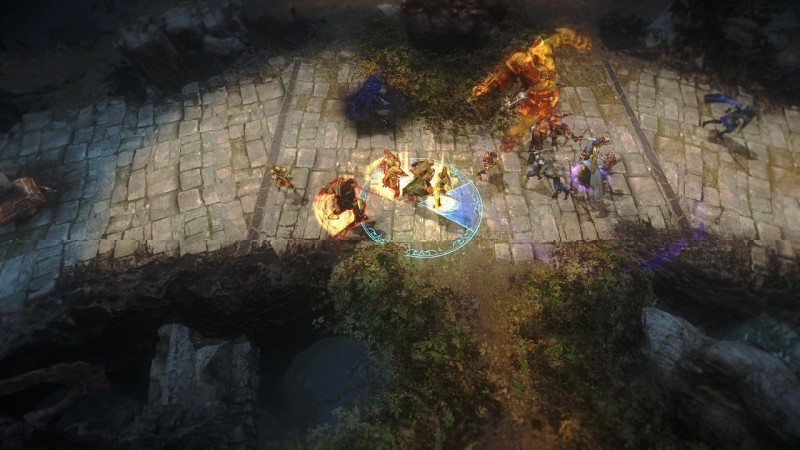 The downside is that reversing the trend of a match going in the other team’s favor is extremely difficult. Carries (hero builds that combine stats and powers in such a way that they explode in power to “carry” a team in the late game at the cost of relative early ineffectiveness) are a huge part of MOBAs, yet the concept is almost entirely absent in Guardians. You can’t hope for a dramatic turnaround when your archer teammate goes from mediocre to awesome by completing a crucial item, for example. The position of the shrines and buff-granting neutral monsters in the middle of the map means that once a team has enough of a lead to start pushing beyond the halfway point they basically have permanent control of those helpful buffs. In my experience, the team ahead at the five-minute mark goes on to win the match the vast majority of the time – it just takes another 10 to 20 minutes to slowly grind down the opposition.

I like the rest of the game enough that the difficulty of reversing a match’s flow isn’t a huge problem, though. Pulling off awesome tricks like blinking behind enemies and using a knockback skill to launch them under your tower to die horribly is just as gratifying in Guardians as in LoL or Dota. Personal skill, teamwork, and communication are all equally important, and the side that combines those aspects best is always the team that wins. Map awareness is crucial, as it should be; I’ve lost count of the kills I’ve scored thanks to sneaking through the jungle to pop up behind enemies that have pushed another lane too far. The moment-to-moment gameplay is truly excellent – until you start lagging or get dropped out of the match.

Evaluating network performance is always difficult thanks to the dozens of variables in play, but Guardians of Middle-earth is consistently poor enough in this regard that it must be noted. Ability timing gets seriously weird as matches progress, to the point that landing a melee-range root ability ends up with an enemy taking three steps away before their movement is arrested. Input lag results in too many deaths that occur seconds after hitting the button for a healing ability only to have it never trigger. Worst of all, I’ve disconnected from one out of every 15 matches or so – and with no way to rejoin after a network burp drops me out, you can lose 20 minutes of progress or more. Getting booted in the middle of an epic killstreak is one of the most frustrating things I’ve experienced in years.

Guardians of Middle-earth is an excellent game hobbled by bad network performance. I am continually drawn back to the exceptional gameplay, only to be repulsed by a disconnection or unbearably long matchmaking queue. I can see myself playing this for months on end if and when Monolith solves the lag and connectivity problems.

7.5
About Game Informer's review system
Concept
Bring the broad strokes of the wildly popular multiplayer online battle arena (or Dota-alike, if you prefer that term) PC genre to consoles
Graphics
The top-down view limits detail, but the look and feel of the excellent Peter Jackson films shine through
Sound
The sound-alikes for film characters are outstanding, and contextual unit barks draw out the drama inherent in every match
Playability
The developers did a great job of designing around the gamepad’s strengths and weaknesses, but network lag regularly produces questionable results
Entertainment
Network problems, from lag to far-too-frequent disconnections (with no way to rejoin the match, thereby losing all your rewards from it), almost entirely sink this otherwise good game
Replay
High