Back in 1996, Guardian Heroes released on Sega’s beleaguered Saturn console. Though it received strong reviews, Sega never ported the game to another console. For this reason, it’s remained below the radar with only a cult following singing its praises. Now Sega is giving the game a second chance with original developer Treasure handling the revamp for Xbox Live Arcade. At $10, it sure beats paying over $85 on eBay for the original North American boxed copy.

Guardian Heroes begins when a small group of adventurers finds a long-lost legendary sword and gets caught up in a battle between opposing powerful beings. The four initial playable characters all have unique roles in battle. Han is a tank, Randy a black mage, Ginjirou a speedy ninja, and Nicole a white mage.

Rather than walking on a single 2D plane or allowing characters to move freely vertically on screen, Guardian Heroes uniquely features three distinct planes that players can jump between, moving closer or farther from the screen. This seeming limitation actually frees up the moveset, allowing players to enter Street Fighter-style button combos to unleash tons of special moves.

You shift between planes using the left trigger and bumper, and characters jump by pushing up on the left stick just like a fighting game. The special moves are activated much like a fighting game as well. Using the half-circle motion combined with the magic button, for example, unleashes homing fireballs. Various other combos make all your other spells instantly accessible as long as you have enough MP.
Physical attack specials work the same way (think adaptations of Street Fighter’s dragon punch or hurricane kick), but don’t drain magic so you can go nuts. The depth offered by this combat system is impressive, though it takes a while to learn the basics and master each character’s specialties. The training mode facilitates this process well.

Two players can team up to take down the forces of evil both on- and offline. While I understand that adding more co-op partners would throw off the original’s balance, Sega’s insane for not bumping the count up to four. Fans would go crazy over finally having all four characters (plus the fifth unlockable character) battle alongside each other after all these years. This is especially disappointing considering that they doubled the versus mode player limit with no qualms (more on this later).

A powerful A.I. partner teams up with you whether you’re playing co-op or single player. This Golden Warrior is an undead creature that seriously kicks ass on his own and can accept optional basic commands. His best move is a screen-filling explosion that kills nearly every enemy on the map. Sometimes you’ll curse him for stealing your kills, but other times you’ll thank him for saving your life. He’s essential if you’re playing as a low defense mage character.

One tenet that will blow newcomers away is the multitude of branching paths in the campaign. On almost every level, you have to make a choice on which stage you’re headed to next, ranging from two to five options. Depending on your choices along the way, you can see all new levels, enemies, and even final bosses. This gives Guardian Heroes the best replay value of any brawler out there. The game keeps track of your previous decisions in the gallery, but I would have preferred some kind of bracket showing the whole pathing system that appears whenever you have to make a choice. Guardian Heroes also includes an RPG-style leveling system that allows you to spend points on six basic skill stats like strength and vitality. If you spam a single category, you’ll notice a big difference, while spreading points evenly everywhere makes the benefits more difficult to detect. Castle Crashers and Scott Pilgrim vs. the World fans will be disappointed to know that your stats all reset once you beat the game or land on the game over screen. It would have been a lot more fun to max out every character and take them into harder difficulties. Treasure could have taken a page from Konami’s Hard Corps Uprising playbook and included both a traditional arcade mode and an alternate mode that allows for persistent character progress.

Plenty of other new bells and whistles spice up the old game, however. You can play with classic pixelated graphics or with a slick new pencil-shaded look. The original game’s rules and controls are available alongside a new remix mode that simplifies melee attack controls, enables continuous sprinting, slowly regenerates magic, and includes a few other smaller tweaks. The new arcade mode pits an endless stream of foes against you in an arena, challenging you to survive the longest with the highest tally of kills. But outside of climbing the leaderboards, there’s no reason to keep coming back.

Versus mode allows up to 12 players to battle online. While this sounds cool on paper, it’s a big mess. You spend most of the time trying to find your character onscreen as attacks come from every direction. Keeping the total player count lower can provide a more clean fight. Either way, watch out for people with poor connections because they can easily drag the whole match down into a laggy mess. I had the most fun fighting locally with people on my couch. The four-player limit here feels just about right.

The biggest disappointment is the way difficulty and rewards are structured. Easy mode is a blast, with more lives than you could ever use. But you don’t unlock any of the 40-plus bonus characters for versus mode, nor do you unlock the one bonus campaign character unless you play on normal difficulty. The enemies aren’t much more powerful, but you only get nine lives to last the whole campaign. If you run out of lives you lose all of your progress and have to start the entire game over. I sweat my way through the normal campaign, but it’s no fun having to play so conservatively and letting the Golden Warrior do most of the dangerous work.

If you’re playing co-op, you have to share the same nine lives, so it’s even worse. Unless your buddy’s a Guardian Heroes master, you probably won’t make it to the end without someone inevitably draining the shared life pool. I could understand having to restart a stage after you lose all your lives, but not knowing if you’re going to waste the next 20 to 30 minutes of your life starting the game and losing everything is just a bummer. Hard mode only offers three lives, which is even worse, but at least it has proper billing.

Even though some aspects of Guardian Heroes haven’t aged well, the strength of the battle system, branching paths, and characters help this brawler retain its place near the top of the class. Weird Gameboy Advance entry aside, I’d love to see Treasure return for a proper sequel that doesn’t feel inclined to cling to some of the outdated elements of the source material. 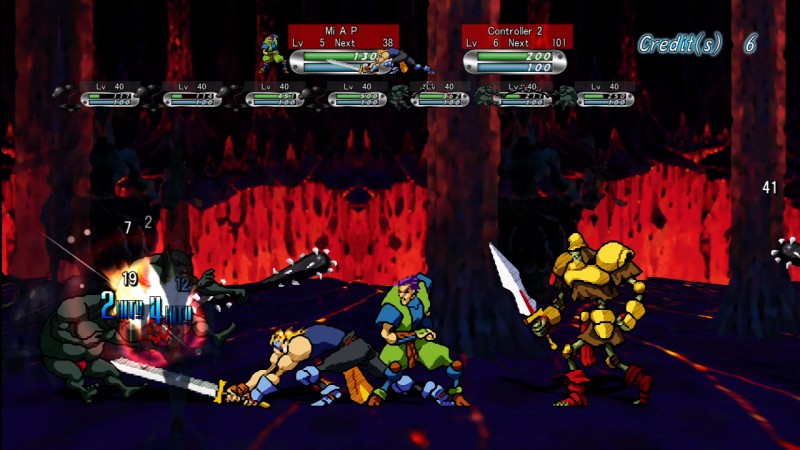 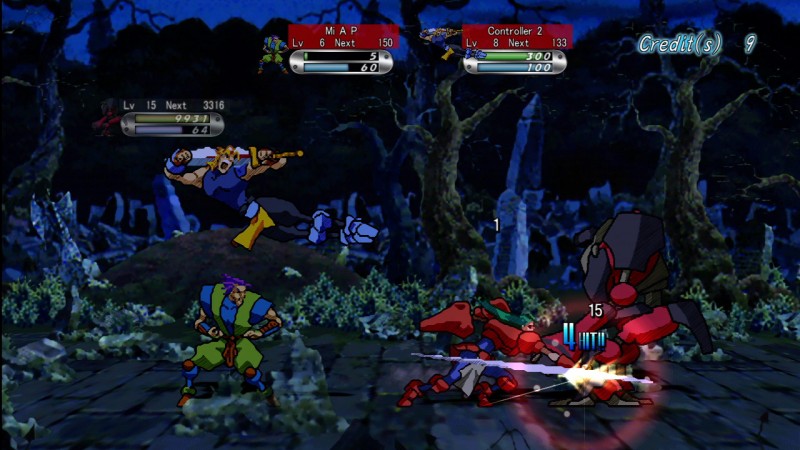 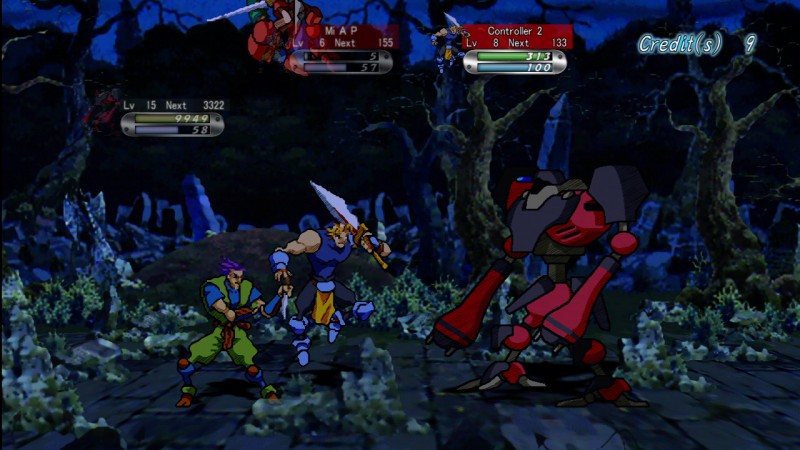 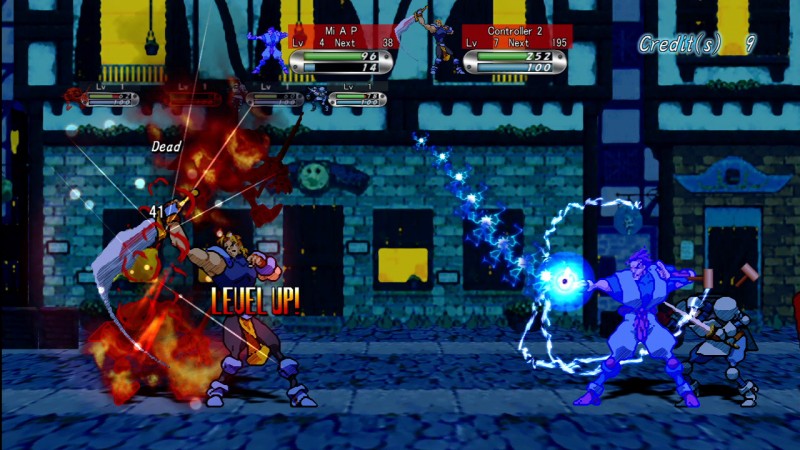 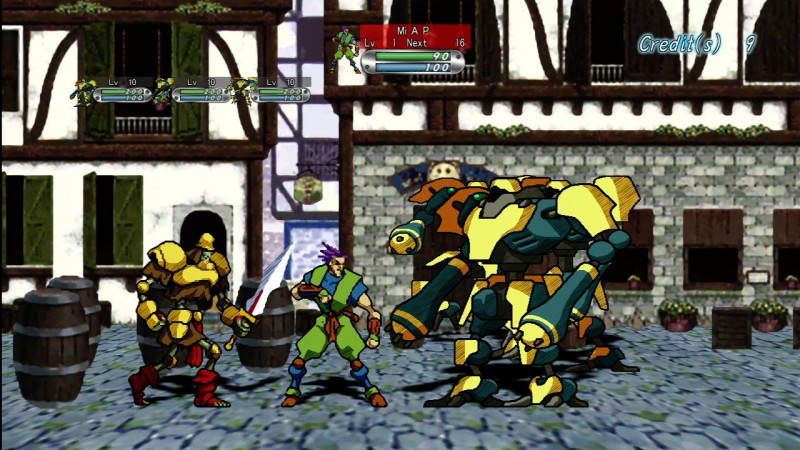 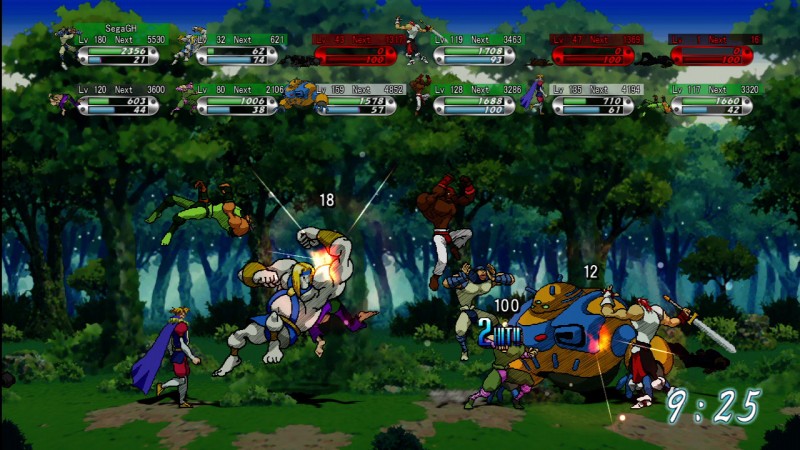 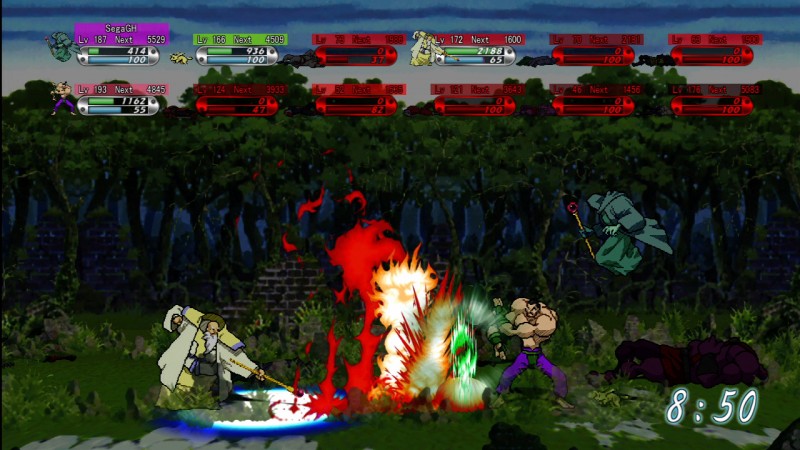 8.25
About Game Informer's review system
Concept
Bring Treasure’s rare Saturn beat ‘em up to the masses
Graphics
The old pixelated sprites are still there, but you can select a smoothing filter that makes characters look hand-drawn
Sound
Loads of classic tunes blend with attack yells and cries of pain
Playability
The Street Fighter-style specials provide more depth to standard punch, kick, block brawler tropes
Entertainment
Brawler fans owe it to themselves to experience this lost classic. Just don’t expect some of the advancements made in the last decade
Replay
Moderately High 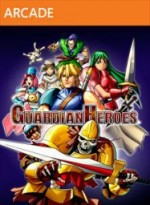