Just like Patrick Callahan's fictional WSR league in Grid 2, the Grid racing franchise has a reputation to think about. While Callahan is trying to build his, Grid has one to maintain. The series has been absent for almost five years, and some of its key elements such as multi-discipline racing, flashbacks, and a certain slickness and sense of style have been used by other racing titles. Time may have moved on, but my expectation for the Grid series to remain at the forefront of the genre has not changed. Grid 2 retains much of what made the first alluring, but falls short of pushing racing games forward like the original.

The WSR (World Series Racing) league is the wrapper for the single-player experience, and your mission is to help it gain prominence by recruiting different racing clubs (by beating them in races, naturally) from around the globe who specialize in various race events to gain their participation in subsequent seasons of the WSR. In turn, these are amalgamations of the different racing types (like elimination, Touge, one-one Faceoffs, checkpoint, etc.). You progress by earning fans for the WSR, which are gained through races and special promo events that present other modes like the fun Overtake races (where you try and pass as many slower trucks on the track as you can).

The WSR experience may be punctuated by special in-studio ESPN segments, a garage operation that grows with you, and sponsorship requirements, but the actual act of growing the league isn't the strong motivator that it's supposed to be. Racing in the league itself feels repetitive by the time you get through the club recruiting process, and when the WSR season racing starts, your opponents' clubs don't really matter. The league is supposed to be about determining who the best racer on the planet is, but it lacks the storyline and general sports drama to make that search compelling. Perhaps including situational races (like going worst to first or nursing a limping car to a win over the last two laps) would have helped.

Grid 2's LiveRoutes system – where upcoming junctions are populated on the fly to avoid track repetition – helps alleviate the lack of drama, and is where this game shines. Not having a mini map during these races elevates the heart rate a few beats and puts your racing abilities to the test. LiveRoute races make you balance the instinct to be cautious because you don't know what's around the next corner with the urge to drive as fast as you can.

Further diversity occurs in the multiplayer, which lets you generate a playlist of races and includes new matchmaking for racers to tell you who races naughty versus nice. It also also contains Codemasters' free, account-based RaceNet platform. This generates weekly rivals and challenges, keeps track of stats, and has a browser component. Like in the single-player, vehicles are grouped in four tiers, but these unlock as you attain higher levels, and the cars themselves can be upgraded (unlike single-player).

I like that Grid 2's multiplayer carrot tastes slightly different than the single-player one, but ultimately the game – apart from the LiveRoutes system – isn't the revelation that I was hoping for. Codemasters has proven that it can deliver a compelling racing experience on the track, but we'll have to keep on waiting for the next big leap forward. 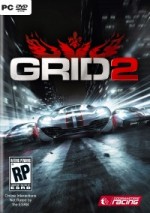 It's been almost five years since the original Grid, but my expectation for the series to remain at the forefront of the genre has not changed.

Purchase More Info
8.25
i
Game Informer's Review System
Concept Recruit the best racers around the world by taking them on in events, and then go up against them in World Series Racing seasons
Graphics The LiveRoutes sections of tracks fill in without any trouble, which helps make these races a lot of fun
Sound Your engineer's chatter is repetitive and annoying, but he mentions sections of the track you've had trouble with in the past. Also, on the last lap dramatic music kicks in
Playability A lot of the cars and courses favor those who can handle RWD cars
Entertainment The racing is fun, but the hype surrounding the World Series Racing league doesn't pay off
Replay Moderately High