In this sequel story to Warner Brothers’ recent motion picture, Green Lantern Hal Jordan (played by a refreshingly joke-free Ryan Reynolds) is called upon by the Guardians of the Universe to stop the robotic manhunter race from stealing a prized artifact from a vault hidden on the Lantern homeworld of Oa. The manhunters’ heist strategy isn’t clearly illustrated, but I’m fairly certain it has something to do with boring the Lanterns to death.

Rise of the Manhunters' chief gaffe is enemy repetition. Roughly three quarters of the way through the first level, I found myself saying “these robots again?” and “how many of them could there possibly be?” This is the first of ten levels, most consisting of the same enemy types or subtle variations thereof. Hardly any of the manhunters bring excitement to the battlefield. The larger manhunter enemy types pose a decent challenge, and the worm manhunters (don’t ask) add a layer of strategy to the later stages of the game, but most of the foes are on the battlefield for the sole sake of being turned into scrap.

That’s where the fun lies. Hal Jordan is an exceptionally gifted combatant, capable of chaining together lengthy 99-hit combos in seconds flat. All of his attacks are constructs created by his power ring. He can summon a hammer or sword to beat foes down, or tap into his Air Force knowledge to manifest a fighter jet or a guided missile attack. These manifestations are integrated into a fluid hack ‘n slash combat system loaded with strategic depth. Up to eight different ring constructs can be assigned to the controls at any time, and many bring different range-based opportunities to the fray.

Most foes are easy to defeat with any attack, but I did everything I could to keep the combos alive as experience point percentage bumps are rewarded for higher combo strings. Players can use experience points to purchase new attacks and ring enhancements. If every item is purchased in a category, an achievement or trophy is rewarded. Yes, this is an easy game for bumping gamerscores and ranks.

It’s too bad that the combat scenarios don’t offer more variety. Levels stretch on and on, and the puzzles and path clearing actions that are thrown in to breathe variety into the experience are rarely clever and usually just slow the game down. Although co-op normally makes games better, Rise of the Manhunters’ local co-op just makes the game easier. Since your friend is making short work of enemies, it reduces the odds of chaining together gigantic combo strings. The co-op player plays as Sinestro, who is just a purple version of Hal, complete with the same ring constructs based on Earthen items.

A handful of Star Fox-like flying sequences are thrown into the mix, but the shoddy targeting system and ridiculously overpowered lock-on missile attacks removes most of the excitement. At most, these sequences are a nice break from the lengthy hack n’ slash levels.

Rise of the Manhunters makes good use of the Green Lantern license, yet struggles to deliver an intense combat experience. It ends up feeling like an excruciatingly long game, despite it offering only six to seven hours of gameplay. 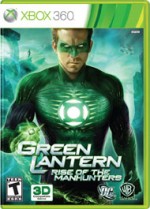 Repetitive robot dismantling in the far reaches of space.