Hunter S. Thompson, the famed gonzo journalist who rode alongside the Hell's Angels during its rise to infamy, once said, ''in a closed society where everybody's guilty, the only crime is getting caught. In a world of thieves, the only final sin is stupidity.'' This is the rule that Johnny Klebitz, vice president of The Lost biker gang's Alderney chapter, tries to live by. The only problem is his ex-girlfriend is a meth-head who constantly puts him in compromising situations, some of the guys he rides with couldn't spell Lost if it wasn't stitched on the back of their leather jackets, and the drugged out leader he takes orders from is hell-bent on drawing heat with a very public war on a rival bike gang. Being surrounded by this much stupidity doesn't help keep you from getting caught.

Grand Theft Auto IV: The Lost and Damned throws out the ''American Dream gone awry'' theme of Niko Bellic's tale for a much darker look at a fading chapter of the nation's crime lore. Once heralded as the biggest threat to American society outside of communism, the dwindling leather-clad biker gangs in Liberty City now settle for small headlines and even smaller scores. For Johnny, the strength of The Lost is brotherhood - an unbreakable bond where you stick up for and take care of one another down to your dying breath. This oath becomes increasingly difficult to uphold as those around Johnny continually test his allegiances.

The brotherhood theme shines through most brightly in the new biker crew system. Unlike Niko, Johnny is seldom left on his own. Lost your ride and need a chopper? Call Clay, he'll drop off a new one. Need some new weapons and ammo? Meet Terry by his van and he'll sell to you at a discount, including explosive new weapons like the grenade launcher and pipe bombs. Even during missions, Johnny can recruit bikers to aid him in criminal exploits. Make the call for backup and within minutes your gang of badass bikers on choppers will take up formation behind you on the highway. These goons may not be sharp shooters, but those who survive gunfights become hardened soldiers with much larger health bars. Rockstar missed a great opportunity to give the players more control over their gang – being able to change their weapon loadouts and battle strategy would greatly aid the fights – but having more guns at your side helps regardless.

The gang fellowship is also on display throughout Liberty City. The boroughs are littered with optional territory missions and road-rash style biker races that allow you to club competitors with a baseball bat. The Lost headquarters in Alderney is always filled with jovial bikers participating in arm wrestling, hi-lo card games, and memoriams for their fallen comrades. Johnny can join his brethren for any of these activities, but these minigames are more of a pleasant distraction than a destination.

Though The Lost and Damned is a standalone experience, fans of Grand Theft Auto IV's story will appreciate the occasional nods to Niko's exploits. During his missions, Johnny comes across many familiar faces, including Elizabeta Torres, Ray Boccino, Roman, and Niko himself. Viewing the characters from a different angle gives new insight to their personalities and motivations. The missions themselves are by-the-book GTA fare - steal some vehicles, shoot some baddies, score some scratch - but an intense motorcycle police chase after a drug deal gone bad and a prison break of a different nature stand out as highlight moments.

The expansion also features five new multiplayer modes centered on the motorcycle experience-including a gimmicky Chopper vs. Chopper mode where a player in an unwieldy helicopter must hunt down a motorcyclist, an entertaining road-rash style Biker Races, and co-op missions that allow you to roll with a few other friends to earn your chapter some money. The standout mode is Witness Protection, where a biker gang must overrun a convoy of cop cars protecting a bus full of witnesses about to turn state's.

The Lost and Damned makes me feel bad for PlayStation 3 owners everywhere. Gamers on the GTA hate train won't find anything to change their minds here, but series fans shouldn't miss this incredibly deep expansion pack. 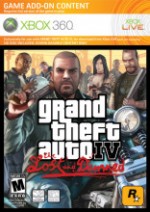