Can Rockstar's Juggernaut Franchise Turn Heads on Handhelds?
by Andrew Reiner on Sep 22, 2009 at 02:03 PM At a glance, Grand Theft Auto: Chinatown Wars appears to draw similar inspiration. The isometric view harks back to the series' first attempts, and I once again found myself counting the pixels in my character's body. These are the only elements that are of the nostalgic flavor; the majority of Chinatown Wars' content falls in line with Grand Theft Auto III and IV. Liberty City is a thriving three-dimensional world. Citizens open umbrellas when it rains, run for cover when you let your guns do the talking, and become fruitful money-giving red stains when you ''accidentally'' park a fire truck on top of them. While it's nearly impossible to differentiate the look of the citizens, the city itself is gorgeously rendered with familiar locales and the smallest of details. You can see chunks missing from concrete walls, years of wear and tear on store signs, colorful graffiti in dark alleys, and beautiful landmarks like a dragon statue on a Chinese restaurant. If you are familiar with the lay of the city from GTA IV, you will notice that the Alderney borough is missing, and some of the streets have been condensed or outright removed. Moreover, all of the action takes place on the streets; the only time you'll see an interior is in a cutscene. The smaller playfield is hardly noticeable, however, as you don't spend much time in the same area before being asked to travel to a different location.

The biggest change comes from the intentions of protagonist Huang Lee. He isn't just packing heat under his coat. He may also be carrying marijuana, cocaine, acid, ecstasy, heroin, or downers. Lee is a drug dealer, and completing story missions isn't enough to get him through the game. Lee also has to earn his keep by selling drugs to progress further in the narrative. To be successful as a dealer, you'll have to buy low and sell high. Demand is always changing, creating situations where you'll have to sit on your supplies and wait for the right opportunity. The thrill of turning a profit is an addictive addition to the game's already large pool of activities.

Keeping the citizens of Liberty City stoned is just a small part of the action. Like any other GTA title, almost every mission brings new challenges, and of course, unexpected twists like firefighting or dumpster diving. The touch screen opens the doors for additional layers of complexity. In one mission, you are asked to damage a racecar. In previous iterations in the series, you likely would approach this hostile aggression with a baseball bat or crowbar. In Chinatown Wars, the caveman approach is replaced by a multi-tiered assault on the racecar's engine. With different stylus strokes, you'll sever the oil line with a wire cutter, smash the fuel injector with a hammer, and finish the job in style by putting a fish in the radiator.

Most of the touch screen functionality is brilliantly interlaced into GTA's seedy world, offering big laughs, outstanding controls, and challenges that you wouldn't mind doing 10 to 20 times – like throwing away your money on scratch cards, or giving your gang members awful tattoos. The touch screen is also used effectively for selecting weapons and lobbing ­grenades.

Most of the controls are mapped closely to the console versions. Jacking cars, hopping fences, and calling for a cab are handled cleanly. Despite what you may think, the limited visibility from the overhead camera doesn't affect driving. Even at the highest speeds, you can roar around corners and thread the needle through tightly packed traffic. From garbage trucks to motorcycles, you can ride how you want to, and store your favorites in a garage. The concept behind police chases has changed, now pushing players to wreck police vehicles to lower the star count. In a way, the prey becomes the hunter. Knocking the fuzz into oncoming traffic and buildings is an adrenaline-filled riot that should be explored in the next console entry.

As comfortable as I felt behind the wheel, I never got the hang of the gunplay. The targeting system has a mind of its own. Manipulating it in the ways you want is difficult, so I mostly let the game dictate who got shot next. The isometric perspective also works against the art of gunplay; most fights unfold on one screen, and they don't take long to devolve into an ant-like commotion with everyone crowding into the same space. From these difficulties, I was surprised that Lee never accidentally shot himself – something I wouldn't mind seeing, given how annoying his dialogue can be in the narrative. Lee and most of his supporting cast are unlikable buffoons better suited for the satirical roles of classmates in Bully. The plot, which delivers the intriguing hook of hunting down a ceremonial sword, suffers when seen through the eyes of morons.

Chinatown Wars stumbles occasionally, but it also pushes the series forward in numerous other ways. Don't let the diminutive size or nostalgic look fool you, this is just as complete of a Grand Theft Auto experience as any of the console iterations.

9.25
About Game Informer's review system
Concept
Rockstar has crammed an entire GTA experience onto the DS cart. Gunplay and storytelling come up short, but new gameplay avenues keep you glued to this crime caper
Graphics
Liberty City hasn't lost any of its life. Stylish still-frame cutscenes effectively convey the story
Sound
The ambient sounds of the city establish the setting well. The radio stations also pump out catchy synth-heavy licks
Playability
Gunplay is a messy affair, but the driving, drug trade, and new touch screen functionality are handled without fault
Entertainment
Hardly any concessions were made in bringing GTA to the DS. This is a full-on GTA experience
Replay
Moderately High 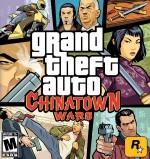