While the title would suggest it’s a sequel, the original Grand Slam Tennis was a middling, Wii-only title with cartoonish graphics and a casual approach. Grand Slam Tennis 2 is a hardcore sim that attempts to present a realistic brand of tennis with a broadcast TV-style presentation. ESPN graphics, dramatic camera angles, and insightful (if repetitive) commentary by John McEnroe and Pat Cash make this the first game that really delivers the glamour and drama of the pro tennis circuit. A strong roster of current and classic pro players includes the “Big Three” – Djokovic, Federer, and Nadal – along with the Williams sisters, Bjorn Borg, John McEnroe, Stephan Edberg, and Martina Navratilova. You can also reenact classic past Grand Slam moments in the ESPN Grand Slam Classics mode, which mimics the Jordan Challenges in NBA 2K11 or the Madden Moments. Still, there are some notable omissions. In future games, I’d like to see Andre Agassi, Jimmy Connors, Steffi Graf, Monica Seles, Ivan Lendl, and Jim Courier added.

The career mode is fairly standard, balancing training sessions with John McEnroe, tournaments, and exhibition matches in which you earn points to unlock new gear and rackets. It’s notable for being the first tennis game of this generation to have all four Grand Slam events – which makes it a game that truly delivers the feeling of competing on the pro circuit. Still, there’s definitely room for improvement; I’d like to see EA Canada try to implement the endorsement deals and other aspects of a pro tennis career that Top Spin has tried in the past.

On the court, Grand Slam Tennis 2 attempts (and largely succeeds) at a complete overhaul of conventional tennis mechanics. The new all-analog control scheme is clearly inspired by what Fight Night has done in the boxing genre. For the most part, it works great. The directional control makes it easy to place your shots, and performing top spin, slice, lobs, and drop shots quickly becomes second nature. After a few matches, I rarely even thought about the control scheme, which is perhaps the highest praise I could give it.

Unfortunately, Grand Slam Tennis 2 has an Achilles’ heel in the form of the AI. Unlike the challenging Top Spin, Grand Slam’s AI opponents are pushovers – even when you face a legend like Pete Sampras. It’s far too easy to recklessly charge the net, using an outdated serve and volley style to sleepwalk to victory. While my matches tightened up in my second complete season, going through an entire year to test your skills is tedious. You can adjust the difficulty level in the frontend options, but even moving up to Pro difficultly didn’t seem to solve the problem. It’s more frustrating because this ease of play is usually accomplished by your opponents failing to play correctly. You’ll see them miss easy shots, get completely out of position, or just flat out not attempt to run down a shot.

While it’s not a perfect product, EA knows how to make deep, full-featured sports games with high production values. In Grand Slam Tennis 2, developer EA Canada applies some of the lessons learned from the company’s other franchises to create a game that excels in many areas while coming up short in a few important ones. 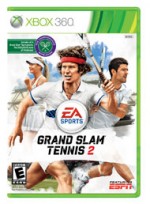 While it’s not a perfect product, EA knows how to make deep, full-featured sports games with high production values.

Purchase More Info
8
i
Game Informer's Review System
Concept Finally unite the four Grand Slam events in one game, while giving tennis the full feature set and TV-style presentation we expect from EA Sports
Graphics The real-life pros are accurately modeled, and the venues and crowds are extremely detailed
Sound Finally, a tennis game worth playing with the sound turned up! John McEnroe and Pat Cash are a great commentating team
Playability I came to like the all-analog control scheme. It’s a shame the difficulty curve and opponent AI is so erratic
Entertainment Grand Slam Tennis 2 is a solid step along the path to the ultimate tennis game – with a little more polish, this franchise could supplant Top Spin as the genre leader
Replay High