Gran Turismo has never been known for its accessibility, but that changes with the franchise’s move to the PSP – and not just because you can take it with you wherever you go. A completely open career structure – if you can still call it that – is one of the changes that shakes this series to its foundation. While that may sound inviting to those who think that’s exactly what Gran Turismo needs, this version’s inability to do the franchise justice is exactly where I think it gets into trouble.

Gran Turismo has never had a scintillating career structure, and by doing away with it entirely, this PSP edition has its advantages. Instead of slowly stringing you along with crap cars and restricting which events you can enter early on, this GT throws its garage doors and track selection wide open from the beginning with an easy flow of credits that makes cars relatively easy to come by. As for the events...what events? Gone are the four-wheel-drive-only contests and other car/model requirements. Now you simply pick a track and car, and then choose whether you want to race in a solo time trial, against three other cars (yes, only four cars per race), or in a drift challenge. Collect your credits after the race, buy a new car, and do it all over again. This is about as sexy as choosing whether you want your potatoes in mashed or fry form. Should you tire of this – and you quickly will – you can always earn credits by completing racing challenges which are akin to the series’ old license tests. I’ve never been a fan of those, so I’m not diving into them now, not even for the easy money.

The game makes itself more accessible in other ways, such as letting friends trade or share cars, multiplayer balancing features such as giving lesser players better cars, random credit jackpots, and the ability for the AI to race for you. But no matter how much these features open up the game, I miss having a bona fide career mode. While I have my criticisms of how dry Gran Turismo’s career modes have been in the past, this GT swings the pendulum too far in the other direction. The game’s lack of focus makes it feel just a step above the demo-like Gran Turismo Prologue series.

This new career mode has its strengths and weaknesses, but the one unfortunate thing about Gran Turismo that seals the deal for me is the driving itself. You’d think GT would have its one calling card dialed in, but it doesn’t. Because of the small degree of movement in the PSP’s triggers and face buttons, the game’s acceleration and braking is very binary – either it feels like you’re not on the pedals at all or you’re slamming them to the car floor. This makes gently braking into corners nearly impossible, and acceleration with high-powered or rear-wheel drive cars can easily devolve into a fishtail-fest. The best I could do was to move the button assignment of the gas and brake to the triggers and then tap them like crazy. The subtleties of braking and acceleration is one of the founding pillars of the entire franchise, and it’s not executed correctly here. The game’s steering is also a little jerky due to the sensitivity setting and limited range of movement of the analog nub.

It’s easy to feel like you’re a kid in the candy store with GT’s open format, but this edition of the franchise has none of the sweet, satisfying racing that has been its hallmark. 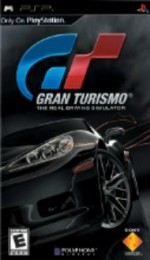 This version’s
inability to do the franchise justice is exactly where it gets
into trouble.

Purchase More Info
7
i
Game Informer's Review System
Concept This game’s structure makes racing easy for casual fans while not alienating hardcore car collectors
Graphics Environmental pop-up is an issue, and the sense of speed isn’t great, but the handheld more or less keeps up with the franchise’s high standards in its own way
Sound The game replicates car sounds with a good fidelity, retaining the authenticity of the series. There is also a cheesy announcer who is thankfully used sparingly
Playability I couldn’t find a control setup I liked because the buttons on the PSP aren’t capable of subtlety in braking or accelerating
Entertainment Gran Turismo’s open format will please many, but this handheld just can’t handle the sim-racing this series demands
Replay Moderately High