Still Not The GoldenEye Remake Fans Were Hoping For
by Jeff Marchiafava on Nov 01, 2011 at 12:40 PM
Publisher: Activision
Developer: Eurocom
Release: November 1, 2011
Rating: Teen
Reviewed on: Xbox 360
Also on: PlayStation 3 Last year Activision released GoldenEye 007 exclusively on Wii in hopes of recapturing the love and excitement Nintendo fans felt for the original N64 title with a modern remake. Ultimately, the new GoldenEye 007 suffered from problems familiar to most FPS Wii titles: clumsy motion control implementation, fuzzy graphics, and subpar online support. Activision succeeded in fixing these shortcomings with GoldenEye 007: Reloaded, but it only highlights the larger dilemma facing this re-imagining: It's not the GoldenEye you loved, and as an unrelated title, it pales in comparison to other shooters on the market.

There's a way to update a beloved title for an HD console, and then there's the way Reloaded does it. Most HD remakes port the old game people know and love into a new engine and sprinkle in a healthy dose of improvements and fan service. Instead, developer Eurocom tried to create a modern shooter from scratch that remains faithful to GoldenEye's aged story and level structure. The result is a game that feels unpleasantly dated, while simultaneously lacking the nostalgia it tries so hard to cash in on. Like a bad dream based on the events of the previous day, Reloaded only vaguely resembles the GoldenEye you remember. You'll recognize plot points, character names, and locations in the single-player campaign, but won't feel like you're reliving precious memories from the N64's glory days. The HD graphics are a welcome improvement over the Wii version, but the level design betrays its original platform, as the environments lack the depth or scale expected from modern shooters.

Multiplayer was a major component to GoldenEye's popularity, but Eurocom's wholesale revision leaves little of the classic formula intact. A few multiplayer modes, weapons, and levels carry over to Reloaded, but don't expect your knowledge of the layout of the original Facility and Archives maps to come in handy.

Multiplayer gameplay now feels like a slow take on Call of Duty, which isn't surprising, considering the adoption of regenerating health (which can be turned off), a perk system, and customized loadouts. Loadouts create the biggest schism between the old and new GoldenEye, as players no longer vie for weapons placed around the map – instead you're relegated to whatever weapon you choose to spawn with or pick up from a dead opponent. These differences aren't inherently bad, but they won't appease GoldenEye fans, and CoD fans have better alternatives on the market. Eurocom did embrace other aspects of the original GoldenEye, including the use of Bond villains in multiplayer, which now sport unique stat boosts and abilities to great effect. The game features a wide array of classic and new multiplayer modes, which you can configure to your liking and apply ridiculous modifiers to. I also give props to Eurocom for including 4-player splitscreen multiplayer, and even if it doesn't fully capture what made the original GoldenEye so addictive, it's still fun with the right crowd.

Considering all of the extras Eurocom added to Reloaded, I have no doubt the developer tried to make the definitive version of a modern day GoldenEye. However, I still feel like I would've been happier playing a $10 downloadable HD remake of the original game, similar to last year's XBLA release of Perfect Dark. GoldenEye 007: Reloaded still entertains, but stripped of its nostalgia, it fails to reach the status of an elite agent. 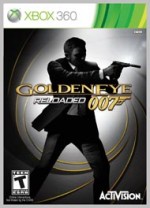 GoldenEye 007: Reloaded still entertains, but stripped of its nostalgia, it fails to reach the status of an elite agent.

7
i
Game Informer's Review System
Concept Bring the Wii's recent GoldenEye remake to consoles that support HD graphics, normal controllers, and competent online networks
Graphics The HD graphics are an obvious improvement, but the levels are so basic that they still fail to impress
Sound Gun sounds are hit or miss, as is the voice acting
Playability Exactly what you've come to expect from a modern FPS. The limited sprint is annoying
Entertainment Reloaded is a decent shooter, but contains little of what made the original so entertaining
Replay Moderate