I probably can’t tell you much about the first two God of War games that you don’t already know. As soon the series burst onto the scene in 2005, it transformed the action genre and established Kratos as one of the gaming industry’s biggest power players. The original featured brutal combos and huge foes that redefined the phrase “epic battles” for the era, while the sequel cemented that legacy and pushed the technical capabilities of the PS2 to the limit. When taken alone, each of the two God of War games are amazing achievements. When compiled onto a single disc, they form a package that every PlayStation 3 owner should own.

The God of War Collection includes both of the series’ PS2 iterations in their entirety, but they haven’t been unceremoniously dumped onto a Blu-ray. The games have undergone some visual improvements to make them look even better than before. When I go back to play an older game, I’m sometimes surprised how the harsh reality of the visuals are at odds with my memory. That doesn’t happen here; this collection makes these games look like you remember them, not how they would actually look if you plugged in your PS2. I can’t exactly say that the graphics have been updated, but they have been optimized for HD and given a silky smooth framerate that would put plenty of current-gen titles to shame.

For fans that need an incentive to revisit these masterpieces, each one has a full list of trophies rewarding your accomplishments. However, apart from the included God of War III demo, don’t expect anything in terms of new content. Thankfully, the old stuff is still good – the combat feels familiar without getting stale, and the visuals are classic but not outdated. Only cutscenes using the in-game engine stand out as strange; they weren’t redone to fit with the new crisp and clean graphics, resulting in grainy and terrible-looking breaks in the action, particularly in the first God of War.

Ultimately, this collection isn’t much more than the sum of its parts, but that is hardly a bad thing considering the quality of the parts. If you still haven’t played the God of War series, you aren’t just missing out on great games. You’re missing pieces of gaming history. 9.5
About Game Informer's review system
Concept
One disc, two games, and countless mutilations
Graphics
The refined graphics look great – you’ll have trouble believing these were originally PS2 games
Sound
Yep. Still awesome
Playability
Gaming has evolved since these titles originally released, but they hold up incredibly well
Entertainment
Combat is as fun and fluid as ever, and violently executing mythical beasts still sends a tingle down my spine
Replay
Moderately High 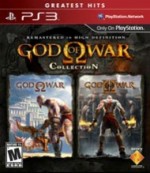