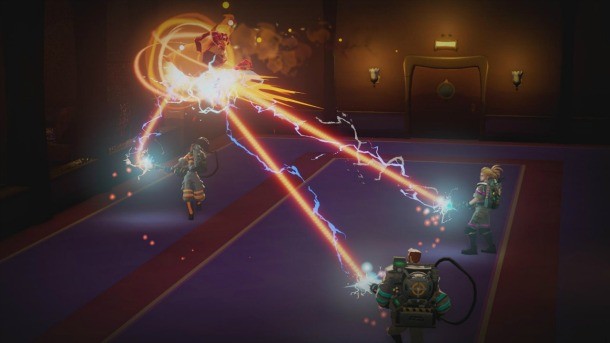 As I slowly enter the dimly-lit room on the abandoned ship, my P.K.E. meter begins picking up paranormal presences. My ragtag team of rookie Ghostbusters readies their weapons as flaming skulls circle around them and the spirit of the dead captain emerges. Using our primary weapons, we wrestle his health down before firing out our proton streams until he's tired enough to catch in our ghost trap. Rather than celebrating with a triumphant fist-pump, I let out a quiet sigh and move on to the next room where I face the same enemies and follow a nearly identical series of events. That's because this twin-stick shooter interpretation of the Ghostbusters license not only reuses its environments, enemies, and dialogue ad nauseam, but even its encounters are staged in similar ways from beginning to end.

Each level in Ghostbusters is a linear path that repeats the same formula: Four main characters (controlled by humans in local co-op or A.I. otherwise) fight large numbers of smaller apparitions, scan an area with the P.K.E. meter, then battle a mini-boss in a large open area until they capture it. Most missions take around 30 minutes and have you repeat this process several times before you finally face off against the stage boss. As if that isn't repetitive enough, you must do that in 10 missions across six locales (excluding the unlockable "remix" missions that let you return to alternate versions of previous levels - not that you would ever want to).

The environments possess a colorful art style that would be a lot more impressive if I didn't pass through the same recycled hallways and rooms. The enemies are also reused; if you're not fighting hordes of flaming skulls, it's flocks of flying books. If it's not the spirits of those buried in the cemetery you're walking in, it's the spirits of patients at the asylum you're exploring.

The boss battles at the end of each stage are the most diverse, but even most of those devolve into simple bullet-sponge encounters with few surprises. During many of these encounters, I was able to easily knock off large chunks of health by standing still and firing at the boss, or by doing circles while shooting at it. The boss battles aren't great the first time around, which made the final level, which has you fight them all again back-to-back in the lead-up to the anticlimactic final boss, all the more annoying.

Rather than using the cast of the first two Ghostbusters films or even the cast of the film this release coincides with, the game introduces four original characters. Each character represents a different class; you can choose from a guy wielding an assault rifle proton pack, a girl with dual pistols, a guy with a heavy chain gun, and my personal favorite, a girl with a shotgun. I refer to them like that because while they possess distinct abilities, they are left unnamed by the developer.

The characters don't have names, but they do each have unique personalities, as demonstrated by the horrible one-liners that are repeatedly spewed throughout each mission. Ghost-related puns like "I see right through you," "He's sprite this way," and "I've got the spirit" made me not even want to think about the lines that were left on the cutting room floor.

At the end of each mission, you're awarded experience points to level up your character's stats. While I often poured my points into weapon damage or movement speed, you can also increase the range of your weapon, the size of your health bar, and more. I enjoyed leveling my favorite character up, but since experience gained doesn't transfer between characters, you're better off progressing with a single character, which defeats the point of the diversity offered by the different classes.

The overall lack of polish is another issue. Enemies get stuck in the environments, weapons inconsistently go through periods of being unable to fire when you're revived, and companion characters sometimes teleport short distances while you're walking with them. In addition, the underwhelming sound of the weapons is even further highlighted when the sound doesn't play properly because another weapon is being fired at the same time. When combined with a chugging frame rate and other problems, these flaws push Ghostbusters further into the realm of unplayability.

The tedium of playing through the same encounters over and over again makes Ghostbusters impossible to recommend. The awful one-liners, the poor sound design, and the boring story would be tolerable if it was fun to play, but it's not. Ghostbusters is a slog from start to finish. 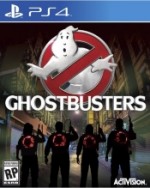 Ghostbusters stars an original cast on a journey that's a slog from start to finish.

Purchase More Info
4
i
Game Informer's Review System
Concept Guide a group of unnamed rookie Ghostbusters through events taking place after the 2016 film
Graphics The colorful art style is one of the few high points, but the environments and enemies are heavily recycled
Sound When you aren’t enduring some of the worst one-liners, you’re listening to Ray Parker Jr.’s “Ghostbuster’s Theme” on loop
Playability The game possesses virtually no learning curve which is good for accessibility, but bad for depth and challenge
Entertainment A repetitive experience that somehow makes hunting down ghoulish spirits dull
Replay Low