Geometry Wars 3: Dimensions is a finely honed twin stick shooter that delivers a symphony of chaos with its vibrant explosions and incomprehensible number of enemy ships swarming the screen. Holding true to this series' heritage, it has no sympathy for the player, delivering a punishing difficulty in all of its challenges. The "Game Over" screen can come within seconds of play, but the push to top a friend's score on the leaderboards makes it one of most rewarding bragging rights games around.

Dimensions expands this series' thrills in a multitude of ways, the most prominent and successful being the adoption of multi-dimensional level designs. Most of the stages are three-dimensional constructs, like cubes, spheres, and cylinders, that the player can freely navigate. Since the player can't see what types of enemies are spawning on the dark sides of a cube, these stages add difficulty to the mix, creating blind spots and numerous battle surfaces that must be cleared. Most of these stages push the player to deploy different tactics, whether it's more conservative attack patterns for the smaller cube surfaces, or different companion ships and powers to better handle the blind spawns.

Unfortunately, not all of the punishing aspects of the new dimensional play are welcome in this experience. In the game's version of Adventure mode, which offers a variety of level-based challenges similar to the Wii game, Geometry Wars: Galaxies, players are pushed to score well and survive long enough to earn stars that unlock boss battles. Given how difficult the stages are to begin with - many rank as the toughest in the series - blocking player progression with this star system is an odd choice. Yes, pushing players to go back and play the same levels over and over again extends the length of Adventure mode, but it also means repeating stages that are not favored or may be too challenging. The difficulty (and the pursuit of stars) ramps up the most in the boss battles, a first for this series. The idea of taking on a giant enemy ship may sound awesome in concept for Geometry Wars, but they are more strenuous than fun, especially when attempting to net two- or three-star rankings, which is likely need to unlock the final stages. The bosses are all designed the same, too, as giant, shielded entities that must be dealt with as enemy waves protect it. With only one life to work with, the player's focus is split between attacking the vessel and collecting enough multipliers from the smaller fighters to achieve higher scores. Yes, these battles can be thrilling at times, but I found them to be maddening for star-collecting purposes. With the player's attention having to be applied to the boss in timed sequences, these stages also lose that smooth Geometry Wars flow, and are a bit more chaotic in play.

Adventure mode, for all of its structural problems, is also home to some of my favorite stages in Geometry Wars history, such as a wonderful 10-minute Retro Evolved marathon, and a spherical onslaught against giant, exploding versions of the typical enemy types. I also love the new Sniper missions, which push the player to excel with a finite number of bullets. Another nice touch is the leveling up system, in which experience points are rewarded through play, and cashed in to upgrade the ship's capabilities, and purchase powerful weapons for its tiny companion vessel. The homing missile upgrade is a little overpowered, but it is fun to use when maneuvering spaces are limited. Being able to switch to magnetism is another helpful way of upping the multiplier for tougher, single-life stages.

A short cooperative-based campaign is offered for up to four-players, but it is balanced for the larger group, making it overly difficult for just two players to achieve high scores, or even stand a chance against the final boss. Plenty of hours of excitement are packed into the game's multitude of modes, but I have a feeling most people will sink their time into the classic Retro Evolved mode, which is fantastic in this installment.

Developer Lucid Games has a firm handle on Geometry Wars' twin stick action, but sometimes struggles to put it to good use. The star-based progression system is a head-scratcher of a decision, as it likely blocks the majority of players, and is strictly there to give skilled players a real run for their money. 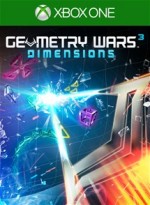 Geometry Wars 3: Dimensions is a finely honed twin stick shooter
that delivers a symphony of chaos with its vibrant explosions and
incomprehensible number of enemy ships swarming the screen.

Purchase More Info
8
i
Game Informer's Review System
Concept A continuation that builds off of Retro Evolved and Galaxies' successes, but misfires frequently in its progression system and boss battles
Graphics Colorful, chaotic, and exactly the same as it has always been. The new three-dimensional stage designs are successful in upping the challenge and giving players something different to look at
Sound One of my favorite soundtracks of the year. The pounding beats and arrangements fit the mayhem and calm before the storm
Playability The controls feel fantastic, and the new power-ups open up strategic options, but the bosses don't jive well with the existing formula
Entertainment One of those experiences that I would call addictive in that "just one more attempt" way
Replay High