Epic’s newest installment in the massively successful Gears of War series is surprising in many ways. Baird has stepped up from side character to starring role. The popular Horde mode has essentially been replaced with new multiplayer experiences. No matter how many tweaks Epic made to this prequel, it still manages to unmistakably feel like Gears of War.

A co-op story mode is nothing new to the Gears franchise, but Judgment brings major changes to the campaign experience. Most of the changes are relegated to the gameplay, but the narrative is structured in a new way as well. Instead of telling a linear, straightforward story, the entirety of campaign is told via flashbacks as Baird and Kilo Squad describe previous events during a military trial.

Gears has never had masterful storytelling, and narrative clearly takes a backseat in Judgment’s cooperative campaign. Instead, this entry focuses on the series’ greatest strength – loud, violent, intense shootouts. Epic breaks sections of the campaign up into digestible, standalone battles as frequently as possible. Instead of feeling like you’re following a story from beginning to end, Judgment instead shuttles you from skirmish to skirmish with nothing to break up the action. Enemies come in massive waves, and you’re rarely given a moment to relax. If you’re looking for a game that you can jump into and immediately start ripping enemies to shreds with high-powered weaponry, few games scratch that itch like this one.

While this is satisfying on one level, it comes at the sacrifice of memorable set piece moments. I have fond memories from the previous games of exploring the innards of a giant Riftworm, riding on the back of Rig 314, running from streetlight to streetlight to avoid Kryll, fighting a Brumak, and being introduced to the Lambent. I enjoyed the more traditional action of Judgment, but looking back, the campaign is a foggy mess of explosions and bullets with no standout moments.

An epilogue chapter named Aftermath unlocks as you progress through the campaign, and it takes place during the timeframe of Gears of War 3. Without the rigid structure of the main campaign, it feels like a more seamless experience and manages to squeeze in some setpiece moments. Even though it only takes about an hour to play it, a few of the scenes reminded me of how much more I enjoyed the older format.

The campaign may be more fragmented now, but it does have its advantages. Rating your mission-to-mission performance on a three-star system and offering extra difficult “declassified” modifiers makes the campaign more replayable, and it’s easy to jump straight to a section that you want to play over.

As always, the Gears multiplayer suite rivals anything else on the shooter market. Horde and Beast modes are technically gone, but the new marquee Overrun mode takes the best elements of both and turns it into the best multiplayer experience in the franchise’s history. Defending emergence holes and generators as the COG is intense and challenging, and taking control of various Locust creatures is a blast. This mode is unlike any other, and it should keep shooter fans coming back for months.

If you can pry yourself away from Overrun for long enough, the new survival mode’s COG vs. A.I. gameplay conjures a bit of the old Horde spirit. Defending generators against ten waves of computer-controlled Locust may not match the scale of Horde, but it’s a nice inclusion nevertheless. Standard offerings like free for all, team deathmatch, and domination are also available if you’re looking for a classic online shooter experience.

Despite its questionable approach to the campaign that abandons huge set piece moments in favor of smaller skirmishes, Gears of War: Judgment remains a polished, replayable experience. Even if you never touch any future DLC, the game disc has enough content to keep you busy for the better part of 2013. Judgment is likely the final Gears game in this console generation, and the timing couldn’t be more fitting. As a franchise whose debut helped establish the Xbox 360’s identity, it bids farewell to this generation with an installment that benefits from the iteration and improvement that its predecessors provided.

8.5
About Game Informer's review system
Concept
Take a step back in time with Baird for the campaign, and pit COG vs. Locust in the fantastic new Overrun multiplayer mode
Graphics
Everything looks great, but nothing that puts Judgment head and shoulders above its predecessors
Sound
Weapons sound fantastic and dialogue is appropriately ham-fisted
Playability
As the fourth entry in the series that’s always had good controls, you won’t find much to complain about here
Entertainment
A great farewell to a series that helped establish the identity of the Xbox 360
Replay
High 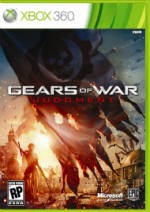