Amongst the glut of sexy trivia games and Minecraft knock-offs that plague the Xbox Live Indie Games portal, an occasional gem shines through. Gateways is one such game, aptly translating the spatial puzzles of Valve's hit Portal into a 2D environment. If you think that axing the third dimension would neuter the challenge of Portal's space-jumping puzzles, fear not; a trio of other portal guns transforms the formula in more mind-blowing ways than Valve's own sequel.

Gateways gets off to an underwhelming start, in part due to its primitive presentation. The graphics, animations, and sound effects are all basic, and the story is virtually nonexistent. You play the role of Ed, a scientist who must find a way out of his sprawling laboratory, which is split up into Metroid-style branches that open up as you gain more powers.

Most of the puzzles involve opening doors via a series of switches or sensors, and those built for the first gun are easy for Portal veterans. Luckily, each of the three subsequent guns you unlock adds new and unique twists to the formula. The size portal gun allows you to shrink or enlarge your character, the time portal gun lets you travel back in time and coordinate your actions with your previous self, and the gravity portal gun has you flipping the world around. These new abilities have you crisscrossing your laboratory as you figure out previously impassible puzzles. Remember that pressure plate on the ceiling you couldn't reach? Use the gravity gun to flip your world upside-down and stroll right up to it. Couldn't figure out how to split a laser to activate two sensors at the same time? Shine it through a time portal, then jump in after it and use your clone to aim the second beam. Find a door with four pressure plates? Repeatedly jump back through your time portal until you have a quartet of clones to hold the door open for you – just make sure you don't bump into your copies, or you'll rip the fabric of space-time and collapse the portal.

Just when I figured out all of my powers, the game switched things up one final time; the last power-up gives you the ability to use multiple portal guns at the same time. Gateways becomes awesomely challenging at this point, and the last few puzzles are a mental marathon, requiring you to set up eight different portals simultaneously and orchestrate your movements across an army of clones. One puzzle requires you to shrink yourself down, then jump through a gravity portal and run up a wall to trigger a miniature switch – then enlarge yourself and hightail it back to the time portal before it closes to create another clone for the next step in the solution. These are the kinds of mind-expanding challenges I had hoped to see in Portal 2.

As much as I love Gateways, I have a few complaints. I never really got used to the disorienting preview effect portals cast, and despite a network of shortcuts, I still spent a lot of time backtracking to puzzles I couldn't complete earlier in the game. Gateways also features only one real enemy type (floating contraptions that you jump on to defeat), and they're rarely ever incorporated into the puzzles. Instead, they're meant to spice up the occasional platforming sections, but they don't help much. Thankfully, platforming isn't the point.

My biggest complaint, however, is that Gateways eventually ends. While the length of the game is perfectly acceptable (it took me about six hours), I would've gladly stumbled my way through countless more puzzles. This addictive and rewarding gameplay makes recommending Gateways a no-brainer. 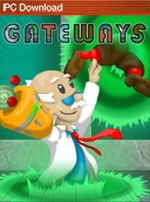 Amongst the glut of sexy trivia games and Minecraft knock-offs that plague the Xbox Live Indie Games portal, an occasional gem shines through. Gateways is one such game, aptly translating the spatial puzzles of Valve's hit Portal into a 2D environment.

Purchase More Info
9
i
Game Informer's Review System
Concept Make a 2D Portal game featuring a number of extra, mind-bending guns
Graphics The visuals are extremely simple, but they are charming
Sound While the sound effects are forgettable, the soundtrack grew on me
Playability The controls are on par with any 2D platformer, and aiming portals is a cinch
Entertainment I was taken aback by how complex, challenging, and rewarding Gateways' puzzles are
Replay Moderate