The setting for A Song of Ice and Fire by George R.R. Martin (and its accompanying HBO series, Game of Thrones) is bleak. Betrayal, murder, and underhanded scheming are major components of the franchise’s winning formula. These themes make Westeros an intriguing and dangerous place, a fact that is accurately reflected in this RPG from Cyanide Studios. Unfortunately, the rest of the experience is littered with technical and design issues so frustrating that they must have come from the unhinged mind of Mad King Aerys II. Like the Mad King’s reign, this spin on Martin’s fiction is ruinous for Westeros.

Similar to the point-of-view characters in the novels, the narrative in Game of Thrones is split into chapters, and control alternates between two protagonists. Alester is a red priest returned from a 15-year exile in the east, and Mors is a skinchanger in the Night’s Watch. Though the two plotlines are initially unconnected, each story arc is full of interesting developments and surprising twists, making their eventual convergence satisfying. The structure mimics the books’ appeal well, switching characters at moments of high tension and leaving you excited to pick up the thread later. Since the overall plot is the only thing the game has going for it, I won’t reveal specifics except to say that the tale is exceedingly grim – even more hopeless than the novels. The events take place parallel to the first book and the show’s first season, so you don’t need to worry about any series spoilers if you’ve gotten that far in ­either ­form.

Martin himself collaborated with Cyanide to create the story, but given the poor quality of the individual scenes, I’m guessing the author’s involvement stopped at a high-level conceptual phase. The dialogue is standard fantasy fare, devoid of personality and made worse by stilted voice performances. As if that weren’t enough to drain away the drama, bad animation and serious technical problems distract from scenes that are supposed to be climactic. Seeing characters phase through walls, appear out of thin air, or wordlessly open and close their mouths  transmutes any potential emotional impact into unintentional humor – an unforgiveable problem when you’re trying to tell a grim, dark ­fantasy ­tale.

The situation doesn’t improve on the battlefield. Combat plays similarly to the console version of Dragon Age: Origins, but with less polish (and remember Origins on consoles was already sloppy). You set up actions in a three-slot queue, then watch your commands get carried out in sequence. Apart from your basic attack, no abilities are mapped to any face buttons, so you frequently need to pause (though the action doesn’t stop entirely) and pull up an ability wheel to issue new orders. Your powers are cool, especially those involving Mors’ dog and Alester’s affinity for fire, but the stop-and-go feeling keeps fights from gaining momentum.

Even when you win, you won’t get any tactical satisfaction. Every enemy in the game is just a dude in some armor (with a single late-game exception), and they aren’t military geniuses. Archers often attack at point-blank range, stupidly trying to fire arrows while flanked by swordsmen. Guards stand oblivious while their comrades are slaughtered in huge battles only feet away. You can usually cruise through fights against these idiots without a problem, but the difficulty can spike unexpectedly, overwhelming you and leaving you with no way to grind out a few extra levels. In these instances, it helps to adjust the difficulty on the fly to survive the poorly balanced fights.

In many RPGs, good rewards can soothe the sting of an uneven battle system. That doesn’t happen in Game of Thrones. Nearly all of the good items from shops are unattainably expensive until the game is practically over, leaving you to scavenge for gear suited to your particular armor and weapon specialties. Leveling your characters isn’t much fun, either. The attribute and skill system only bestow imperceptible bonuses (like raising your hit chance from 84.7 percent to 86.1 percent), meaning that you rarely have a sense of your characters’ growing power.

At its worst, Game of Thrones is difficult to tolerate, but the burden of its many problems isn’t enough to render the experience worthless. For those already familiar with the franchise, the story of Mors and Alester is consistent with the world and provides insight into events beyond the reach of the regular series cast. However, you must be a forgiving and devoted fan to enjoy the best that this game can offer. Otherwise, you’re better off following the words of Genna Lannister: “Better to mock the game than to play and lose."

Do I Know You?
If you watch HBO’s Game of Thrones, you’ll recognize a few faces; the likenesses of Jeor Mormont, Varys, and Cersei appear in the game. Other characters are conspicuously absent from the events (is it better to have no Robert Baratheon or Jon Snow than unfamiliar ones?), but at least the game doesn’t try to shoehorn inappropriate characters into the story just for the sake of fan service. Unless you count the maester modeled after George R. R. Martin.
Off
On
Off 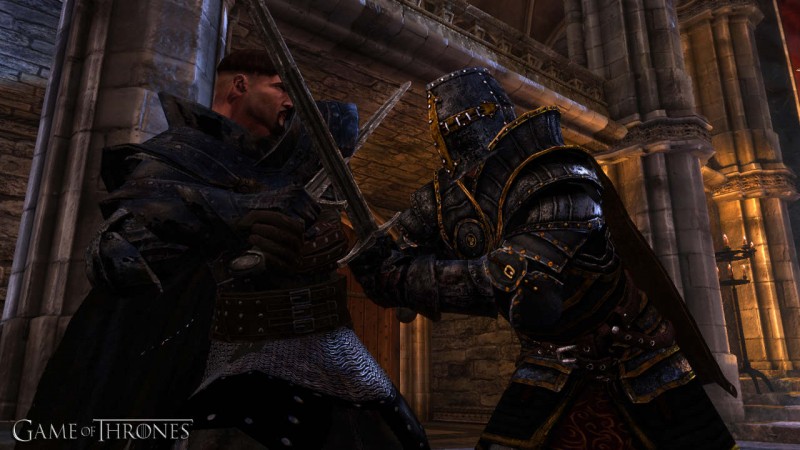 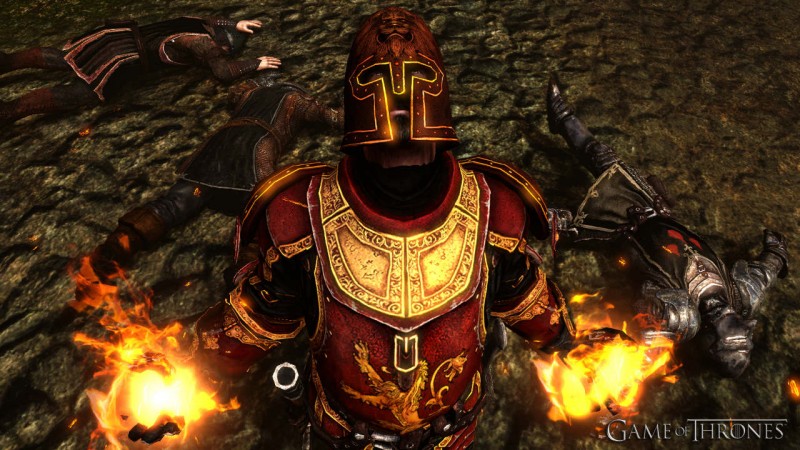 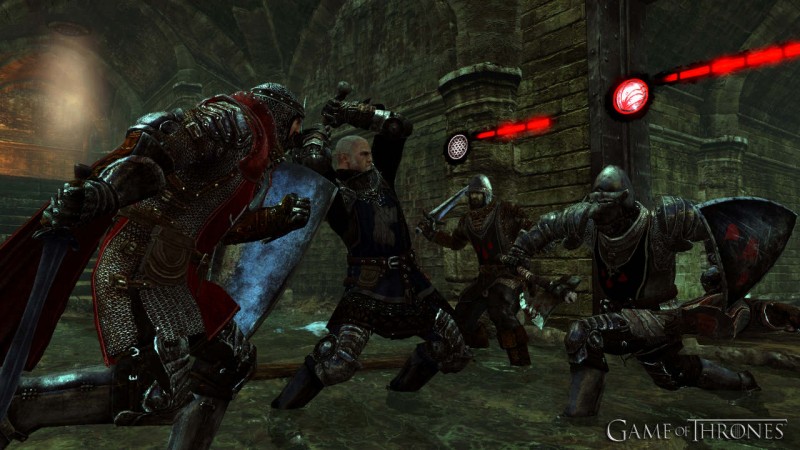 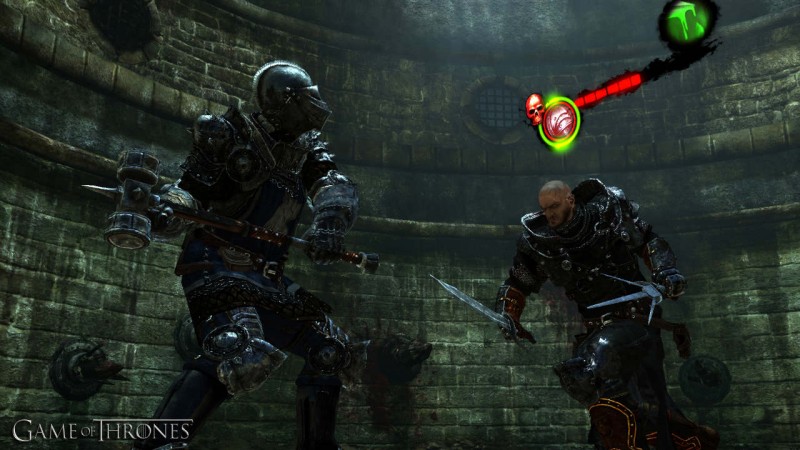 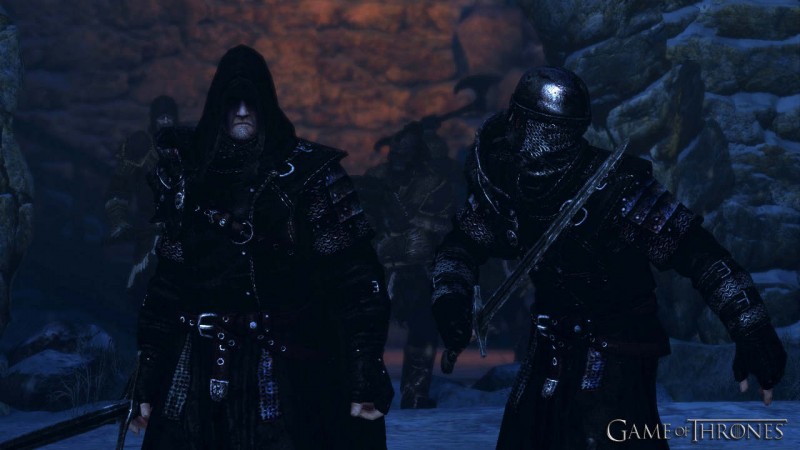 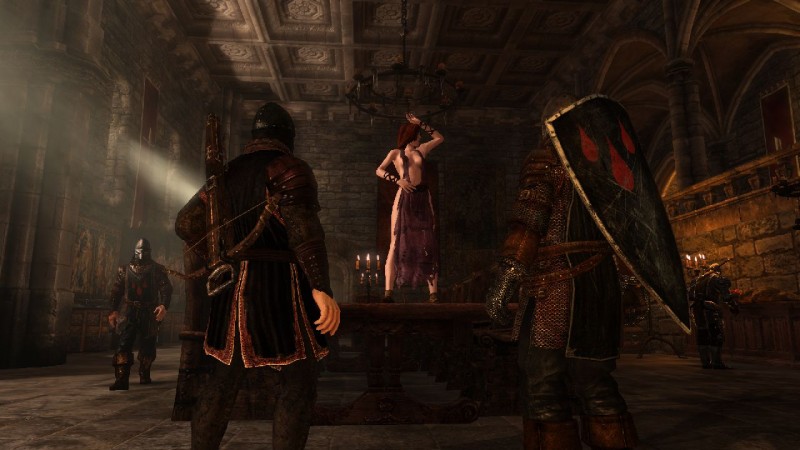 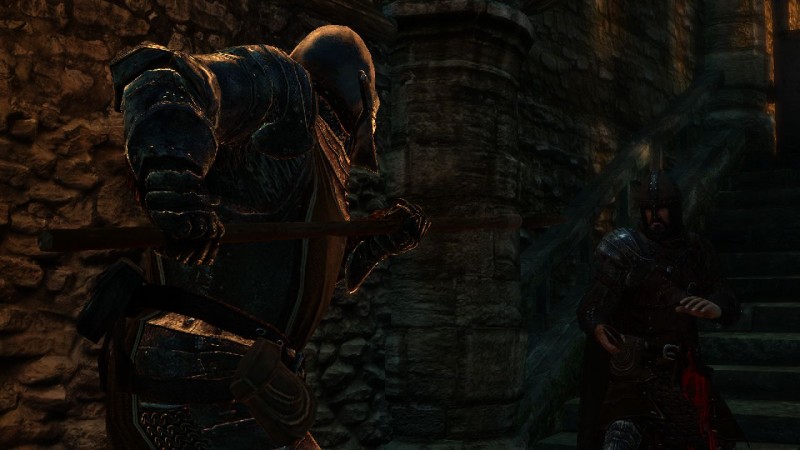 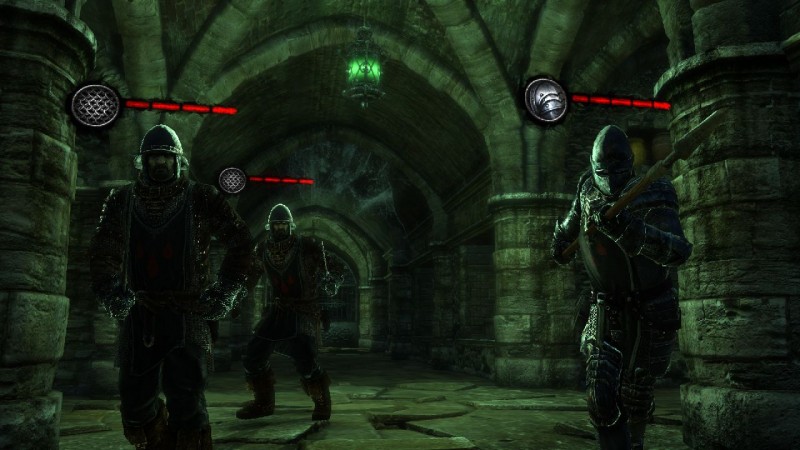 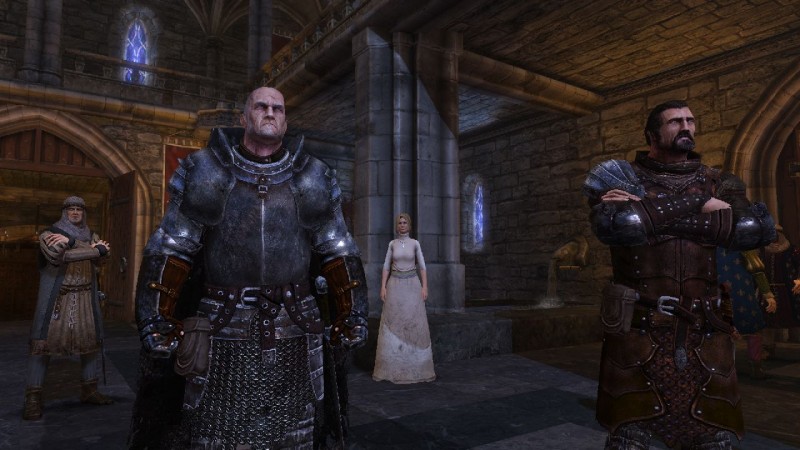 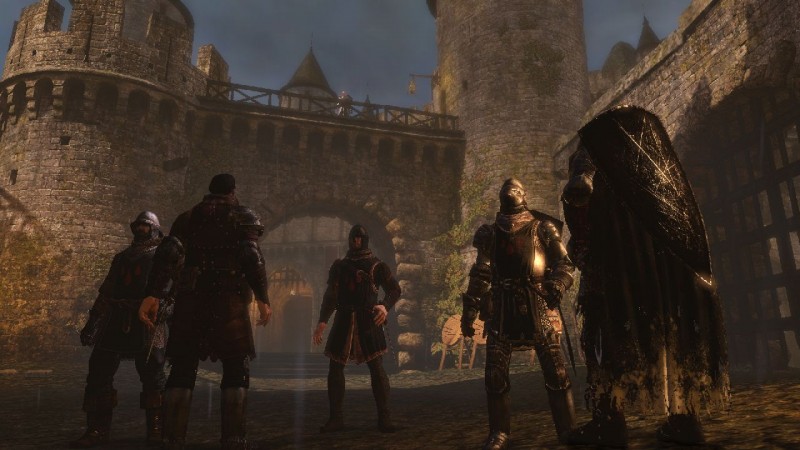 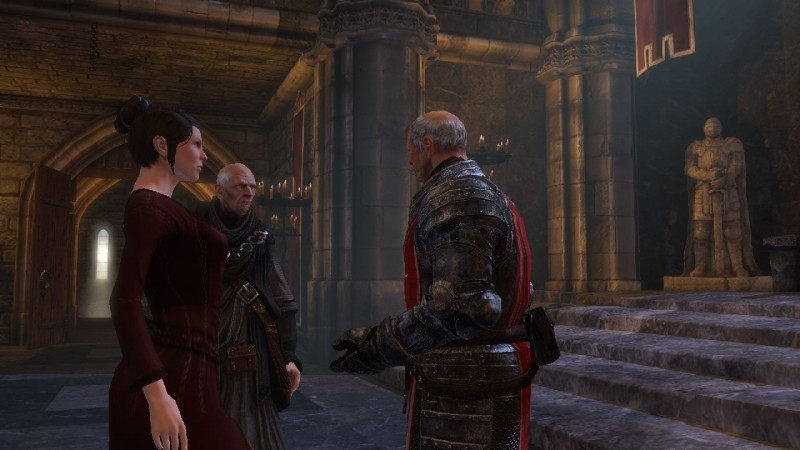 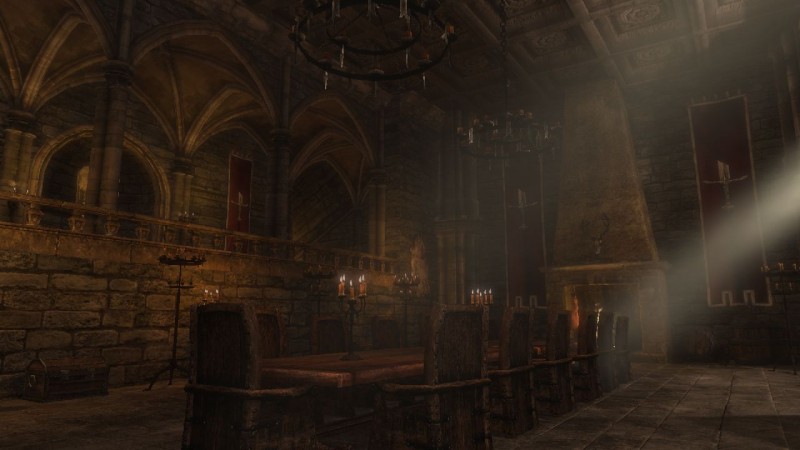 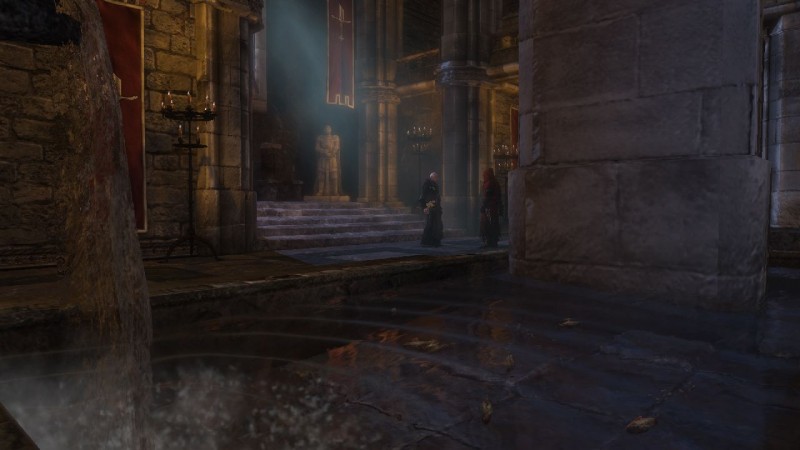 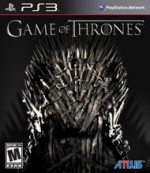 The technical and design issues in this RPG must have sprung from the unhinged mind of Mad King Aerys II.

Purchase More Info
6
i
Game Informer's Review System
Concept An RPG revealing an untold story in George R.R. Martin’s rich fantasy world
Graphics There’s no kind way to say it. From textures to character models, no part of this game looks good
Sound The awesome theme from the TV show is here. So is painfully wooden voice acting
Playability Combat is clunky, due largely to the constant need to pull up an ability wheel
Entertainment Enjoying the story requires a high tolerance for boring combat, unsatisfying character development, and pervasive technical issues
Replay Low