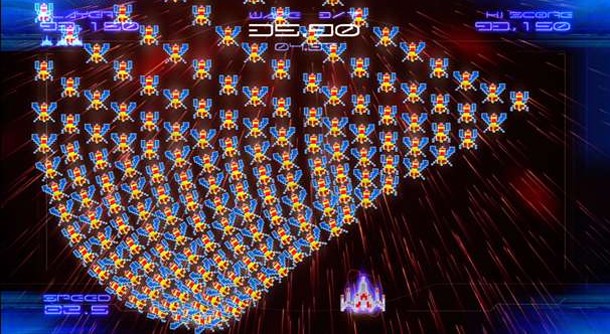 With Pac-Man Championship Edition DX, Namco managed to make Pac-Man seem entirely fresh while maintaining the series’ classic elements. Galaga Legions DX, on the other hand, plays like a completely different game than its namesake. Rather than tapping the shoot button repeatedly to take on predictable, slow-moving waves of enemies, Legions DX has you fighting back a seemingly never-ending armada of thousands of enemy ships.

Championship mode is your first option, but there are also nine different areas with a similar set of rules. Each of these has you battling through four levels of varying wave length, and each level has a timer. Beat a level with 20 seconds remaining, and you’ll bank an additional 20 seconds to spend in the fifth level that awards double points. Most of the standard areas are between five and 15 waves, but the lucrative final level can go up to 99 depending on how much time you’ve saved up.

At no point do the enemies behave as predictably as they did in the original Galaga (sitting up top, waiting their turn to attack as you move left and right below them). These fleets will arrive as rotating masses, dense walls, or exploding hazards. In almost every wave, you’ll find Galaga bombs. These are enemies that explode when shot, taking out any others in the vicinity. They’re great for getting through levels quickly, but enemies killed in the chain reaction explosions only reward half points. You’ll constantly have to weigh your options -- that Galaga bomb will get you through the level quicker and let you spend more time in level five, but they’ll also rob you of the points you’d receive if you took out the minions directly.

Your ship is allowed full freedom of movement, allowing you to burrow through waves of enemies in a similar fashion as Geometry Wars. It’s extremely important to keep moving and attacking the enemy from various angles, otherwise you’re bound to get blindsided by a stray enemy or ship.

If you shoot a vortex-like Galaga trap, it will suck in any nearby enemies and add them to your side. These can all be controlled via the right stick, meaning you could go from three cannons (yourself and your two satellites) to over a dozen. It’s a great feeling, and pummelling oncoming waves with tons of cannons simultaneously is a thrill not seen before in the series. Your shots can either be focused in either one or separate directions, but you’ll usually opt for the former. Outside of a few circumstances that feature exploding enemies coming in from all sides, you’ll want to use the straight-on shot so you can focus your attack squarely on your target.

Pac-Man DX offered a thrill when you’d eat dozens of ghosts in one high-scoring run, and Legions DX presents a similar feeling when you’re mowing down a gigantic, rotating mass of enemy ships. It’s also an experience that’s better to play than read about in a review. I can rave about it all I want here, but encountering a seemingly-impenetrable wall of enemies and blasting through them will tell you more about the game than I ever could. It’s a fantastic addition to XBLA and PSN, and it’s a great way to celebrate the 30th anniversary of Galaga.

Rather than tapping the shoot button repeatedly to take on the original's predictable,
slow-moving waves of enemies, Legions DX has you fighting back a
seemingly never-ending armada of thousands of enemy ships.

Purchase More Info
8.5
i
Game Informer's Review System
Concept Galaga in name, but more Geometry Wars in execution
Graphics A constant barrage of ships, missiles, and explosions
Sound Fast-paced retro music in the same vein as Pac-Man DX
Playability Controls are simple and easy to learn, and gameplay relies on pure instinct
Entertainment One of those great shooters that makes you afraid to blink
Replay Moderately High