Building on the strong foundation of an existing game is an art in its own right, especially when the game in question is as intricately balanced and geared for difficulty as FTL. Subset Games has returned to its starship simulator with an eye towards small additions rather than rewriting the fundamentals. New weapons, story encounters, and even a new alien race add challenges and strategies to your trek through space. This polished mobile version is a fantastic addition to the iOS library; the game carries both the intense thrills and frustrating potential for loss that characterized the original – now with a smartly built touch interface.

FTL puts you in control of a spaceship on a desperate mission to cross outer space and warn your allies of an impending attack, even as the assaulting force sweeps through behind you. The crushing wave of enemy ships adds a sense of urgency to the roguelike experience, and the need to upgrade along your journey provides constant hard choices. I love the many ship templates and development paths that FTL allows. However, like in the original, it can be incredibly frustrating to see your well-conceived upgrade plan fall apart because of an arbitrary bad encounter.

The new Advanced Edition features can be turned on or off before you start a game, and a few playthroughs one way or the other will help determine which version you prefer. The new content adds complexity that is best for players already familiar with FTL’s many eccentricities. New offensive ship systems, like hacking and mind control, give you and your enemies surprising ways to turn a battle around. The clone bay offers a compelling alternative to the standard med bay; you sacrifice healing capability for the option to effectively bring crewmembers back from the dead. We’re also introduced to the enigmatic metallic Lanius aliens, which are found in new abandoned sectors across the map. Their ability to suck oxygen out of the room makes for particularly confounding confrontations. Finally, this new edition adds several new story encounters interspersed amid the existing ones, helping to add some fresh decisions for seasoned players.

The touch controls are excellently implemented, and take only a few encounters to fully grasp. Ship systems are powered or depowered by moving your finger up and down a slider, while moving crew and firing weapons are straightforward taps. The screen ratio width is different on iPad than most computers, and the developers have solved the problem by letting you tap to zoom in on your ship or the enemy’s.

Since its original PC release in 2012, FTL has distilled the sci-fi starship fantasy down to its core experience in a creative and addictive way. The extreme difficulty of the game can make for a frustrating first few attempts, and it’s too bad the “easy” mode isn’t more inviting to newcomers. I also wish Subset had chosen to rethink its approach to the final boss fight – a confrontation that feels out of character from the rest of the game, with only a few consistently reliable strategies for victory. Even so, FTL is richly imagined and hard to put down, and an impressively deep and complex game for the iOS platform.

This review pertains to the iPad version of FTL. The new Advanced Edition features are also available for free to download to anyone who owns the original PC version of the game. 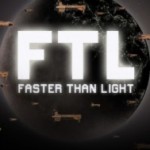 An excellent port brings Subset Games' spaceship simulator to the tablet for the first time.

Purchase More Info
8.25
i
Game Informer's Review System
Concept Build a ship and crew as you flee across the cosmos, fighting enemy starships as you go
Graphics The art is simple, and the U.I. capably presents much-needed info
Sound The music and sound effects match the classic sci-fi staples to which the game pays homage
Playability Smartly implemented touch controls, but little in the way of tutorials. You have to learn on your own
Entertainment An imaginative science-fiction adventure for patient players looking for a challenge
Replay Moderately High