Front Mission Evolved Review: An Entertaining Mech Shooter
by Annette Gonzalez on Sep 28, 2010 at 09:00 AM The Front Mission franchise has a limited cult following, but has struggled to find mainstream appeal. Reaching out to a bigger crowd, Front Mission Evolved ditches the previous entries' turn-based tactical gameplay in favor of third-person action. While a few signature series staples remain, such as a convoluted political storyline and tons of customization options, the fast-paced mech combat makes blowing the crap out of stuff far more accessible and fun.

You take control of a walking tank (or Wanzer) that can be customized to suit your play style based on speed, power, or durability. Part of the fun is tweaking these machines between missions, ensuring you aren't packing too much heat (overweight machines are about as good as scrap metal). I preferred strapping on a missile launcher and sniper rifle for ranged combat; slamming foes with exploding missiles while picking off limbs is effective and satisfying. If you lean more toward melee, you can equip oversized shields and blunt weapons for extra force and defense, handy when having to quickly power through tons of enemies to reach the next checkpoint. I found ranged assaults to be the most effective, but it is easy to adjust to other types as needed to survive specific scenarios. If you want to just jump into the action, you can select from a number of pre-built machines, but manually tinkering with the breadth of customization options ensures the highest probability of success.

The mission objectives are standard, but tight controls and performance-based difficulty scaling keep things enjoyable. You may need to speed boost across an entire level to survive a collapsing environment, man missiles aboard an aircraft, topple an enormous boss, or simply blast the hell out of everything in your path. Some scenarios require you to ditch the Wanzer and take out human opponents on foot -- missions I could have lived without. These sections slow pacing and combat mechanics aren't as tight as the mech battles. Once reunited with your Wanzer, however, you'll look forward to transforming your opponents into heaping piles of burning metal.

Front Mission Evolved offers four multiplayer modes that are average at best: deathmatch, team deathmatch, domination (take control of turrets), and supremacy (claim capture points). While chasing and destroying live opponents might be fun on launch day, the modes are not compelling enough to compete with other multiplayer offerings out there.

Front Mission Evolved isn't for everyone, and fans of the series may be disappointed by the deviation from tactical gameplay, but the action-focused formula works well enough to earn the series some new fans.

7.75
About Game Informer's review system
Concept
Turn your mech into the ultimate machine of destruction with accessible customization tools to suit your playstyle
Graphics
Mechs are varied and detailed, but the environments could use the same level of attention. Environmental objects don't feel like the right scale for the machine's massive size
Sound
Like something straight out of a Transformers flick
Playability
If you can play a third-person shooter, you can play this
Entertainment
Varied mission structures keep the action moving at a solid pace, at least until you ditch the mech for the on-foot sections
Replay
Moderately Low 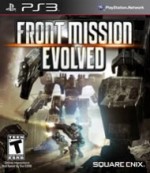