The oil economy. Stem cell research. Global warming. Today's hot topics are used to paint an unsettling future in Day 1 Studios' end of the world epic, Fracture. In the year 2161, the United States government has collapsed under the public's opposing ideologies of genetic and ecological research. Civil war erupts, leaving the eastern and western states morally opposed and at each other's throats. The west forms the West Republic of Pacifica, a faction deeply entrenched in forcing genetic evolution on its people, whereas the east, now called the East Atlantic Alliance, believes cybernetics will lead mankind to its next age.

Players don't get to pick a side in the conflict. The game places you in the role of Atlantic Alliance soldier Jet Brody moments before he embarks on a covert op deep within Pacifican territory. When Brody is introduced, the political intrigue, analogies to modern day issues, and any semblance of the plot continuing in an intelligent way are washed away and forgotten. The story devolves into level after level of lifeless radio chatter and uninteresting plot twists.

The story falls dead within minutes, but the game's ability to deliver mass destruction sends a pounding pulse through most of the action. With grenades specially designed to alter the shape of the terrain, battlefields are reshaped on the fly to look nothing like they did before you entered them. The terrain deformation technology is beautifully integrated into the firefights, allowing players to quickly raise a hill in front of them to provide protection from sniper fire, or to lower the ground so a pile of rocks loosens and tumbles onto an entrenchment of heavily armed adversaries.

This game also doesn't hold back on firepower. From land-changing grenades to its ridiculously powerful guns, there isn't a weapon in this game that won't put a devilish smile on your face. Great fun comes from blowing apart the terrain and anyone brave enough to stand on it, but a lot of the joy is dependent on player creativity.

Most of the AI adversaries don't know how to handle mid to long-range attacks, so it's easy to fall into the lazy routine of removing enemies from afar. As games have taught us, the path of least resistance is the key to victory, and Fracture gives you this cushion. As comfy as it is, sitting back in a safe zone isn't fun. The real excitement comes when you dive headfirst into battles with grenades flying. Depending on how you play, it can feel like a blase shooting gallery or a groundbreaking experience.

Solid controls allow players to dictate their fate on the battlefield, but the inconsistent auto-targeting can lead to some sure hits bouncing off of invisible barriers and headshots hitting the torso. The game's biggest problem, however, is its inability to pull players into the action. The non-aggressive AI coupled with the repetitive enemy clusters gets old quick. A vehicle level is introduced late in the game, and while it offers some high-flying and terrain deformation-related thrills, it's not enough to resuscitate interest in a game that makes you work hard for your enjoyment.

Fracture's multiplayer takes a cue from Halo's ''it takes a ton of hits to drop a foe'' design, so you really have to work for your kills. It's a good test of skill that makes you use grenades and a variety of weapons. The maps are designed with terrain deformation in mind, and usually end up looking like beautiful messes at the conclusion of a match. The match types are fun, but there isn't much depth to the multiplayer experience.

Fracture comes close to greatness, but the story's disappearing act, half-hearted approach to level design, and poor enemy AI holds it back from being anything other than mediocre. 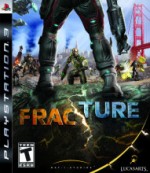 Fracture
Purchase More Info
7.5
i
Game Informer's Review System
Concept A standard shooter with some amazing terrain deformation powers
Graphics Jet Brody is a detailed character, but ends up looking like an Unreal reject. The terrain deformation produces some great visuals, but the environments don't catch the eye
Sound The excellent Star Wars-like soundtrack ups the intensity and is something I wouldn't mind throwing on my iPod
Playability Blowing the crap out of the ground may sound boring, but it is where most of Fracture's thrills lie, as the lackluster AI holds the shooting back
Entertainment Multiplayer is well done, but the single-player game is riddled with too many holes
Replay Moderate