Forza 6 feels like what Forza 5 could have been, correcting past wrongs by adding more cars, tracks, and night and rain racing. Ample racing and challenges wait around every corner, but this year more than ever, the series feels like it's stuck in that stereotypical sim-racing rut; it has lots of everything, but where's it really going?

The 460 cars and 26 track locations are more than welcome, giving the game a tangible boost over last year. The cars and the credits to buy them flow freely, and the tracks – apart from offering variety through location changes and new track layout challenges – are pleasing to the eye. The intro race at Rio jolts the senses with its brightly colored background and streaming sun.

The joy of so many cars and tracks is tempered by how the player accesses them. The career mode is linear, so players unlock racing series with increasingly powerful cars one at a time. This has a big effect on some of the systems. You win and buy cars as your driver levels up and earns more credits than you know what to do with. However, apart from using them in multiplayer or free ride, you won't be able to race all of them immediately in the career mode because the class of race some of them are rated for (D, C, B, etc.) won't unlock until later. This not only dampens having so many new cars at your disposal, but your access to the tracks as well. I'd rather the game open up its career series based on my driver level and/or how well I've done. That way I could fully utilize my garage and sample different racing series, determining for myself where I want to put my effort and credits – but that isn't the case here. At least this mode lets you choose which types of cars you want to use in each series (as long as they are of the appropriate class). In this way, Forza 6's career mode is somewhere between those in Forza 5 and Forza 4, but misses out on the prime advantages of both.

The career mode also mutes my enthusiasm for the game's new mods (cards you can apply as per-race challenges, vehicle upgrades, or credit bonuses) because I simply didn't need all the extra credits they provided. What use are credits if they buy cars I can't use immediately? I also wasn't motivated because the only race objective is to get third place, so you don't benefit by pushing yourself. Using mods to wring out that extra upgrade performance doesn't matter, since coming in first place all the time doesn't unlock the career's series any faster. Finally, in another quirk unintentionally watering down mods, too many of them offer the same bonuses or rewards, and even those labeled as rare are easy to get.

Racing during the night and rain is also new. The rain, while featuring visually impressive droplets streaking down your windshield, isn't much fun. It feels like you're sliding on ice; I like that the puddles can make you hydroplane, but otherwise you have to pussyfoot so much around the courses that it's not entertaining. At night your tires are cooler and have less grip, but it's not as much of a killjoy as the rain – just be careful you don't smash your headlights out. The rain and night courses inflate the overall number of tracks, since they are tied to specific courses rather than being variables for all of them.

Apart from the rain, Forza – as ever – is a pleasure to race. From the feeling of different cars' engine locations and even manufacturers, to gaining an understanding of why you are (or aren't) racing at your best, Forza 6 delivers on the track where it counts. The vibration feedback in the Xbox One controller is again a great asset, although I suggest you tinker with the tuning settings to truly get comfortable with your cars.

In a nod to fans' requests, the game has added periphery features such as the ability to sell your cars, pre-race tuning, and the aforementioned rain/night racing, but a lot remains curiously unchanged. Multiplayer still does not let you create dedicated public lobbies for racing with strangers based on myriad game options, instead sticking with private lobbies and the hopper system that automatically matches players according to pre-determined race types. Leagues have been added, but these are merely a device to match you with drivers of the same skill, and are not leagues you can create and play with your friends on your own like in other sports titles.

It's not a contradiction that Forza 6 is as fun as it is disappointing. Its faults and omissions do not make it a bad game or one that veers dramatically from the franchise's path. But what exactly is the series' philosophy? We've seen the career mode change from iteration to iteration, with the developer unable to define where it wants to go and therefore build upon a foundation in successive years. Turn 10 talks about its passion for cars, and that's evident on the track, but players have to feel it elsewhere, too. 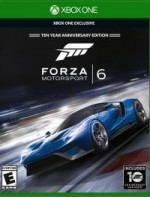 The latest iteration of the racing series adds more cars and tracks, but that doesn't solve its problems.

7.75
i
Game Informer's Review System
Concept Beef up some of Forza 5’s weaknesses, like the number of cars and tracks
Graphics The fictional city-based tracks such as Rio look the best, but the overall visual package is amazing
Sound Racing celebrity cameos show effort, but the script sometimes devolves into mumbo jumbo
Playability The effect of rain feels exaggerated, like ice. This can suck the fun out of those races
Entertainment New tracks and cars give you plenty to play with, but the re-styled career mode still doesn’t provide sufficient motivation
Replay High