Our romance with fast cars is all about feeling that spike of adrenaline as your speed increases, pushing you into a different physical plane. In a slightly more abstract sense, it’s about flying off to see new sights and escaping to new experiences. Video games aren’t that different. You’re still on the edge of your seat, driving by the seat of your pants, only you’re far more safe from danger than you would be if you were actually strapped into a 400-mph death trap. You also want to feel like all that driving is taking you somewhere.

The Forza series’ progression of rewards has always been one of its strong suits. The driver and car XP levels see to this. Win a couple races and not only does your driver get a new car, but shops give you a discount on parts. Add in the fact that the credit system is generous (even after you subtract some for repairs to offset the damage to your car), and Forza avoids becoming a grind like other sim racers. Turn 10 Studios also redid its menu system to make everything more visually inviting, and added a calendar to keep track of the racing events. These tweaks are small changes that greatly help the game’s pacing and show a vast improvement from Forza 2. One tiny criticism I have regarding the calendar system, however, is that the trio of events the game suggests for you aren’t your only options. To see everything you have at your disposal, you must back out of the season play menu and hit up the events list to check out all the races available. In general, you’ll go through your usual mix of multi-race series, manufacturer- or spec-specific events, drag races, and some killer marathons courtesy of Le Mans and Nürburgring. Needless to say about the Forza series, the driving is still tight.

The game’s calendar and progression system make the game very inviting, but I think the game misses a little by being – in some ways – too easy. What’s the point of rating races and cars by their performance level if there are numerous times that you can race a superior car in a lower event for an easy win? The automatic upgrades are great, but take away from actually buying those parts. Remember the cool discounts you won from manufacturers? I never went into a parts store because it was all automatically done for me. It’s hard to scoff at the accessibility, but in a sense, is the game working against itself? Add in the fact that rewinds are unlimited (I wish they were limited or you got fewer credits for using them), and Forza 3 trades letting you see everything it has to offer for a payoff that doesn’t feel as big.

I ate up everything Forza 3 had to offer. I raced hard through the streets of Italy’s coastal town Amalfi, taking in the game’s gorgeous sights and pushing the laws of physics around every tight turn. I spent lots of time in the garage adding layer upon layer to my cars’ custom graphics with the game’s easy-to-use tools. At the end of it all, however, I didn’t feel like I was light years ahead of any other game in the Forza series. Forza 3 redefines the franchise, but it definitely didn’t take me to anywhere I hadn’t already been before. 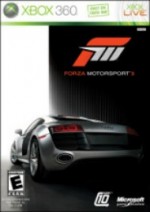 Forza Motorsport 3 has the speed, but where's it going?

Purchase More Info
8.5
i
Game Informer's Review System
Concept Like a brand-new car, Forza 3 exudes sexiness and sparkling excitement but drives about the same
Graphics Although the photo-realistic backgrounds look good, the cockpit textures are plain, and pop-up haunts horizon objects and car shadows
Sound If you think that Gran Turismo has a lock on all the smooth jazz and anonymous music you could handle, I’m sorry to say that you’re wrong
Playability I have no idea why in some cars’ cockpit view half your rear-view mirror is chopped off by the edge of the screen. Weird
Entertainment Forza 3 gets more accessible, but not necessarily more fun
Replay High