Although Forza Horizon is an offshoot of the sim racer, it captures a lot of what makes the base series notable. Car nuts, decal artists, and those looking for an intense racing experience will all feel at home in Horizon’s frontiers. Despite this game’s homage to the original Forza, it also strikes out on its own. The open world format allows Horizon to carve out its own niche in the larger Forza franchise, but it’s a title with its own boundaries.

In some ways, Forza Horizon gives racers the best of both worlds. A serious love of cars is married with a more accessible approach to the racing itself and progressing in the game. While hardcore drivers will still find the upper-echelon cars a challenge with all the assists off, those less skilled can still dial back the car handling at the expense of winning fewer credits at race’s end. Regardless of how you like to drive, however, Horizon makes finding a race easy.

Horizon Events tiers unlock by earning different colored wristbands, and while the game’s light story and characters are cheesy, they also open up other kinds of races. Showcase events are races against other machines like planes, Street Race Hubs are easy places to grind for cash, and you can race against Rival ghost cars from online profiles.

I was most impressed by the competition and progression inherent in the fact that skill points are constantly earned for all kinds of racing feats. Driving on two wheels, different kinds of drifts, close calls with other cars, getting air, and more upped my ranking in those categories, raised my popularity, and earned me more credits. It also fueled my desire to progress in the game and gave me a great sense of satisfaction.

The ease at which you earn skill points is matched by some convenient structural features. Horizon Outposts are locations you can fast travel to if you’ve completed that Outpost’s three objectives. If you don’t have the requisite car or need to upgrade it so it’s competitive, you can buy what you need without having to travel back to the garage. Credits are plentiful, and you become attached to your rides since even pedestrian cars can be upgraded to higher classes.

Despite Horizon’s overall accessibility, the game isn’t as accommodating as it could be. The open world game has some notable caveats. The Colorado landscape is gorgeous, but you can’t get too much of it (no) thanks to the many roadside guardrails that hem you in. This shrinks the map and limits how it’s utilized in the game. One of the effects of this is that Showcase races are pointless. Where’s the fun in racing against a plane if you can’t actually chart your own path to each checkpoint?

Being able to challenge other Horizon racers when you come across them in the world (only in point-to-point races) is fun, but beating them isn’t tied to your progress in the Festival. Moreover, the game’s single- and multiplayer portions are separate, so you can’t meet up with and race your friends like in Test Drive: Unlimited 2. That said, the addition of Forza’s online Playground games (including my favorite, Cat and Mouse) and the co-op challenges available in online Free Roam (like trying to get all eight players to cross a speed-trap camera at a requisite high speed) are really fun.

Forza Horizon is a well-crafted game that offers a fun racing experience that accommodates different approaches. It’s not a complete experience, but it’s a take on the Forza franchise that does the series proud. 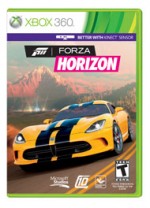 Forza Horizon's open world format allows it to carve out its own niche in the larger Forza franchise, but it’s a title with its own boundaries.

Purchase More Info
8.5
i
Game Informer's Review System
Concept Bring the Forza series’ love of cars to an open world format
Graphics The game has some stunning vistas (including real-time day shifts), and the cars are fast and smooth, too
Sound There are three radio stations: Bass Arena (electronic), Pulse (alt), and Rocks, as well as a fair amount of character voiceovers
Playability The difficulty assists let you tune the handling to Forza-like levels if you desire
Entertainment Horizon lets you explore the open world, but I don’t think it’ll sate your wanderlust
Replay High