Flinthook is something of a roguelike training regimen. Rather than present you with one long-winded, daunting task at the outset, it first presents you with a series of lighter, shorter challenges to let you dip your toe in the genre. It doesn’t nail the long-term replayability of the genre, but while you’re working toward the endgame, it offers the great thrill of just barely overcoming challenges that at first feel far out of reach.

Captain Flinthook is a plucky space pirate who uses a grappling hook to board ships and search for treasure – as well as something more personal. Grappling points litter most rooms, the floors of which are often hazardous. Propelling and shooting through a room without touching the ground is usually difficult due to the number of spiked balls, lasers, and enemies you encounter, but the feeling of threading the needle and blasting apart every enemy in sight without a scratch never gets old.

The speed of grappling makes it hard to do that consistently, but that’s where Flinthook’s ability to slow down time comes in. The meter which governs its use is fairly short (about a second or two by default) but refills quickly, making it indispensable for pulling off the kind of tight-knit maneuvers some rooms require of you. Putting it all together takes some time, though. The controls take some getting used to, and before I unlocked some of the available powerups or learned to scan a room for traps, clearing even one ship was difficult. But as I built up my strength and learned how to use every tool at my disposal, I began making more headway per run.

Because each ship (made up of several rooms) is randomly generated, combat encounters are always different, which gives Flinthook a great sense of variety. Play long enough and enemies become familiar. But you also begin to recognize them as pieces of a larger challenge; some enemies do nothing but take up space but become more dangerous when protected by shield-generating allies and a sea of cannons. In many cases, the room you’re fighting in is a bigger obstacle than the monsters you’re fighting.

As you level up between runs, you unlock equippable perks and permanent upgrades that take some of the edge off. Some simply boost your stats, but others offer larger gunshots, a healing item between levels, or a one-time revive. These perks make progress much easier, and should give anyone the tools they need to make it through the harrowing trials later on; without spoiling too much, I was able to outlast the final boss by simply standing there and shooting at him, since I invested heavily in health. That anti-climactic ending came after a long streak of successes I didn’t think I had in me, though, and I was still pumping my fist when the credits rolled.

That triumph came a little too quickly, however, and while I still had plenty of perks, upgrades, and more to unlock, I didn’t feel the need to. By the time I’d finished the game, I saw rooms repeat numerous times, which made them feel more like work than a fun challenge. You can tackle harder versions of every boss, daily and weekly challenges, an infinite mode, and search for secrets and lore that fleshes out Flinthook’s plot, but none of these extras felt enticing enough to run the same missions over and over for.

That’s an issue because even after 13 or so hours of grappling and time-slowing my way to victory, I still wanted more excuses to play Flinthook. Grappling around each room and deftly making split-second moves still makes me feel nimble in a way other platformers don’t, and the feeling of finally defeating a boss after several failed runs is a reward worth chasing, even if you can’t pursue it for too long. 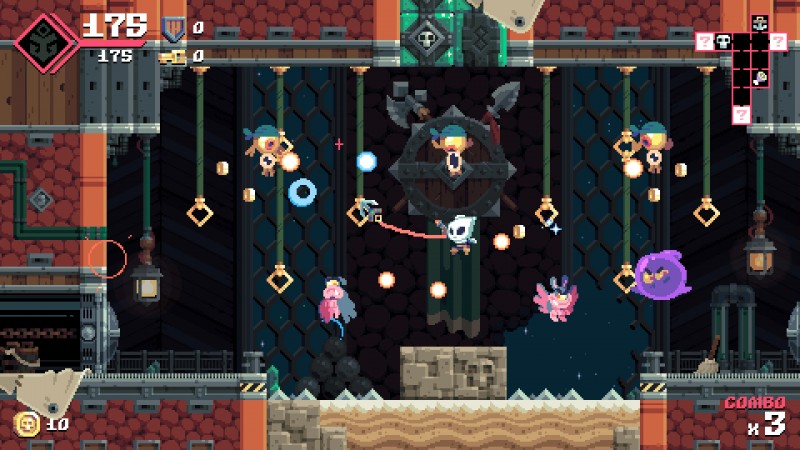 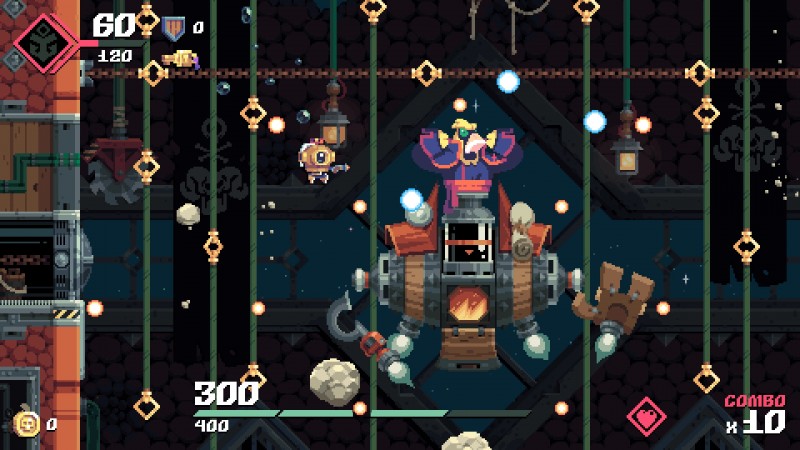 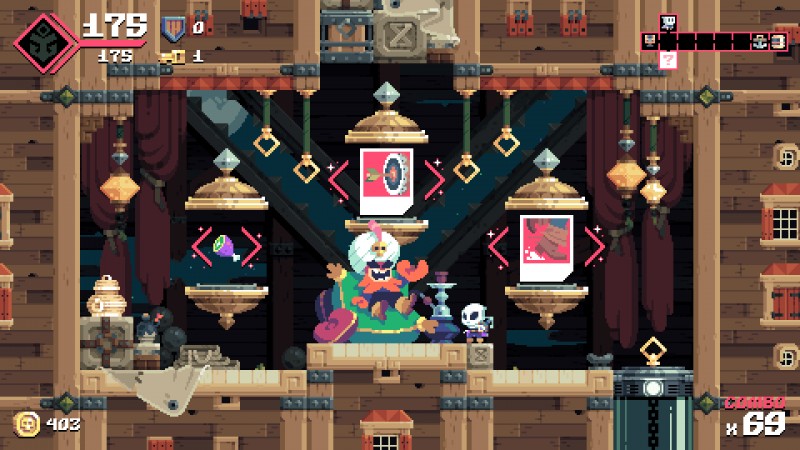 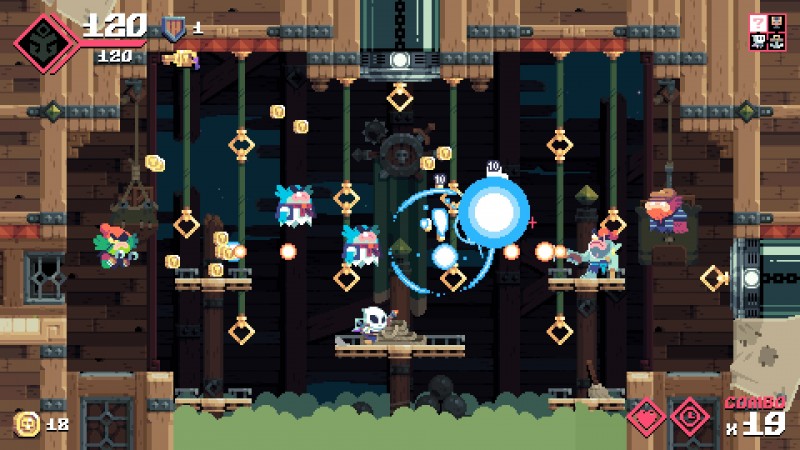 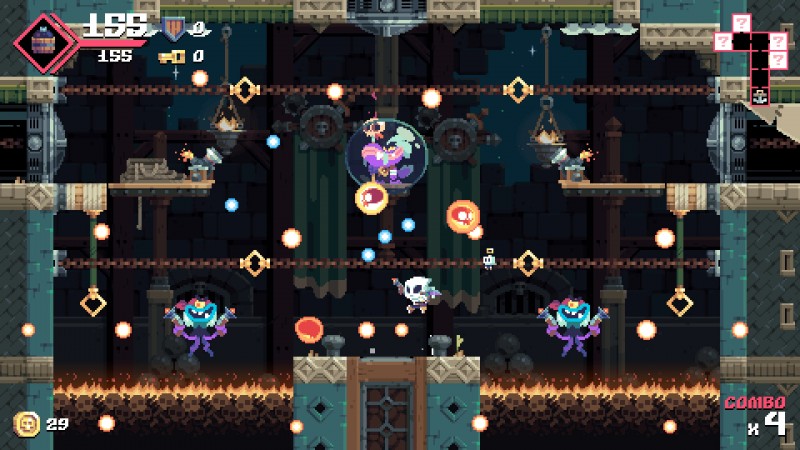 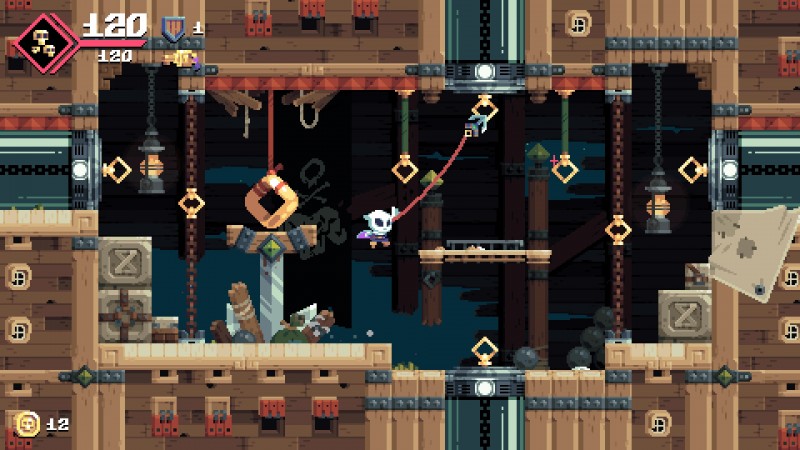 7.5
About Game Informer's review system
Concept
Raid space pirate ships with a grappling hook, a time-slowing belt, and a number of customizable perks
Graphics
Every pixelated ship is intricate and littered with items, but you don’t get too much visual variety
Sound
Upbeat chiptunes distinguish regular navigation, locked-door fights, and bosses. The menu music is a particularly catchy earworm
Playability
Moving and aiming on the same analog stick takes some getting used to, but the slow-motion and grappling hook abilities make the game precise and fast
Entertainment
Building up your stats and skillset between runs is a great reason to keep playing, though the lack of content may leave anyone not interested in high scores wanting
Replay
Moderately High