Final Fantasy: The 4 Heroes of Light employs old-school basics to recapture the charm of a bygone RPG era. From the predictable plot to the four heroes, this spin-off takes inspiration from the minimalist approach of the 8-bit Final Fantasy titles. Nostalgia may be a powerful force, but it isn’t enough to make The 4 Heroes of Light worth remembering, fondly or otherwise.

Developed by the same team that handled the DS remakes of Final Fantasy III and IV, this game could be said to have a classic vibe, but that’s being charitable. Everything about the adventure is pulled straight from the big book of RPG tropes – Desert town? Spoiled princess? No way! Nothing about the characters or plot is surprising.

Without a strong narrative to draw you in, all you’re left with is a wreck of a battle system thrown into this by-the-numbers adventure. On one hand, the turn-based combat tries to be simple and accessible; the job system is easy to understand, and the elimination of MP means you aren’t constantly managing resources. At the same time, the limited inventory space and rough boss encounters will leave you longing for basic features found in just about every real RPG made since the late ‘80s.

The worst offender is the targeting – or the lack thereof. You can’t specify which enemies you attack or which allies you heal. Instead, you select the action you want to perform, then place your trust in whatever hidden, under-the-hood calculations the system uses to determine your target. It does okay most of the time, but fails frequently enough that you can never formulate reliable strategies.

Four-player co-op could have patched some of these wounds, but it doesn’t. The local-only multiplayer is only good for grinding, since only the host can make story progress (and you can’t save until you exit the whole mode!). Your core party isn’t even static, so you may only be able to do two- or three-player co-op, adding an extra barrier to playing even if you and three friends are sitting on the same couch.

What this experience lacks in novelty, it makes up for in frustration. Your objectives are often left unclear, and when you figure it out, you’re rewarded with clunky battles and a story you don’t care about. Final Fantasy: The 4 Heroes of Light isn’t glitchy or broken, but that’s the highest compliment I can muster. 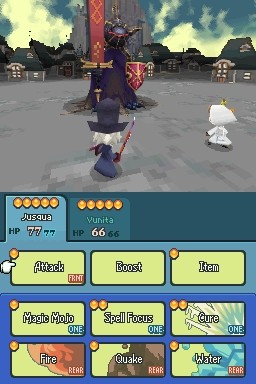 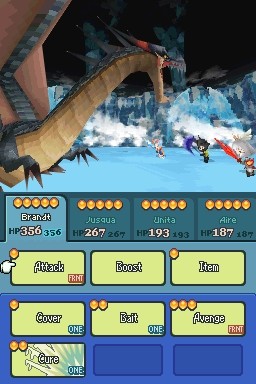 6
About Game Informer's review system
Concept
Make an RPG that ignores all advances in game design from the last 20 years
Graphics
Some cool visuals in towns, but the charm of this style is wearing off
Sound
The music is my favorite part of this whole game, bringing back fond memories of old-school Final Fantasy soundtracks
Playability
Why won’t you let me select which enemy my characters attack? Why?
Entertainment
If you want a classic-style RPG, play a real one instead of this imitator
Replay
Low

Final Fantasy: The 4 Heroes of Light