I’ve had a chance to review many games over the years that were varying shades of broken. I’ve encountered countless freezes, buggy updates, and mindless AI. As unforgivably awful as some of these games have been, at least I can say that I’ve always been able to accurately make menu selections in them. Your greatest opponent in Fighter Within is the Kinect motion recognition, which makes a task as simple as choosing “continue” or “quit” an ordeal.

Most of the time, you are probably trying to select “quit.” After only a few minutes with this train wreck, you'll never want to continue. In theory, it’s a fighting game that features trademarks of the genre like throws, counters, and combos. In practice, it’s a whole lot of flailing at your television as you watch your character perform approximately zero of the things you want him to. At one point, I stopped flailing mid-match in order to take some notes. As I stood perfectly still and typed on my phone about how awful this game is, my character continued to attack my opponent without any intended input from me.

Fighter Within’s terrible controls effectively make any of its combat systems inconsequential. On paper, you should be able to perform combos by landing consecutive hits, counter attacks with a specific motion, and throw your opponent by sticking your arms out in front of you. You won’t be able to do these things reliably. If your opponent blocks several of your attacks in a row, it activates an auto counter. This makes sense, but becomes infuriating when Kinect thinks you’re throwing repeated attacks when you’re not meaning to – but you still get punished for the technology’s failure.

From its unreliable (or non-functional) mechanics to its doofy character designs and hilariously bad writing, Fighter Within is garbage. It fails to operate on any level, and the content isn’t deep enough to be fun even if everything worked. If you were hoping for an Xbox One launch title that shows off the technological leaps made by the new Kinect, you certainly won’t find it with Fighter Within. 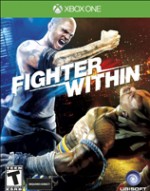