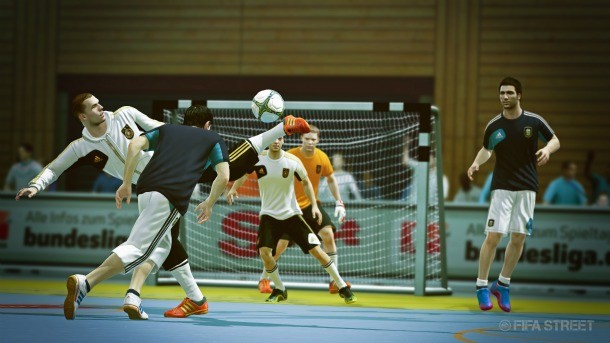 Despite its non-numeral title, this isn't the first FIFA Street ever created. The series predominately existed in the last console generation, but it's probably just as well that EA Sports is pretending they never existed, because they weren't that good. Luckily, time has been kind to the series. The fundamentals may not be all that different, but at least this FIFA Street contains a modicum of street soccer's creativity.

As you might expect, the career structure of the game is nothing surprising: You travel around the world playing against fictional and real-world clubs and players, building up your own squad of footballers. There are a variety of attributes you can increase, as well as skill moves and celebrations to unlock. Although it can be frustrating that you unlock individual moves only after you've attained the requisite skill level, there are plenty of tricks you can deploy against your opponents so you never get bored on the pitch. In particular I liked the play styles, which let you do things like defend against nutmegs, diving headers, and spectacular saves.

Performing your arsenal of tricks is relatively easy for anyone who's accustomed to EA Sports' right analog control system of flicks and half-circles, and the skill and pride comes in being able to accurately select the right move for the correct situation. Some tricks take longer to perform than others, and the seasoned player will know what's appropriate for the moment. A big help is the L2/left trigger control that allows you to shield the ball from attackers when they get close to you, and further variance is enabled with L1/left bumper-enabled Flair shots and passes. There's a lot for you to choose from, and putting it all together and making your opponent look like an absolute chump fills this game with some priceless moments.

Although knowing how much time and space is needed for any given animation to run is important, the frustration you'll feel with FIFA Street comes from the fact that your player's interactions with the ball and other players onscreen can be clumsy and forced. Loose balls can be hard to pick up because the AI has determined it should go to another player, manually scrolling through which player you want to control can cost you valuable time, players can get knocked down for unknown reasons, and oftentimes you simply feel a second or two behind the action as your men finish up their animations. These issues were also indicative of FIFA games from a few years ago.

While the game doesn't veer from its focus on simply giving you a roster of moves to unleash on opponents, I was surprised to find that its different game types actually altered the way I played the game.

Panna: This game type encourages you to nutmeg anyone in your way. The more you do so the more points you bank. Score a goal and all the points in your bank are awarded to you. If you get scored on in the meantime, however, you lose all the points you've accumulated. It's a cool risk/reward game type.

Last Man Standing: It may sound pretty straightforward, but this game type actually works in reverse. Score a goal and your side actually goes down a man.

Futsal: This is a real-life street ball game that's played on a hard floor, but it doesn't have walls like your normal street arena. This is key because since you can't bank the ball around, your shots, passes, and moves have to be even more calculating, lest you do something that puts the ball out of bounds and causes you to lose possession. Futsal also features fouls, unlike the other game types.

FIFA Street's online portion offers a divisional structure of 15 divisions complete with relegation and promotion (a season is 10 games), but I think it errs in a few key ways. First off, although you can win bragging rights as you climb up the divisions (and earn trophies in the game's Cup tourneys), I'm surprised you can't win in-game apparel, poach players, or get something for climbing to the top of the table (FIFA Street does, however, let you download your friends' players). I'm also disappointed that although the game has a version of Need For Speed's Autolog, it doesn't post challenges for you to topple.

This series hasn't diverged wildly from its roots, but at least it's finally fashioned itself into the creative, trick-filled game it was always supposed to be, but never really achieved. 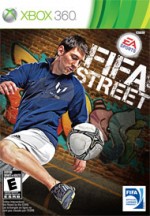 This series hasn't diverged wildly from its roots, but at least it's finally fashioned itself into the creative, trick-filled game it was always supposed to be.

Purchase More Info
7.25
i
Game Informer's Review System
Concept Revive the FIFA Street label that has had little success in the past. Are things different now?
Graphics The gameplay is naturally based on animations, and these range from smooth to clunky
Sound You can choose the accents for your players, but their chatter isn't always timely
Playability The moves are sweet and relatively easy to pull off. Navigating the subsequent animation tree, however, can be hit or miss
Entertainment This version of FIFA Street captures some of the fun and freedom that past titles have lacked, but this is ultimately limited by the game's reliance on animations
Replay Moderate