Note: The main text is from the current-gen review, and the additions from the PlayStation 4 version have been added below. 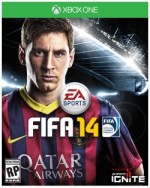 Take a look at how the PlayStation 4 version differs from the already accomplished current-gen release.

8.75
i
Game Informer's Review System
Concept Add on to the current-gen version; mainly in the presentation and gameplay departments
Graphics The game looks pretty sharp, but I wouldn't say it's jaw-dropping
Sound The crowds are noticeable in their volume but not their smarts
Playability Players' footwork is very well done
Entertainment The PS4 version is better than the current-gen ones. However, hopefully the next iteration will hopefully represent a bigger step forward
Replay High